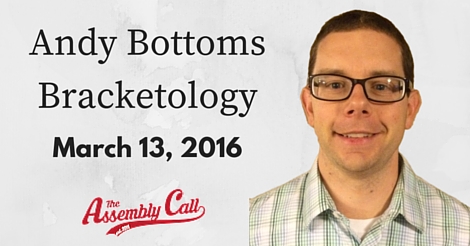 Editor’s note: Below are this week’s bracket projections from  Andy Bottoms, the #1 bracketologist in the world, according to Bracket Matrix.

A few minor adjustments following the first three championship games of the day.

Kansas is officially locked in as the top overall seed after winning the Big 12 Tournament. That might be the only thing I’m certain of at this stage.

If Michigan State wins the Big Ten Tournament today, they can lock up a top seed. I’m not sure there’s anyone playing as well as the Spartans right now, which comes as a shock to no one.

Despite a .500 record against the Top 50, I am giving North Carolina the nod in the East. The Heels won the ACC regular season and tournament title and look to be finally fulfilling their lofty pre-season expectations.

For the final top seed, I’m going with Oregon for now, although it’s close between the Ducks and Virginia. Like Kansas and North Carolina, the Ducks won the regular season and tournament titles in the Pac-12 and have racked up a gaudy 20 Top 100 wins in the process. They do have a pair of sub-100 losses, but early season injuries were a factor there.

As for Virginia, they have plenty of top-end victories, but they also have a losing road record and four losses to teams that won’t be in the field.

Just one potential bid thief remains, which means bubble teams across the country will be rooting against Memphis in the AAC Championship this afternoon.

More on the last four in and first four out below, but there is very little distinction between the teams at the bottom of the at-large list. Who makes it will tell us a lot about what this year’s committee valued.

Here are my projections through the games from March 12. I’ll be making one more update this afternoon before the bracket is announced.

The Hawks are hoping that aggressive scheduling, a strong performance in the non-conference, and 13 road wins will help offset three sub-200 losses.

In contrast to Monmouth, the Gaels didn’t really challenge themselves in the non-conference, losing their only true road game at Cal. Still, they have six Top 100 wins, a regular season sweep of Gonzaga, a winning road record, and solid Pomeroy numbers, which hopefully offset a not-so-great strength of schedule.

The Owls accomplished very little against a tough non-conference schedule, finishing just 6-6. In AAC play though, they finished 5-1 against SMU, Cincinnati, and Connecticut, which feels like enough to land them in the field.

The Orange are the team I have struggled with the most. On the one hand, they have a solid quartet of wins (St. Bonaventure, Texas A&M on a neutral court, at Duke, and Notre Dame). On the other, they are three games under .500 against the Top 150 and have a 3-8 road record. Throw in the Boeheim suspension and this is a tough one to sort out.

If there’s a somewhat surprising team to miss the cut, I think it’s South Carolina. The Gamecocks have a horrific non-con strength of schedule and just one Top 50 win. They do have an 8-5 mark against the Top 100 and 13 wins over the Top 150.

Following a loss to Purdue on Saturday, times are tense in Ann Arbor. They have four great wins but are just 4-12 against the Top 100. While they don’t have a bad loss, a low total of quality wins and the fact that 11 of their 12 losses have come by at least nine points with 10 by double digits. The other concern is the non-conference strength of schedule, which ranks around 190th. Outside of a win over Texas, the best non-con victories came against North Carolina State and Elon.

The Aztecs are another regular season champ that came up short in tournament play. They have a great win over Cal but are just 3-7 against the Top 100. Losses to Grand Canyon and Boise State at home aren’t ideal, and a sub-300 loss to San Diego in a game played at Petco Park is another black eye. SDSU comfortably won the Mountain West, but in a down year that doesn’t carry quite as much weight.

Vandy does boast home wins over Kentucky and Texas A&M as well as a sweep of Florida, and their KenPom numbers are solid. In the end they are just 9-13 against the Top 150 and accomplished very little in the non-conference. They also finished 3-9 in true road games, which combined with other factors make them a long shot.