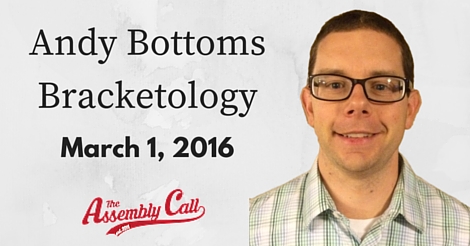 Editor’s note: Below are this week’s bracket projections from  Andy Bottoms, the #1 bracketologist in the world, according to Bracket Matrix.

Programming note: Andy will be talking bracketology on this week’s Midweek Edition of The Assembly Call, which is hosted by our student interns Josh Eastern and Michael Dugan. Galen Clavio of Crimson Cast will be joining them as well.

The live broadcast will begin at 6:30 p.m. Eastern Time and can viewed here. You can also subscribe to The Assembly Call on iTunes and listen to the podcast.

If you’re reading this before scrolling through Jon Rothstein’s Twitter feed, let me be the first to tell you that “This is March.”

We’re a mere 12 days from Selection Sunday, and you could argue that three of the top seeds are still up for grabs. Throw in a couple compelling mid-major cases and a weak but crowded bubble, and it certainly seems like we’re in for an entertaining dozen days.

After earning a 12th straight Big 12 Title and boat-racing Texas on Monday night, Kansas seems to have cemented its spot as the top overall seed.

I can’t see two Big East teams landing one seeds when it’s all said and done, although I would have had it projected that way for now if Xavier had been able to win at Seton Hall on Sunday. As it stands, Villanova remains on the top line heading into the final week of the regular season.

Virginia’s win over North Carolina on Saturday night propelled the Cavaliers to a one seed on the strength of six Top 20 victories.

For now, I have Oklahoma clinging to the final one seed with Michigan State nipping at the Sooners’ heels. Despite their recent struggles, OU boasts seven Top 25 victories on the season. That said, the Spartans are playing as well as anyone in the country right now. They’ve won eight of their last nine, with each win coming by at least nine points. Don’t be surprised to see Sparty wind up on the top line on Selection Sunday.

Wichita State, Monmouth, Saint Mary’s, Arkansas-Little Rock, and Valparaiso made it through another week without losing and seem to be the quintet of non-power conference teams in the at-large conversation. Some of their cases are stronger than others, but deep conference tournament runs are imperative for each.

I’ll hit on most of the other pertinent bubble teams in the last four in and first four out below the bracket.

Here are my projections through the games from February 29.

Compared to other bubble teams, the Crimson Tide actually have more than one or two good wins. In fact, they currently have five against the Top 50. Even so, Alabama is just 6-9 against the Top 100 and are only one game over .500 versus the Top 200.

The strength of schedule numbers are solid as well, but the Crimson Tide have to take care of business this week in winnable games against Arkansas and Georgia.

The Bulldogs have formally taken up residence in this section of the bracket. They have victories over Purdue and Seton Hall as well as fellow bubblers Cincinnati and Temple, but they are only 5-8 against the Top 100.

If the Bulldogs can sweep home games against Seton Hall and Marquette this week, Butler can give itself a little breathing room heading into the Big East Tournament.

The Wolverines split games against Northwestern and Wisconsin last week, and Saturday’s finale against Iowa is their last chance at another quality win before the Big Ten Tournament. While Michigan doesn’t have a truly bad loss, its three Top 30 victories are its only wins against the Top 90.

A season-ending win over Iowa and a solid showing in the conference tournament should get Michigan in the field, but anything less will leave the Wolverines sweating it out.

If not for Sunday’s loss at Memphis, the Golden Hurricane would have been more safely in the field. Even so, they have a pair of Top 40 wins and a 7-8 mark against the Top 100.

A pair of sub-100 losses leave little margin for error heading into the season finale against South Florida on Saturday. Then Tulsa heads to the AAC Tournament, which looks like it’s going to have huge bubble implications.

Outside of non-conference wins over Saint Joseph’s and West Virginia, the Gators have no wins against the Top 80. That, coupled with a 3-8 road record, has Florida in a precarious position. Sure, the Gators have just one bad loss (at Tennessee), but at some point the volume of quality wins just isn’t there.

As a result, Tuesday’s home date with Kentucky is quickly turning into a must-win for the Gators since their final game at Missouri won’t do much for their profile.

The Zags are still alive thanks to a win at BYU on Saturday, and there’s no question they would have needed to win the WCC Tournament had they finished 0-4 against Saint Mary’s and BYU. I’m still not convinced they don’t need the auto-bid anyway, but a run to the finals might at least make things interesting.

The Bonnies avoided bad losses this week with wins over Duquesne and UMass, but the fact remains they have just three quality wins over Saint Joseph’s, George Washington, and Dayton. Luckily two of those came on the road, but there just isn’t enough quality there to offset losses to Siena, Duquesne, and La Salle.

Wednesday’s rematch with Saint Joe’s provides another chance at a Top 50 win before finishing the season at Saint Louis. Much like the AAC Tournament, the A-10 Tournament is going to have huge bubble implications.

Last week’s loss at George Mason certainly doesn’t help matters for the Rams, but they did bounce back to win at George Washington over the weekend. Even so, VCU was unable to pick up quality wins in the non-conference, and they have a pair of ugly losses on their profile as well. Wins over Saint Joseph’s and St. Bonaventure, but the Rams are still just 5-6 against the Top 100.

This is a huge week for VCU, as games against Davidson and Dayton provide two more opportunities for Top 100 victories.