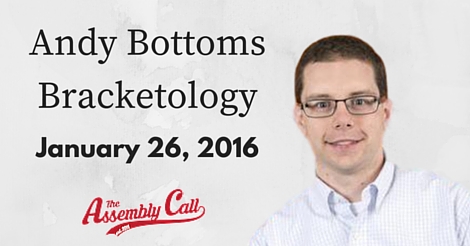 With less than seven weeks until Selection Sunday, I’ll be doing weekly projections from here on out. And based on the number of upsets and the revolving door atop the polls, bracket projections will be fluid to say the least.

Last time around I categorized three of the top seeds as no-brainers, and only one of those (Oklahoma) remains on the top line of this week’s projections.

The Sooners have an impressive resume, with their only losses coming in triple-OT at Kansas and on the road against Iowa State. They boat-raced Baylor on Saturday and have most of their toughest remaining games at home, which has OU in position to finally unseat the Jayhawks atop the Big 12.

North Carolina was projected by many as the top team coming into the season, and the Heels now sit at 18-2 with a 7-0 mark in the ACC. Marcus Paige is healthy again (although he’s struggled of late), and Brice Johnson is averaging a double-double.

Iowa has been the biggest surprise of the season from my perspective. Led by Jarrod Uthoff, the Hawkeyes have already swept Michigan State and Purdue in Big Ten play, and if not for a late-game meltdown at Iowa State, Iowa would be riding a 14-game winning streak right now.

Had Kansas knocked off Iowa State on Monday night, the Jayhawks would likely have been the final one seed, but they’ve now lost three of their last five games, including an ugly blowout loss at Oklahoma State.

Villanova was also poised for a top seed but fell at home in overtime on Sunday against Providence. The Wildcats still have a strong case with no bad losses, six Top 50 wins, and 10 wins against the Top 100. I wouldn’t be the least bit surprised to see Villanova wind up with a one seed.

With all that in mind, I wound up leaving Xavier as the final top seed.

The Musketeers suffered a disappointing home loss to Georgetown last week, but they still have a very strong profile. Non-conference wins over Dayton, USC, and Michigan are outstanding, and their only other loss came at Villanova when Edmond Sumner went down in the first few minutes of the game. The return bout at Xavier could have huge seeding implications.

Like the rest of the bracket, expect a lot of change at the top of the seed list over these next few weeks.

Similar to the first set of in-season projections, the last handful of at-large bids are a crapshoot.

Some teams have solid wins coupled with inexplicable defeats, while others have just managed to avoid bad losses. Regardless, you can talk yourself into or out of basically any of the last six or seven teams in and the final five teams out.

As for the single-bid leagues, I still tend not to simply default to the current conference standings for these conferences. I’ll factor in a combination of the results to date as well as my preseason projections to sort these out for now.

Here are my projections through the games from January 25.

I’ve also listed my last four in and first five out along with my reasoning for those selections.

The Zags have already dropped two WCC games, and at this point there is legitimate discussion as to whether they need to win the auto-bid to go dancing. They are 0-4 against the RPI Top 50, and outside of wins over fellow bubblers UConn and Washington, there just isn’t much on the profile.

Gonzaga needs to take care of business over its next five games leading up to a trip to previously unbeaten SMU in February.

After a surprisingly strong start, the Red Raiders have dropped five of their last six. A home win over Texas helps, but otherwise Tech’s best wins are all against solid mid-majors like South Dakota State, AR-Little Rock, and Hawaii. A Tuesday road trip to Oklahoma doesn’t bode well for getting back on track either.

The Pirates picked up a terrific road win at Providence, but that’s their lone win over the last five games. Seton Hall has just three Top 100 wins and is only 6-6 against the Top 200. The upcoming schedule is manageable with four of the next five games at home, so the Pirates have a chance to play themselves off the bubble one way or another.

If not for four two-point losses, the Bearcats could be safely in the field, but their struggles to close out games have them on the bubble. Like Seton Hall, UC has just one Top 50 win, but they don’t really have any bad losses.

No one has seized control in the American, and the Bearcats can stake their claim if they perform well with three of their next four on the road, starting Thursday at UConn.

After losing four straight to start ACC play, the Orange turned things around to win three straight before having that streak halted in a close game at Virginia. Top 30 wins over Texas A&M and Duke certainly help their case, but an inexplicable loss to St. John’s is a black mark on their profile.

Syracuse starts a four-game homestand this week, and the Orange have a strong chance to win their next five games leading up to a mid-February trip to Louisville.

The Noles have a pair of Top 25 wins, but have dropped two straight after knocking off Virginia. They are just 4-7 against the Top 100 and need to take care of business with three winnable games up next.

After a poor showing against a weak non-con schedule, Clemson reeled off consecutive wins at Syracuse and then at home over Louisville, Duke, and Miami before losing at Virginia. That stretch catapulted the Tigers into the at-large conversation, but their non-conference schedule leaves little margin for error. The next four games will be key, with a home date against Pitt followed by a three-game road trip.

The Cardinal are essentially Clemson lite. They didn’t beat anyone in the non-conference, although their schedule was tougher than what the Tigers faced. They’ve also pulled off some nice wins in Pac-12 play, with victories over Utah, Oregon State, and Cal, which are a notch below Clemson’s core wins.

Like most teams in the Pac-12 though, Stanford can’t seem to string together wins, and that won’t get any easier with the next three games on the road versus Colorado, Utah, and Cal.

The Broncos have lost just once since late November, including a key win over Oregon. Outside of a season-opening loss at Montana, there really isn’t a bad loss on Boise’s profile, but just two Top 100 wins and a down year in the Mountain West would suggest they can’t afford to drop many more games.