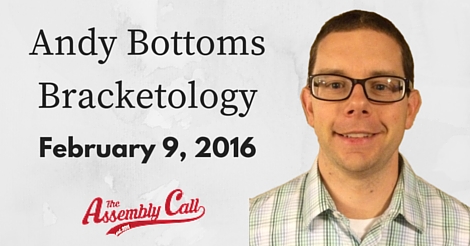 As if knowing that Selection Sunday is now less than five weeks away wasn’t enough, this week provides extra excitement for me.

On Thursday I’ll be heading to Indianapolis for the NCAA Mock Selection Exercise, which will give me and the other media members in attendance the opportunity to see what it’s really like to select and seed the field.

In addition to taking my nerdiness to a new level, it will also give me the chance to gain a better understanding of what truly matters to the committee while learning the ins and outs of the process.

I’m particularly intrigued by how the cases of teams like Wichita State, Monmouth, LSU, and Clemson will be handled. And how does Jim Boeheim’s suspension impact Syracuse? What about those unbalanced schedules in some major conferences?

I’ve got a lengthy list of questions already, but feel free to tweet me (@AndyBottoms) questions you have about the process, and I’ll do my best to answer them as we go along.

With top teams suffering losses at a record pace, it’s worth taking a deeper look at the top line. This week I evaluated five teams – Iowa, Kansas, Oklahoma, Villanova, and Xavier – for the four number one seeds.

The Hawkeyes have six Top 40 RPI wins, including sweeps of Michigan State and Purdue, and they have yet to lose a game to anyone outside of the Top 25. They also haven’t lost by more than six points and have suffered just one defeat since December 10th, when they allowed a late comeback at Iowa State.

Kansas boasts seven Top 50 wins, and three of their four losses have come against teams currently in the RPI Top 20. The knocks on the Jayhawks include a 19-point loss at Oklahoma State and the fact that the team’s six best RPI wins have all come at home. Overall, they are just 5-4 away from The Phog.

Buddy Hield’s heroics on Monday night against Texas helped Oklahoma avoid a second straight loss. The Sooners now have four Top 20 victories and 10 wins against the Top 100. Losses in triple-OT at Kansas and by five points at Iowa State don’t hurt OU’s case, and even their other loss was on the road against a Top 50 team in Kansas State.

This Saturday’s rematch with the Jayhawks is appointment television.

Villanova is playing as well as anyone in the country right now, and their computer numbers back that up. The Wildcats are ranked first in RPI and second in the Pomeroy rankings after going 12-1 in their last 13 contests with the lone loss coming in OT against Providence.

Jay Wright’s club is 7-1 in true road games and 9-2 away from home, but they have just one win against the RPI Top 30 (although they do have six against the Top 50). ‘Nova doesn’t have any bad losses, but it’s also worth noting that they lost to Virginia by 11 and Oklahoma by 23 back in December.

Then you have Xavier, who is one of only three two-loss teams remaining. One of those losses was a blowout at the hands of Villanova in a game where starting point guard Edmond Sumner went down in the opening minutes. The other loss came at home against Georgetown.

But the Musketeers offset those losses with a 9-1 road/neutral record and four wins against the RPI Top 35. That includes neutral court victories over Dayton and USC, which continue to look better as the season goes on. From an eye test perspective, it’s worth noting that the Musketeers didn’t look great last week in home wins over St. John’s and Marquette.

In the end, it came down to Kansas and Xavier for the final top seed for me. The Jayhawks have slightly better computer and strength of schedule numbers, and they have better (and more) top end wins.

Ultimately any of these teams has a strong case, and hopefully the picture will clear up down the stretch.

Louisville’s recent post-season ban opens up a spot for one more bubble team, and while the number of teams in the mix seems to be dwindling, it’s still a bit of a mess.

LSU and Clemson are two of the more intriguing cases, so I tried to see what kind of precedent I could find in recent years. More on those in the last four in and first four out section below the bracket.

As for the single-bid leagues, we’re at a point where it seems prudent to start using the current standings. In the case of a tie, I looked for head-to-head matchups, so in the Ohio Valley as an example, Tennessee Tech gets the nod due to a win over Belmont in their only meeting so far this season.

Here are my projections through the games from February 8.

The Zags have now won five straight, but with two WCC losses and no Top 45 wins, it feels like Saturday’s trip to SMU is a must-win. If they can pick up a victory there and avenge losses against BYU and Saint Mary’s down the stretch, Gonzaga will be in much better shape for an at-large bid.

Just when I thought the Bearcats were starting to turn the corner, they dropped another close game at Memphis over the weekend. That’s now five losses by four points or less for UC.

Non-conference wins against George Washington and VCU as well as a road win at UConn are keeping the Bearcats afloat for now, but they can ill afford to drop either of their next two games against Central Florida and East Carolina. After that the Bearcats will go for season sweeps over Tulsa and UConn.

I set out to try and find a recent comp for the Tigers this week, and the 2010-11 USC Trojans seem like a reasonable one.

USC dropped non-conference games to the likes of Rider, Bradley, Nebraska and TCU on their way to a 6-4 start. At that point transfer Jio Fontan became eligible, and in his first game they nearly knocked off Kansas. The Trojans finished 10-8 in the Pac-12 and eventually earned a spot in the First Four.

LSU is 11-4 since both Keith Hornsby and Craig Victor have been available, including wins over Kentucky and Vanderbilt. The Tigers also took Oklahoma down to the wire, and the only bad loss during that stretch came against Wake Forest.

This week is a huge one for LSU with a road trip to South Carolina followed by a home date with Texas A&M.

The Bulldogs responded with wins over Georgetown and St. John’s last week, but there still isn’t much meat on their profile. A neutral court win over Purdue looks great, and a win at Cincinnati helps for bubble purposes. Even so, Butler has just four Top 100 victories but also has sub-100 losses at Creighton and Marquette.

Much like LSU, this is a huge week for Butler with a road trip to Seton Hall on Wednesday before hosting Xavier over the weekend.

Last week’s 10-point home loss to St. Bonaventure was just the fourth of the season for Saint Joe’s, but the issue is the complete lack of quality wins.  The Hawks have no wins over the Top 60, and their three Top 100 victories came against Princeton, Temple, and Buffalo.

Perhaps a larger issue is that there are really just two more chances for Saint Joe’s to pick up quality wins (at George Washington and home vs. Dayton), both of which come over the next three games.

The Badgers have managed to play their way onto the bubble with five straight victories, including home wins against Michigan State and Indiana.  Non-conference victories over VCU and Syracuse are looking better as well, as Wisconsin now has a 7-5 record against the Top 100.

That said, they still have four pretty ugly losses, but most importantly, the remaining schedule is brutal with road trips to Maryland, Michigan State, Iowa, and Purdue to go along with a home date against Michigan. If Wisconsin goes dancing, they most certainly will have earned it.

This is one of the more interesting cases out there. The Tigers were nothing short of terrible in the non-conference, but they’ve also ripped off six Top 50 wins in ACC play. Still, their RPI sits in the 80s, and since 2009, just seven teams have earned an at-large bid with a rank of 60th or worse. The highest of those was the aforementioned USC team from 2010-11, who was 67th on Selection Sunday.

The Tigers missed a chance at another marquee win against Notre Dame on Monday night. Five of their remaining six games are ones they can’t afford to lose, and the other is a date with Virginia at home. At this point, Clemson probably needs to win out.

I’ll lump these together since none of them really stand out.

K-State picked up a huge win over Oklahoma last weekend, and all nine of their losses have come against the Top 30. Still, they have just one Top 50 win and only four victories against the Top 100. Lots of work left to do for the Wildcats.

UCLA doesn’t lack for quality wins with victories against Kentucky and Arizona at home and Oregon State and Gonzaga on the road. Most of their losses have come against the Top 50, but they’ve also been swept by Washington and lost at Washington State. The Bruins head to Arizona this weekend for a pair of critical games.

Vandy has picked up wins over Florida and Texas A&M within the last couple weeks, but they’ve also lost at Ole Miss in addition to losses against Kentucky and Texas by a combined 33 points.  With seven of their defeats coming at the hands of Top 30 teams, the Commodores are looking like K-State Lite, which means they can ill afford to lose any of the next three winnable games.