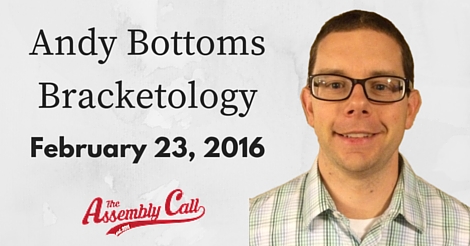 With less than three weeks remaining until Selection Sunday, I’d love to tell you that things are starting to settle in with these projections.

But in a season like this, fluidity is the name of the game.

Sure, the top teams aren’t anywhere near as dominant as they were last season, but in some ways the lack of elite teams has been made up for by the volume of great teams. And what that means is that the Big Dance should be as entertaining and unpredictable as ever, which you won’t find this diehard college hoops fan complaining about.

Kansas and Villanova each won both of their games last week, which made them no-brainers to retain their spots on the top line.

Oklahoma was in danger of falling onto the two line after a loss at Texas Tech on Wednesday, but a double-digit road win at West Virginia helped them retain a one seed.

That left Virginia and Xavier as the top candidates for the final one seed. Had the Cavaliers won at Miami on Monday night, they would have definitely been slotted in as a top seed, but a close loss opened the door for the Musketeers.

Both teams have compelling arguments for a one seed, and I ultimately wouldn’t argue with either choice.

For now, I’m giving the slight nod to Xavier, who is one of just four three-loss teams remaining. Even though the Musketeers are just 1-1 against the Top 25, they do have six victories against the Top 50 and 11 versus the Top 100. It’s also worth noting that Xavier is 8-2 in true road games and boasts an 11-2 road/neutral record, which will certainly earn them some points in the eyes of the committee.

All that being said, a loss at home to Villanova this week would likely end Xavier’s chances at a top seed come Selection Sunday, just in case that Top 5 matchup wasn’t exciting enough already.

As I mentioned last week, a soft bubble would seem to be good news for mid-majors, but unfortunately, I’m not sure there are too many out there with strong enough profiles.

Wichita State could be helped by its recent history and the fact that Fred Van Vleet missed a number of their early season losses, but their two worst RPI losses came while the team was at full strength.

Monmouth (or maybe just its bench) captured the imagination of the country during a strong non-conference performance, but history has been unkind to teams with multiple sub-200 losses.

Out west, Saint Mary’s completed a sweep Gonzaga over the weekend but played a poor non-conference schedule and has nearly 75 percent of its wins over sub-200 squads. San Diego State has looked dominant in a down Mountain West, but the Aztecs have just one win against the Top 90.

Hawaii and Arkansas-Little Rock each have just three losses but need to keep stacking wins. Chattanooga and Valparaiso are both 24-5 as well. The Mocs have a great win over Dayton but four questionable losses, while the Crusaders were swept by Wright State.

Here are my projections through the games from February 22.

I’ve also listed my last four in and first five out along with my reasoning for those selections.

The Wolverines came up just short at Maryland on Sunday, but they’ve now lost four of their last six games. The good news is they don’t have a truly bad loss, but Michigan’s three Top 30 victories are its only wins against the Top 90.

This week features games at home against Northwestern and on the road at Wisconsin, which they need to split at a minimum.

UC is becoming a fixture in this section. The Bearcats beat UConn on Saturday to pull off a season sweep of the Huskies, but they missed out on a chance to sweep Tulsa when they lost in overtime earlier in the week.

As it stands, Cincinnati has a 4-4 mark against the Top 50 as well as non-conference wins over fellow bubblers VCU and George Washington. They’re off until Saturday’s “can’t lose” road game at East Carolina.

Things don’t get any easier with a road trip to Kentucky up next on the schedule.

Like Cincinnati, the Bulldogs continue to find themselves in this position. They took care of business at home against Creighton last week before putting up a decent fight at Villanova over the weekend. Seven of their nine losses have come against Top 40 teams, but they just don’t have a lot of top end wins.

Their lone game this week is at Georgetown before finishing up with home dates against Seton Hall and Marquette, and going 3-0 in that stretch is virtually a must if Butler wants to feel remotely safe.

It was a really close call between Tulsa and Butler for the final spot. Last week’s win over Cincinnati propelled them into the discussion, but the fact remains that they are just 9-9 against the Top 200.

The Golden Hurricane have a chance to pick up another solid win when they host Temple this week before closing with winnable games at Memphis and home against South Florida.

The Bonnies seemed dead in the water after losing at La Salle, but a road victory against Dayton has them back in the conversation for now. Even so, they have just one other Top 50 win and losses to Siena and Duquesne.

At this point, St. Bonaventure probably needs to win out before playing in the A-10 Tournament. Of their last four games, the matchup against Saint Joseph’s is the only one that can really move the needle, while they certainly can’t afford to lose any of the others.

Like St. Bonaventure, GW probably needs to win all of its last four games, which would include victories at home against VCU and on the road versus Davidson.

Saturday’s home loss to Saint Mary’s probably put the nail in the coffin of Gonzaga’s at-large hopes. Outside of a neutral court win over UConn in November, there just isn’t much on the Zags’ profile, and perhaps the best thing about their case is that they don’t have a truly bad loss. Gonzaga is now just 2-7 against the Top 100 and an even 7-7 against Top 200 teams.

The Bulldogs close out the regular season with road games at San Diego and BYU this week, and they can’t afford to lose either one in advance of what will be a critical WCC Tournament.

After splitting games against California and Stanford, the Huskies are right back where they started. They’ve now lost four of their last five contests and have a losing record against the Top 150, including home losses to UC Santa Barbara and Oakland.

The RPI and KenPom numbers aren’t helping either, which makes this weekend’s trip to the Oregon schools a make or break roadtrip for the Huskies.