You are here: Home / Featured / Schedule and Details for Our Live Rewatch Series of Classic IU NCAA Tournament Games 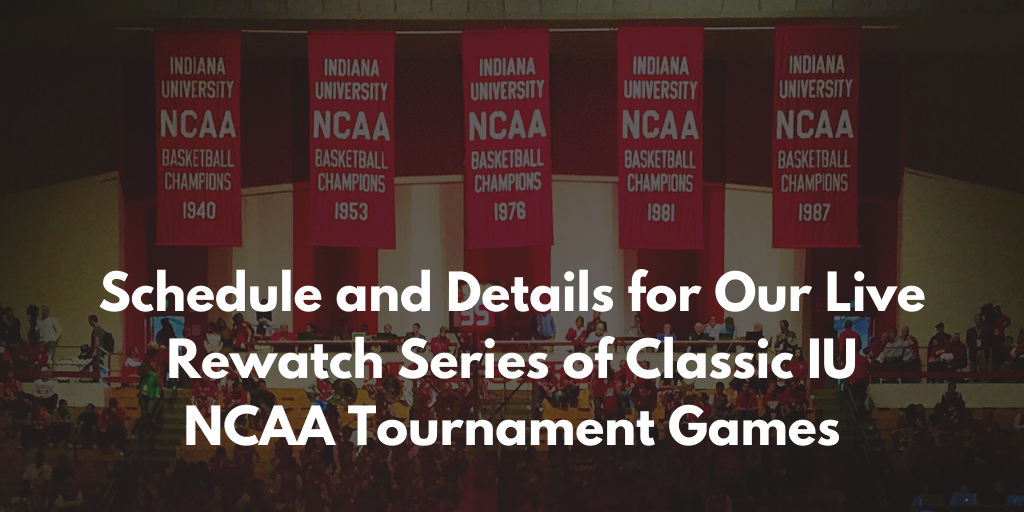 Nothing can replace the real March Madness. We all know that.

March is unequivocally the best month on the sports calendar, and unfortunately this year it has coincided with a global pandemic that has necessitated the cancellation of our favorite sporting event.

So the question has become: what is a desperate Indiana basketball fan to do? Especially with so much extra time on our hands while we take the smart and selfless step of self-quarantining to help “flatten the curve,” reduce the virus’ speed of spread, and hopefully lessen the immediate pressure on our already strained healthcare system.

The answer is: you find opportunities to scratch your basketball itch wherever you can.

One great way to do this is by rewatching old IU games and remembering some of the great teams, players, and moments that our storied program has been a part of.

And we’re excited to do our part to help facilitate these rewatches and make it a communal activity. It’s obviously going to be an isolating few months for all of us, so we should take every opportunity we can to enjoy some fun shared experiences.

This is why, in conjunction with our friends at CrimsonCast and IUArtifacts, we have organized a series of live rewatches and postgame shows for classic NCAA Tournament games featuring our Hoosiers.

How the live rewatch series will work

The way it will work is simple:

It obviously won’t be the same experience as watching the 2019-20 Hoosiers make a deep tournament run, but it’s the closest approximation we can provide.

And we’re fortunate to have so many great tournament moments to choose from!

To take the approximation of a real NCAA Tournament experience as far as possible, we set up the schedule to simulate a real tournament run:

And since we have the massive inconvenience of actually having 60 percent of our NCAA Championship victories available to watch on YouTube, we had to tack on two additional rewatches to fit them all in.

I mean, really: how could you choose just one championship game to rewatch? (Oh to be a Purdue fan, and not have to deal with such scheduling challenges. We could have ended more than a week earlier!)

So there will be eight scheduled rewatches in all, starting this Friday and going through April 12th.

The schedule and games

A few quick thoughts on how we chose the games:

Here is the full schedule, with links to YouTube videos that we’ll use for the rewatches:

If you plan on joining us for these rewatches, please bookmark this page so you’ll have the schedule and YouTube links handy.

We’ll talk to you on Thursday night for Assembly Call Radio and then on Friday night for the beginning of the rewatch series.