You are here: Home / Featured / IU Baseball Poised for Another Strong Season in 2020

Mobile AL.- The names have partially changed, but the goal remains the same.

Despite losing eight players to the Major League Baseball Draft and three others to graduation, the hope of winning baseball in Bloomington has not subsided.

Over the last decade, the Hoosiers have been the Big Ten’s most consistent team — appearing in seven NCAA Tournaments, winning three Big Ten Championships, and making an appearance in the College World Series. They have also finished lower than sixth in the conference only once (a seventh place finish in 2011) and made the Big Ten Tournament 11 times in 12 years.

The program began in 1895 and is the oldest varsity sport on campus, but the recent success contrasts sharply with the previous 100+ years of play when the Hoosiers made one NCAA tournament ever, had just four Big Ten Championships, and went to the Big Ten Tournament only five times.

Former IU catcher Bobby Segal, who played on the team just prior to all the recent success starting, said a broadened recruiting base led to the change in the program.

“With the success that the IU program has had, just recruiting guys from the east coast to the west coast, north to south, it’s pretty obvious guys are coming from all over the country to come play baseball at Indiana University,” Segal told us when interviewed last July 13. “Back when I was playing, Bob Morgan definitely got guys from different parts of the country, but it was a little bit more Midwest recruiting.”

Former pitcher Kyle Hart, who played at Indiana University from 2012-2016 and is now in the Texas Rangers organization, saw the transition from the old Sembower Field to the new Bart Kaufman Field when the program reached new heights. He said the facility change was key.

“I remember practicing on Bart Kaufman when it was still being built, and I was like ‘man this place is really nice,’” Hart told us last June 14. “For us it was something that once I left IU, that’s when I truly realized what we had transitioned into.”

Throughout this successful decade, IU has had three different coaches. Former coaches Tracy Smith and Chris Lemonis moved on to powerhouses Arizona State and Mississippi State following successful tenures as the Hoosier skipper. This led to Hoosier native Jeff Mercer taking the job, and he led the Cream and Crimson to a Big Ten title in his first season in the dugout.

Mercer is now faced with a team that requires reloading after the offseason personnel loseses, but he is confident the players he does have this season will be successful.

“I love the club,” Mercer said. “The thing I like the most is the makeup, the mentality, the toughness, the camaraderie. I feel like we have a lot of the guys pulling on the same side of the rope, trying to do the same thing together, and have success as a team. When you have a group that is talented, new, and young certainly, but has great makeup, we have a chance to get out to compete and win.”

Despite the player turnover, Baseball America projects the Hoosiers to finish fourth in the Big Ten and make the NCAA tournament yet again. This is mainly due to the return of sluggers Cole Barr, Elijah Dunham, and Grant Richardson as well as starters Drew Ashley and Jeremy Houston. Barr, Dunham and Richardson combined to hit 34 of an IU single-season record 95 home runs last year, and they will anchor the lineup this year.

Dunham, who led the team with a .310 average last year and is off to a blazing .476 average this year, echoed Mercer and said the team has more than enough to have another special season.

The pitching staff lost its entire weekend rotation heading into this season as the trio of Pauly Milto, Tanner Gordon, and Andrew Saalfrank all were drafted and signed major league contracts. This will require the previous season’s weekday starters Tommy Sommer and Gabe Bierman to assume prominent roles as the leaders of the staff. Both were successful with sub-four earned run averages at the back of the rotation.

Early returns have been promising, especially for Bierman, who has a 2.31 ERA in two starts so far. Also, little-used Braydon Tucker is now featured prominently in the rotation and shows great potential with a sub-one era in his two starts.

Bierman said the adjustment to his new role has required additional commitment.

“It’s definitely a lot more work,” Bierman said. “More pitches of course. Coming in for three innings and just shutting down guys is totally different than coming in for a start. It just matters how you go along with the game. You get in a groove and it’s a lot easier to fool hitters.”

Also figuring to feature prominently in Bierman’s old role this year is McCade Brown, who struggled mightily last year in limited action. However, he has seen dramatic improvement this season closing out two wins this year. Mercer said he had seen an obvious growth in Brown.

“McCade’s a different guy top to bottom,” he said. “He’s worked real hard on his body. He is such a big man. That takes time for young guys to be able to control themselves when they are that big. We have great confidence in him. He’s been one of our more dominant pitchers throughout the fall and the early winter. I have 100% confidence and he his going to do a great job.”

So far, the returns have been extremely promising for the young Hoosiers, who sit at 4-2 after six games. This includes a win at a highly ranked LSU team on the road the first weekend of the season. The second weekend was successful as well, with a win against a ranked South Alabama team in their home stadium as part of a tournament in Mobile, Alabama. The team also has victories over Tennessee Martin and Sienna in this tournament.

The schedule will continue to be extremely tough, as they will face highly-ranked Coastal Carolina, Ole Miss, and Louisville as well as San Diego, Kentucky, and an Illinois State team that beat the Hoosiers in the NCAA tournament last year. Big Ten play also features series against Michigan, who nearly became the first Big Ten team to win a national championship in 60 years, as well as Ohio State and Nebraska, who figure to be prominent players in the conference.

Mercer said as long as the Hoosiers believe in themselves success will come this season.

“We just have to go out and trust ourselves and be able to play with a ton of confidence,” he said. 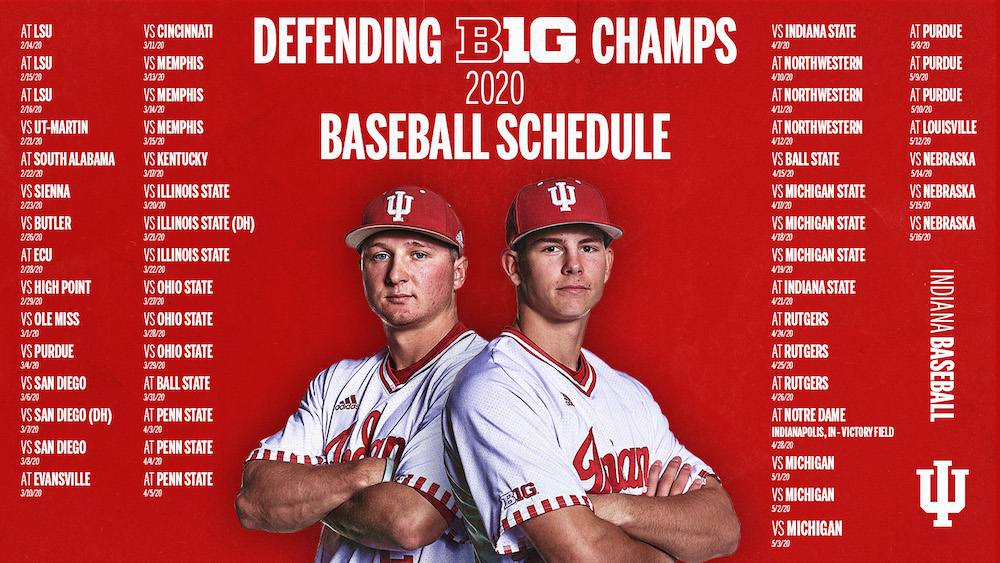