You are here: Home / IU Artifacts / A ‘Short’ History of Indiana Basketball 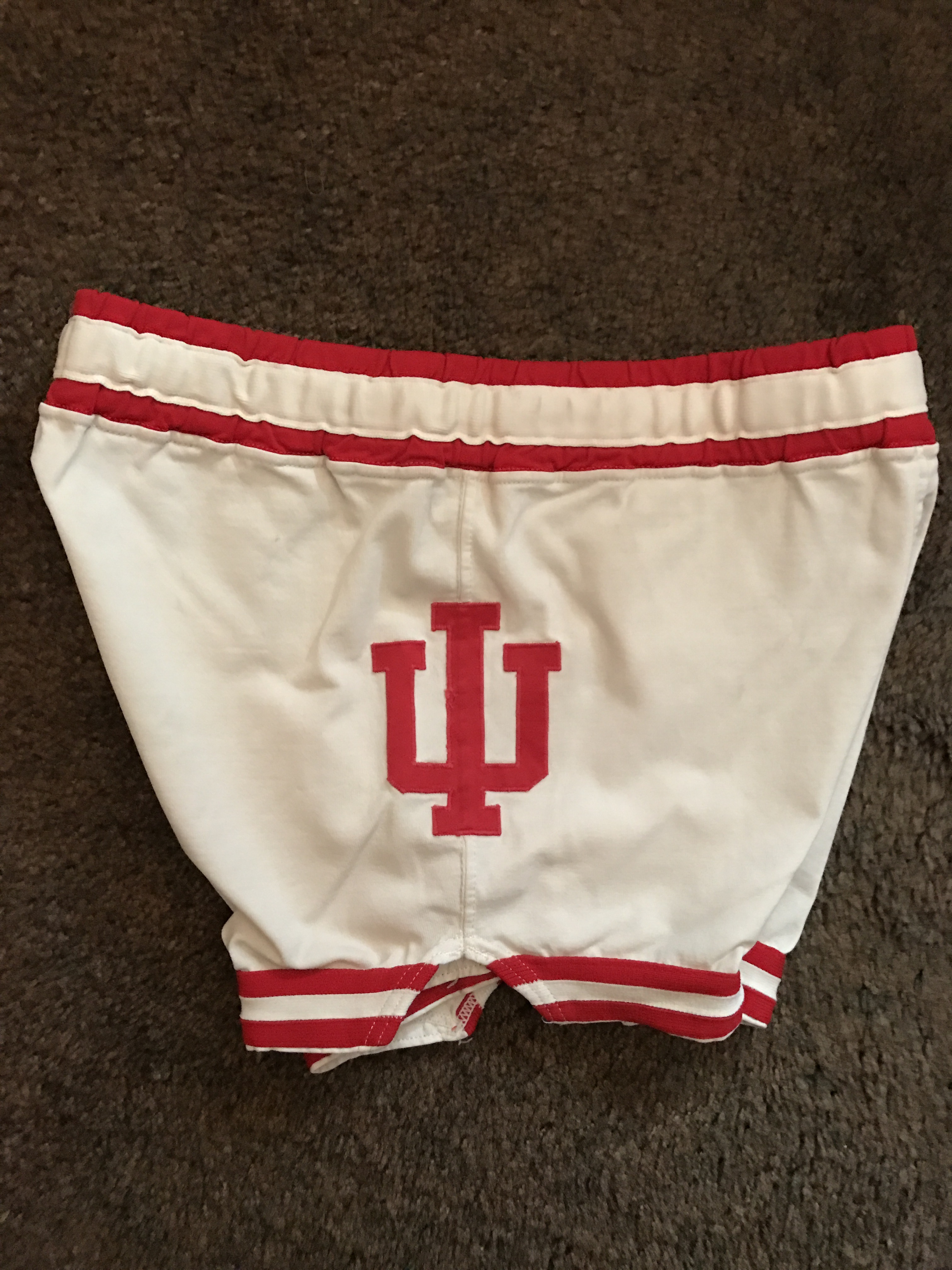 As you may recall, a while back I put together a guide to collecting Indiana University basketball game-used jerseys.

In this piece, I’m going to talk about the other half of the gameday uniform: shorts.

All in all, game-used equipment is probably my biggest IU collecting passion — researching the history of when the item was worn and by whom, as well as the changes in style, color, and design is very interesting.

In general, coaching changes at IU have signaled changes in the design of the uniforms. This is especially the case with coaches Branch McCracken, Lou Watson, and Bob Knight.

Branch McCracken arrived in Bloomington to coach his alma mater in the fall of 1938.

Indiana at that time wore uniforms made of wool by O’Shea Knitting Mills of Chicago, Illinois. What is unique about McCracken’s first season at IU is that it appears to be the first time that numbers appear on the front of IU jerseys.

Belts would be worn to keep shorts secure, and to aid in keeping jerseys from becoming untucked. This would be common practice from the very early days of college basketball until elastic waistbands would replace belts in the late 1960s.

It appears that the Indiana University basketball team would switch to MacGregor as their uniform manufacturer sometime in either the late 1940s or very early 1950s. This decision, however, was most likely made for all IU sports. Nevertheless, MacGregor uniforms would be worn by Indiana through the 1965-66 season.

Another change visible in the 1950s with the Hoosiers was synthetic materials being used in place of wool. This was a common transition by sporting equipment manufacturers as it was clear that wool was not a favorite of players day in and day out.

Satin shorts (as seen below) would give the Hurryin’ Hoosiers a shiny appearance on the court.

Lou Watson, who played at Indiana for Branch McCracken, would take over for his coach following the ’64-65 season.

During his first season at the helm (1965-66), Watson’s players would use the MacGregor uniforms from the previous season. This was common practice for most universities and colleges at that time as a money-saving initiative.

However, IU would change manufacturers for Watson’s second season, 1966-67. Rawlings would introduce elastic waistbands to the Hoosiers, a welcome addition to replace belt usage in uniforms.

While the “INDIANA” style displayed in the jersey would remain consistent from 1966-1970, the shorts did go through some modifications. For the very first time, beginning with the 1969-70 season, an “I” would be placed on the shorts.

Bob Knight’s arrival on the IU campus in the fall of 1971 meant major changes in playing style, but uniform changes would be in the works as well, including some tweaking of the school colors.

The Hoosiers of ’71-72 would wear the uniforms of Lou Watson’s final team from the year prior. Those uniforms themselves were unique, as the colors appear more cream and maroon than cream and crimson. Nonetheless, they were utilized.

Beginning in the fall of 1972, the Hoosiers would continue wearing Rawlings uniforms (a continuation from 1966), but with some major changes. A pitchfork logo design would be present on the shorts, as well as a new style of “INDIANA” on the front of the jerseys.

However, the most noticeable change was the fact that the jersey colors were red and white, not the traditional cream and crimson. This color scheme, with some slight variations, would be in place through Knight’s entire IU career, as well as the first two season’s for Knight’s replacement, Mike Davis (2000-2002).

From from the 1976-77 season through 2000, Indiana would bounce around between six different uniform manufacturers: Medalist San-Knit, Champion, Asics, Starter, Ripon, and Logo-Athletic. Nike would come on board during the 2000-01 season.

Carrying on the red and white color scheme introduced by Bob Knight, the new short style would be featured in Indiana’s upset win over #1 ranked Michigan State on January 1st, 2001. Although this is one of my all-time favorite IU uniform designs, the color scheme would be short-lived.

In January of 2002, in the midst of what would become Indiana’s run all the way to the 2002 NCAA Championship game, then-IU Athletic Director, Michael McNeely, announced that Indiana would be restoring its school colors to cream and crimson for all sports programs, as well as an update to the school’s logo, which would then be used as a universal logo for all men’s and women’s sports teams. This change is still reflected today for all of Indiana’s 24 sports.

Part of Indiana’s brand during the Bob Knight years was the enduring short shorts — a symbol of Indiana’s old school mentality, even as the Fab Five’s influence led to longer shorts across the country.

After Knight’s dismissal, the Hoosiers gradually transitioned to wearing a more modern style of shorts. A few recent players, however, most famously OG Anunoby, preferred shorter shorts — harkening back to some of these classic styles worn by IU teams in decades past.