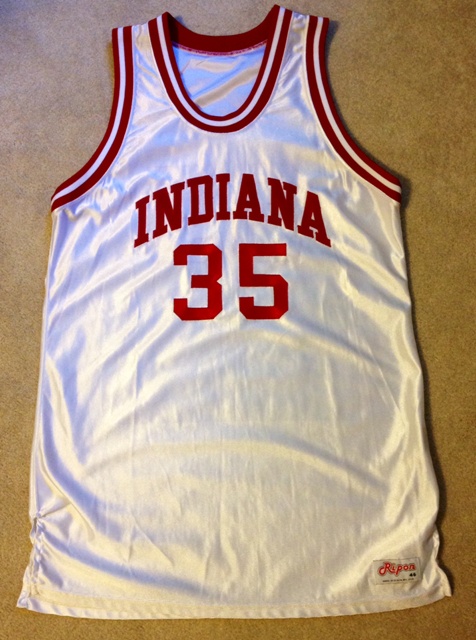 Collector’s note: The 2000-01 season would be not only a season of change at the head coaching position, but also one with uniforms.

For a second-straight season, Indiana would begin the season wearing Ripon Athletics uniforms. However, Indiana was in the process of an apparel deal with Nike, which would impact the IU basketball team as well. Halfway through the 2001 Big Ten season, Indiana would change from the Ripon uniforms to a mesh style Nike uniform.

Jerseys from the early 2000s do not seem to come up for sale often, even though many were liquidated during the IU Athletics apparel sale in the winter of 2001.

A cloud of uncertainty fell on the state of the Indiana University basketball program following the dismissal of head coach Bob Knight on September 10, 2000.

The winningest coach in IU basketball history, the man who had led the Hoosiers to three NCAA titles, as well as 11 Big Ten titles, was gone. A decision on where the program would go from there hung in the balance, including the status of the returning players.

Mike Davis, who Knight had brought to Bloomington as an assistant coach in 1997, would be named the interim head Indiana coach on September 12th, his first head coaching job. Much to the relief of Indiana fans, many of whom were still dealing with the loss of “The General,” all returning players on scholarship had committed to playing for Davis.

Indiana would graduate five seniors from its 1999-2000 squad, including the starting backcourt duo of A.J. Guyton and Michael Lewis. Guyton, who averaged a team-leading 19.7 ppg, had been named an All-American and Big Ten Player of the Year in 2000. He left Indiana 4th on the career scoring list. Lewis graduated with the then-record for career assists.

Indiana also had one of the best incoming freshmen in the country in Jared Jeffries, a native of Bloomington. However, a Hoosier team lacking seniors would bring a certain level of uncertainty, on top of many questions surrounding first time head coach Mike Davis.

Indiana would face Pepperdine in the season opener. The Waves had knocked the Hoosiers out of the NCAA Tournament the previous season with a 77-57 victory. Haston, who would lead the Hoosiers in scoring during the 2000-01 season, opened his junior season with a strong 28-point, 14-rebound performance.

A victory over South Alabama on November 17th would place the Hoosiers 2-0 to start the season.

Indiana bounced backed back with a victory in Assembly Hall against Southern Illinois, then went into South Bend and took down the #10-ranked Notre Dame Fighting Irish, 86-78. Sophomore Tom Coverdale, who had played a total of 41 minutes his freshman season, led Indiana with 30 points in the victory.

Indiana stood 7-3 with three additional victories against the likes of Western Michigan, Ball State, and Charlotte. The win streak would come to a halt with a poor performance against Missouri at home, resulting in a 68-63 loss. Coach Mike Davis did not pull any punches in describing his team’s play telling the Bloomington Herald Times: “I’m really embarrassed by the way we played. No effort.”

Those who may have questioned Davis’ coaching ability would see some concern following the conclusion of the Indiana-Kentucky game on December 22nd in Louisville.

Despite leading the Wildcats at halftime, Indiana could not contain Kentucky in the second half, including 11-straight points to start the second half. The Wildcats would shoot a blistering 69% from the field en route to an 88-74 victory over Indiana.

During the post-game interviews, Davis laid it out on the table: “Maybe the guy they bring here next year will get them to play hard. I can’t do it. I’m not the guard,” Davis said at the end of his press conference. “I can’t coach this team. What buttons do I push. No way they’ll keep me for this job.”

Conference play begins … and the Hoosiers knock off #1

Indiana entered Big Ten Conference play with a 9-5 record. Things would not get off to a positive start for the Hoosiers after a loss to the Wisconsin Badgers in Madison, 49-46. Haston led the Hoosiers with 19 points and 10 rebounds.

The reigning NCAA Champion Michigan State Spartans would come to Bloomington on January 7th as the #1 team in the country, standing 12-0 overall. Michigan State was also near the top of every major offensive statistic in the conference. Needless to say, Indiana would have its hands full for the nationally televised contest.

The first half brought a back-and-forth battle as neither team was able to extend a stable lead, and by half time, Indiana would cling to a one point lead, 28-27.

Michigan State was able to extend leads to six points twice during the second half, the latter being 46-40 with 12 minutes remaining in the game. Indiana would follow with a nine-point run to take a three-point lead, 49-46.

The game went back and forth again until Zach Randolph was fouled with 11 seconds remaining, going 1-2 at the line to give MSU a two-point lead, 58-56.

Bringing the ball to halfcourt, Indiana would call time out with eight seconds remaining to draw up a play. The designed play was intended for sophomore guard, Kyle Hornsby, who was a three-point threat.  However, Hornsby received the ball from guard Tom Coverdale, briefly looked for his shot, and passed the ball to the right side of the three-point line where Haston elevated a shot over Randolph that found the bottom of the next as time expired.

Indiana had defeated the #1 team in the country, 59-58. This would also end Michigan State’s 23-game winning streak, the longest in the country at that time.

For a season full of change, where ups and downs had occurred, it was an uplifting moment. Kirk Haston would finish with a team-high 27 points. Probably the most impressive stat for the Hoosiers that day was forcing 19 Spartan turnovers, their highest of the season.

To many in attendance, it was the best game they had ever seen in Assembly Hall.

Indiana came down to earth following the upset of #1 Michigan State with a loss at Michigan, 70-64. A victory at home vs Penn State would follow on January 17th, but once again, Indiana would falter on the road against Minnesota in overtime, 78-74. What made that loss especially crushing for IU was losing a 13-point lead with four minutes remaining in regulation.

The Hoosiers would be able to rebound at home against in-state rival Purdue 66-55 behind a 24-point, 15-rebound performance from Haston. Following another loss on the road at Iowa (former Indiana star Luke Recker would score 27 points against his old team), Indiana was able to reel off four straight victories against the likes of Ohio State, Penn State, Michigan, and Northwestern. The Hoosiers now stood 16-9 overall with five games remaining in the regular season.

Over the course of those final five games, the Hoosiers went 3-2 to finish the regular season at 19-11 entering the Big Ten Tournament. Off the court, rumors were swirling as to whether Mike Davis would be retained as head coach.

The Hoosiers would take care of business in their first two matchups in the Big Ten Tournament defeating Wisconsin and Illinois, to face Iowa in the championship game. Indiana would fall to Iowa 63-61 behind a strong performance from Dugger, Indiana native, Brody Boyd.

There would be no redemption for the Hoosier group that had suffered a 20-point loss the previous March to Pepperdine. Additionally, the Kent State game would be the last for star center, Kirk Haston, who would declare for the NBA Draft following his junior season.

Haston would be named a 2001 All-American, as well as First Team All-Big Ten. Jared Jeffries, the hometown star, had been named Big Ten Freshman of the Year. Jeffries would end his freshman season averaging 13.8 ppg and 7 rpg.

Any question about Mike Davis’s future in Bloomington was answered on March 22, 2001 as the interim tag was lifted, and Davis was officially named the head coach of the Indiana Hoosiers. With Davis cementing his place in Bloomington, Hoosier Nation could move forward from the Knight era.

Those seeking the glory days of success in the NCAA Tournament would not need to wait long.