You are here: Home / IU Artifacts / 1993 Indiana versus Northwestern Program and Ticket 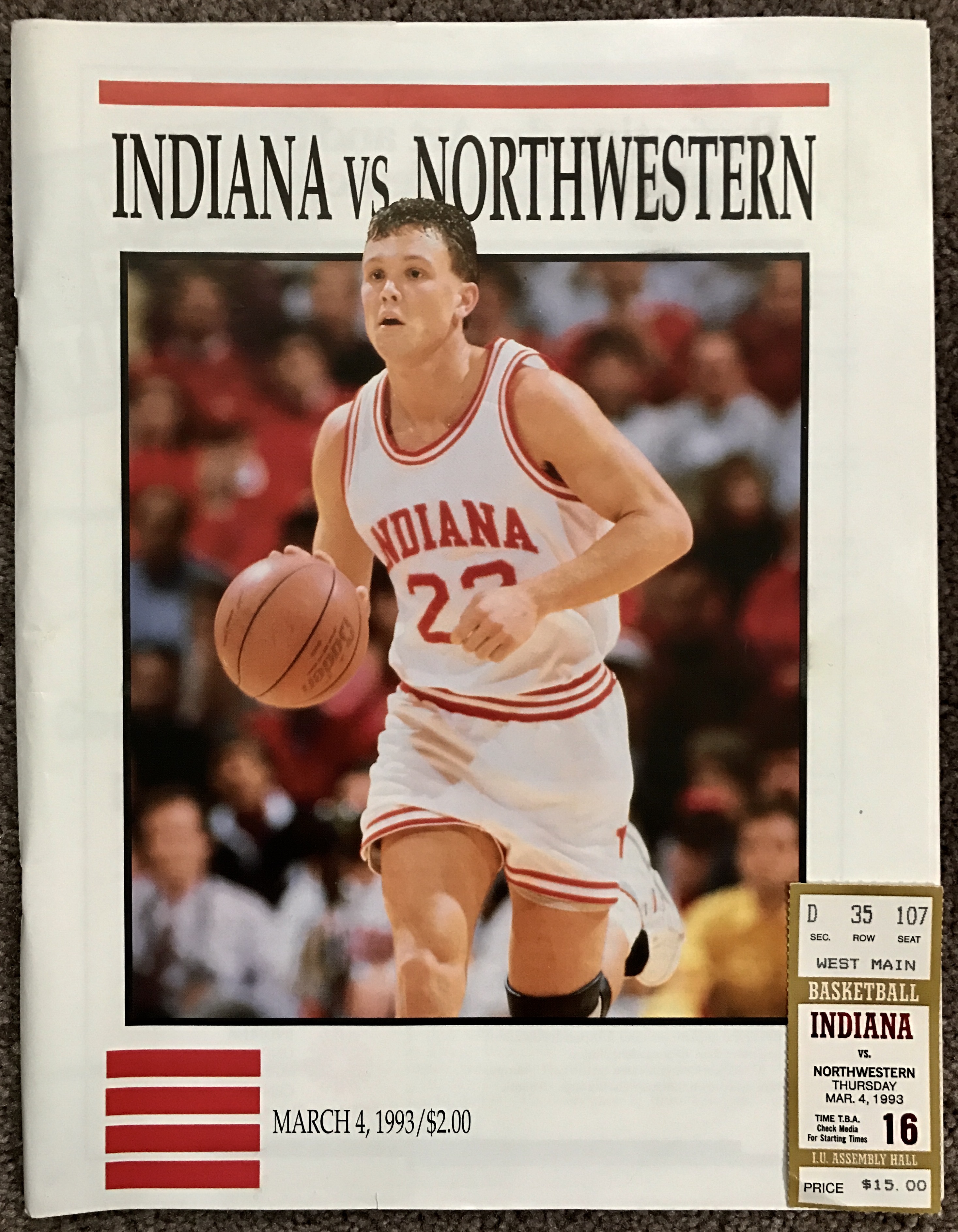 Collector’s note:  I’ve always been the kind of IU collector that seeks out tickets and programs from significant games: single-game record performances, “firsts”, facility dedications, etc. Surprisingly, it took me a while to pair up the program and the ticket stub for Calbert Cheaney’s remarkable scoring achievement, detailed below.

I was only ten at the time and did not attend the game. Every once and awhile, a ticket from the 92-93 season will pop up on Ebay, but I’ve only seen the 1993 Northwestern at Indiana game ticket twice in the last ten years. I don’t necessarily consider it a rare ticket, just one that I’m sure so many fans held on to considering the significance of the game itself.

Heightened expectations in 1993 after disappointment of 1992

I can remember the disappointment of the ending to the 1991-92 season very well — the highly questionable calls by referee Ted Valentine, and Todd Leary’s heroic effort to try to keep us in the game in the closing stretch versus Duke. Additionally, one of my favorite players that season, senior Eric Anderson, would never again don an Indiana jersey.

However, Indiana fans, including myself, were hoping the 1992-93 season would be one of redemption.

With the leadership of four seniors — Calbert Cheaney, Matt Nover, Greg Graham, and Chris Reynolds — as well juniors Pat Graham and Damon Bailey, and sophomore Alan Henderson, a return to the Final Four and beyond would hopefully be in the cards.

Another noteworthy accomplishment that was possible when the season began, though certainly under the radar, was the record of all-time leading scorer in Big Ten basketball history. Cheaney entered the 92-93 season with a realistic chance of eclipsing Michigan’s Glen Rice’s record of 2,442 career points, as well as the all-time Indiana scoring record held by Steve Alford. In his first three seasons at IU, Cheaney had averaged 17.1, 21.6, and 17.6 ppg respectively.

Indiana entered the season nationally ranked at #4. In the first 5 games, IU faced five teams ranked in the pre-season top-25. After a fast 4-0 start, the Hoosiers fell to 3rd-ranked Kansas at the Hoosier Dome on December 5th, by a score of 74-69. The only other blemish to IU’s pre-conference record was a 81-78 loss to Kentucky at Freedom Hall in Louisville.  Kansas would go on to be a 2-seed in the 1993 NCAA Tournament, while Kentucky would be the top seed in the Southeast Region.

In fact, the Hoosiers would won their first 13 conference games for the first time since the 1975-76 undefeated season. One of the biggest victories during that stretch was a 93-92 victory over the Michigan “Fab Five” (#4 nationally), the eventual NCAA Tournament runner-up.

The fatal blow to the 92-93 season, the one that would prevent IU from redeeming itself after its loss to Duke in the 1992 Final Four, came the day before IU was to host Purdue on February 21st.

Alan Henderson, Indiana’s most talented inside presence, tore an ACL in practice, essentially ending his season. Once word got out, many IU fans thought here we go again, referencing the Scott May broken arm in 1975 that most fans believe prevented IU from winning the national title that season. The Hoosiers rallied together in spite of Henderson’s absence to defeat #14 Purdue, 93-78.

IU was 14-1 in conference play (their lone conference loss at Ohio State on 2/23) prior to hosting Northwestern on March 4th. And IU fans knew it would be a special night in Bloomington.

Entering the game, Calbert Cheaney needed only six points to pass fellow Hoosier Steve Alford as Indiana’s all-time career scoring leader, and he was only 10 points away from surpassing former Michigan star Glen Rice as the all-time leader scorer in Big Ten history.

Cheaney would not disappoint in front of the packed home crowd, achieving both records early en route to a 35-point performance in the 98-69 victory over the Wildcats.

Bob Knight, never one to highlight individual accomplishment over team achievement, did something few would have thought possible. He stopped the game to honor Cheaney and his record. It was a glimpse into the profound respect Knight had for Cheaney as a player, a teammate, and a person.

A 17-1 conference record would give Indiana its 19th conference title, and the Hoosiers would be the #1 team in the country entering the NCAA Tournament. However, the knee injury to Alan Henderson proved too much for the Hoosiers. Without front-court depth, the Hoosiers weren’t able to return to the Final Four, falling to Kansas, the team that had bested them in the preseason, 83-77.

Upon reflection, the 1992-93 season is one of “what-ifs.” However, the individual achievements of Calbert Cheaney cannot be overlooked. We may never see another Hoosier eclipse his career scoring marks, let alone another Big Ten conference player.