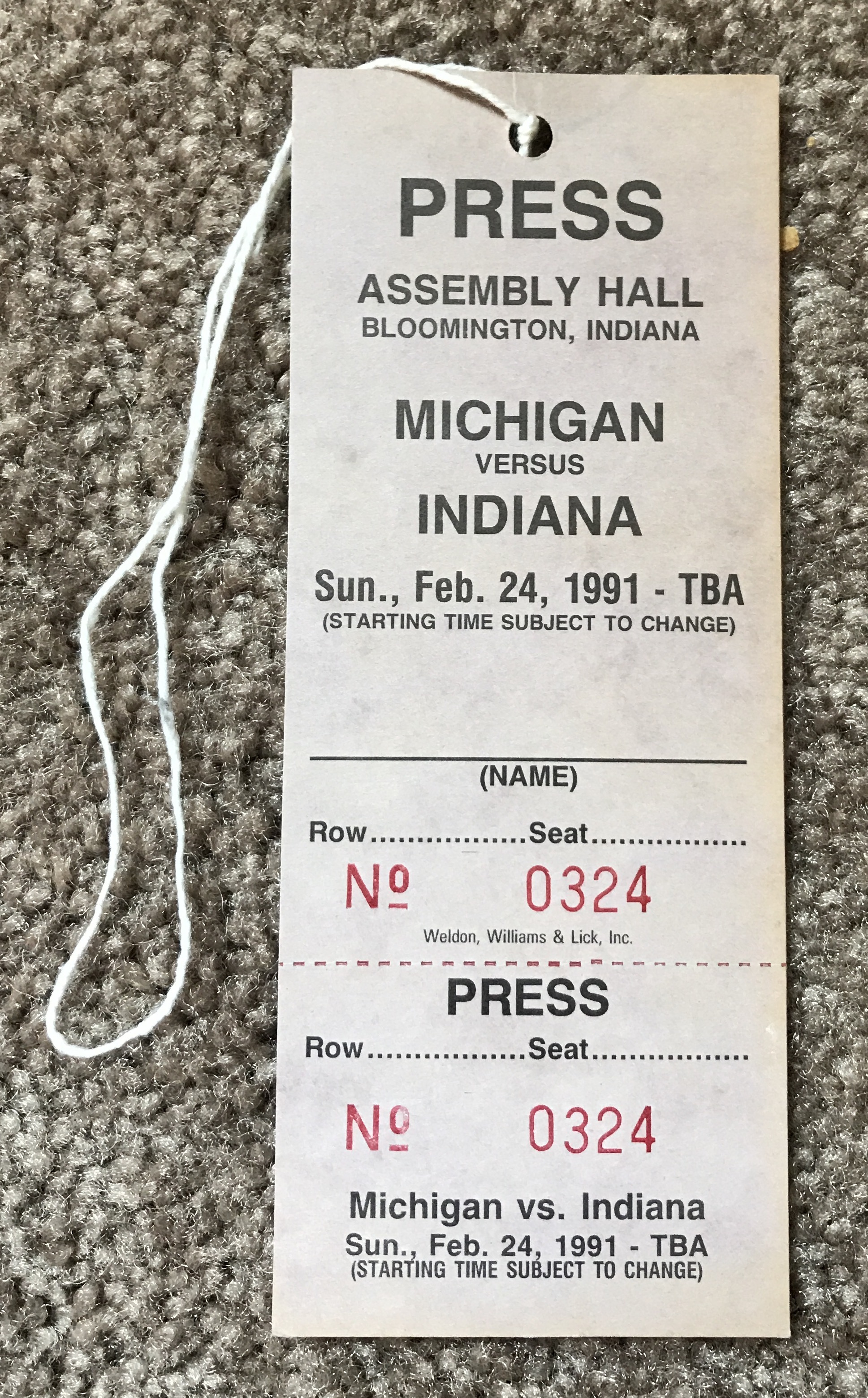 Collector’s note: Press passes are a unique piece of memorabilia, as many did not survive. Most often, passes were tossed after each game as a member of the media would receive a new pass each game. More often than not, those that did survive tend to be more from football games than basketball games. IU basketball press passes especially from the 1970’s and prior are rare and hard to come by.

With the departure of Jay Edwards (declaring for the NBA Draft), who was Indiana’s leading scorer at 20 ppg and a First Team All-American selection, the 1989-90 Hoosiers struggled to adjust. It was one of the youngest teams in the Bob Knight era.

Fortunately, a strong crop of sophomores and returning veterans would be able to bounce back.

The freshman class of 1989-90 had been dubbed the “Magnificent Seven,” and many recruiting gurus considered it possibly the greatest recruiting class of all time. The highest rated player of the class, Lawrence Funderburke, had decided to transfer from Indiana early in the ’89-90 season, and ended up at Big Ten rival Ohio State. However, this still left Indiana with loads of young sophomore talent going into the fall of 1990: Calbert Cheaney, Greg Graham, Chris Reynolds, Chris Lawson, Pat Graham, as well as redshirt sophomore Matt Nover.

Indiana’s lone senior for the 1990-91 season would be Marion, Indiana native Lyndon Jones, who had arrived in Bloomington as co-Indiana Mr. Basketball with Edwards, his high school teammate. Jones had never been able to truly mimic his playing performance from high school during his career at Indiana, but Coach Bob Knight depended on his senior point guard to help lead the way with this young but talented team.

In 1990-91, the Hoosiers were drastically improved in all facets of the game from the previous season. Indiana went 12-1 in the pre-conference season, their lone loss to Syracuse, 77-74, on November 25th.

What was evident very quickly during the early part of the ’90-91 campaign was that Calbert Cheaney had become Indiana’s dominant scorer. The Evansville, Indiana native had led the Hoosiers in scoring his freshman season at 17.1 ppg, but returned even more determined to be the major scoring threat in the Indiana offense.

IU began Big Ten Conference play on January 2, 1991, blowing out Illinois at home, 109-74, led by a monster 30-point performance by Cheaney. Junior Eric Anderson would add a double-double (20 points, 10 rebounds). Victories over Northwestern, Purdue, and Iowa would follow as Indiana got off to a 4-0 start.

Indiana would then host the 4th-ranked Ohio State Buckeyes, who Coach Bob Knight considered the top team in the conference. Ohio State ran the Hoosiers off the floor, building a 19-point lead in the first half. A 22-point OSU lead in the second half was eventually chipped away to two points, before the Buckeyes dealt Indiana their first conference loss, 93-85.

Six IU straight victories would follow, include three on the road against Michigan, Minnesota, and Northwestern. Indiana would win these six games by an average margin of victory of 16 points.

A trip to Columbus for a rematch against the Buckeyes was up next on February 17th.

The nationally televised game did not disappoint, as a 2-OT thriller ensued, with Ohio State edging Indiana 97-95. Damon Bailey’s 32-point performance, including 12 in the overtime periods, led the way for Indiana. Many believed that OSU sweeping the Hoosiers would assure them the #1 Midwest Regional seed in the upcoming NCAA Tournament.

A buzzer-beater tip in by Iowa’s James Moses would deal Indiana their 2nd straight Big Ten loss at home, 80-79.  Senior Lyndon Jones, who had found himself coming off the bench during conference play in the shadow of starting point guard Jamal Meeks, had one of his greatest IU performances with 21 points.

The Michigan Wolverines would come to Bloomington on February 24th — the game for which the aforementioned press pass was used.

Indiana desperately needed to bounce back from two straight conference losses to have any shot of clinching a share of the Big Ten title with Ohio State. It didn’t take long for the Hoosiers to take the upper hand in the contest as Michigan would commit six turnovers in their first seven possessions.

Benefiting from great bench play, which would contribute 48 points, IU would blow out the Wolverines, 112-79. Calbert Cheaney would lead the way for Indiana with 30 points, while Damon Bailey, who had gone scoreless against Iowa (the first time he had ever gone scoreless in any basketball game in his life), added 16 points and 5 assists.

Three of the final four games of the season would take place on the road, as Indiana would travel to Michigan State and Wisconsin, return to Assembly Hall against Minnesota, and finally to Champaign for the season finale against Illinois. When asked what the chances were of catching conference leader Ohio State, Coach Bob Knight stated “they’re like ground zero.”

Nonetheless, Indiana took care of business on their end, sweeping four victories in their final four games to finish 15-3 in conference play. Iowa and arch-rival Purdue would greatly aid in Indiana’s conference title hopes, as Ohio State would drop its final two conference games to fall to 15-3 overall, sharing the Big Ten title with Indiana.

As expected, Ohio State was still awarded the #1 seed in the NCAA Tournament Midwest Regional, while Indiana would be the #2 seed in the Southeast Regional, getting to play their opening round games only two hours away from Bloomington at Freedom Hall in Louisville.

While handling business in their first two games, with victories over Coastal Carolina and Florida State, IU would now face the #3 seed Kansas Jayhawks. With sharpshooting from the three-point line, Kansas would jump out to a blistering 23-4 lead, and really never look back. Indiana had an unprecedented nine turnovers in the first half, combined with cold shooting, which led to Kansas enlarging their lead at half, 49-27.

Momentum would not turn in favor of the Hoosiers in the second half, as, despite opportunities to chip away at the Jayhawk lead, Indiana would fall to the eventual NCAA runner-up, 83-65. The common theme in comments from Bob Knight was the level of preparation by Kansas coming into this game: “They came out and really played like you’d want a team to play.”

Post-season honors would be plentiful for the Hoosiers as Calbert Cheaney would earn All-American honors, as well as earning First Team All-Big Ten honors with teammate Eric Anderson. Damon Bailey would be named Big Ten Freshman of the Year.

With disappoint to end the season came determination to take it to the next level for the 1991-92 season.

Which is exactly what the Hoosiers would do, winning the Big Ten and making the Final Four.