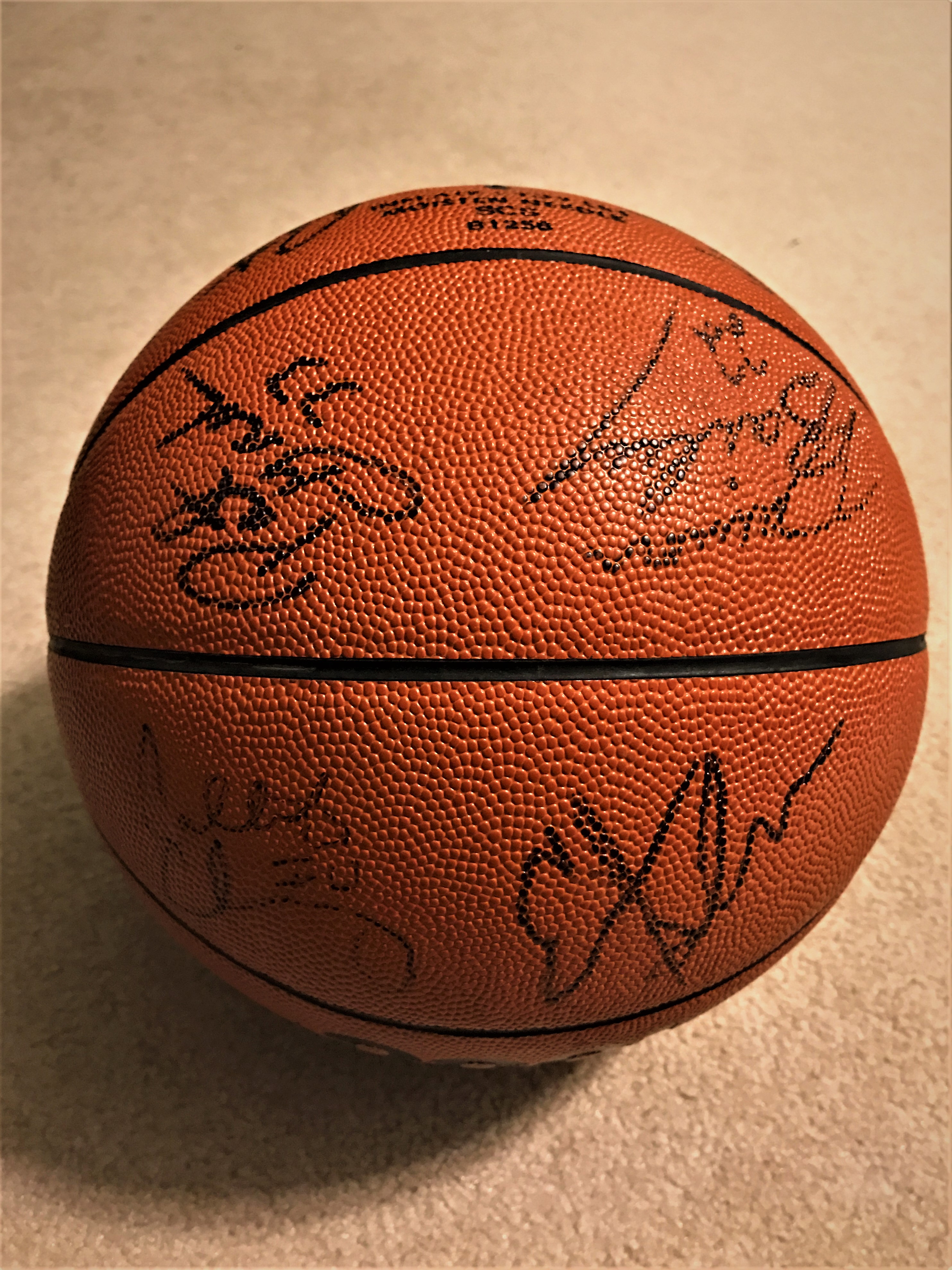 Collector’s Note: The early 1990s provided some very exciting years for Indiana University basketball fans, so memorabilia from that era is desirable. Given the success of the 1991-92 and 1992-93 seasons especially, signed items are out there. However, team-signed basketballs from the early 1990s don’t always surface for sale, and when they do, they usually command strong prices. Ticket stubs from that era have also seen a surge in demand in recent years, but still remain somewhat easy to find. Basketball tickets, in general, however, have always been less desirable for collectors due to the sheer number of games per season versus that of football games.

Following Indiana’s somewhat surprising Big Ten Championship in 1989, the Hoosiers were hoping for continued success with the arrival of what many considered to be head coach Bob Knight’s greatest recruiting class in his time at Indiana. In fact, the incoming freshmen for the 1989-90 season, dubbed the “Magnificent Seven,” were tabbed by some as perhaps the greatest all-time recruiting class in college basketball history — Lawrence Funderburke, Calbert Cheaney, Greg Graham, Pat Graham (no relation to Greg Graham), Chris Reynolds, Chris Lawson, and Todd Leary.

Seven incoming freshmen would need to lean on upperclassmen for leadership and guidance. This, however, would be only a small part of why the 1989-90 season would be one of struggles. The 1989 Big Ten Championship team would graduate six seniors. However, the most important piece of the team would not return for his junior season in Bloomington. Jay Edwards, who led the team in scoring with 20 ppg and was named a first-team All-American following the 1989 season, decided to forgo his final two seasons of college eligibility for the NBA.

Even with the talented group of freshmen, Indiana would struggle to a 18-11 record during the 1989-90 season (8-10 in conference play). To make matters worse, Lawrence Funderburke, the most heralded of the talented recruiting class, would quit the team and drop out of IU only six games into the season.

Hoosiers fans, needless to say, were hoping for a rebound when the 1990-91 season approached.

Calbert Cheaney, who led the Hoosiers his freshman season in scoring at 17.1 ppg, looked primed for another strong season. However, all the attention entering the season would be on perhaps the most well-known player in Indiana high school basketball history.

Damon Bailey, who had led Bedford North Lawrence High School to a state title in 1990 in front of a crowd of 41,000 people at the former “Hoosier Dome”, and who left BNL as the all-time career scoring leader in Indiana high school basketball history, would arrive in Bloomington with perhaps the highest expectations ever for a Indiana University freshman.

Another key piece to success for the ’90-91 season would be Chicago-native, junior Eric Anderson. Anderson, a 6’9″ power forward with a solid 15-foot jump shot, had been second on the team the previous season in scoring with 16.3 ppg, as well as leading the Hoosiers with 7 rpg.

Coach Bob Knight also had high hopes for senior point guard Lyndon Jones. The co-Indiana Mr. Basketball with former Marion High School and Indiana teammate, Jay Edwards, Jones’ career at Indiana had never blossomed the way Knight had hoped. From a statistic standpoint, the senior season would be the worst for Lyndon Jones, as Jamal Meeks, a sophomore from Freeport, IL, surged to take the reigns at point guard in the pre-conference season.

Coach Knight knew one thing would be different for his returning players entering the 1990-91 season: their playing condition. Knight had insisted on an accelerated weight and cardiovascular conditioning program under the guidance of team doctor Larry Rink after the conclusion of the 1989-90 season. Knight stated that one weakness from the previous season was the fact that the heralded freshmen class had not taken part in IU’s conditioning program prior to the start of the season, and that it was clear halfway through Big Ten play that they were running out of gas.

After handling the Soviet Union National Team and Athletes in Action in exhibition play, Indiana would take care of business against Northeastern with a 100-78 victory in the first round of the Maui Invitational. In semifinal play, IU would narrowly escape with a victory over Santa Clara, 73-69, in a game where Indiana had an 11-point lead with three minutes to go. The Hoosiers, however, would suffer their first loss of the season in the championship game against Syracuse, falling 77-74. In fact, since Indiana’s victory in the 1987 NCAA Championship against Syracuse, Indiana was now 0-2 versus the Orange.

Returning to the mainland, Indiana would play its next three games either away or on a neutral site. With victories at Notre Dame and at Vanderbilt, and a 20-point thrashing of Louisville in Indianapolis, the Hoosiers would finally return to the friendly confines of Assembly Hall (now 100% smoke-free for the first time ever) for their home opener against Niagara in the IU Classic. IU would take care of business against Niagara, 101-64, as well as San Diego and Western Michigan over the next two games.

The Hoosiers now stood 7-1 with a major test awaiting with Kentucky coming to town on December 18th.

The Indiana-Kentucky series stood at 12-12 going into the 1990 contest, and it was clear that it would be a game that would go down to the wire as Indiana only led by three at half, 37-34. While Indiana led, Coach Knight was less than pleased with his team’s play, as he called out junior Eric Anderson and sophomore Calbert Cheaney for their lazy play on the floor warning them “they had two minutes to get going in the second half or they were going to be on the bench.” Cheaney responded in strong fashion with 19 second-half points (23 total for the game) as Indiana battled to an 87-84 victory in Bloomington. Freshman Damon Bailey added 16 points. (Cheaney, over his last five games, had now shot an astounding 63% from the floor.)

The Hoosiers would handle Iowa State, Marshall, and Ohio University to win their final three games prior to conference play.

Indiana had now won ten straight since losing in the finals of the Maui Invitational to Syracuse. A blowout victory over Illinois, 109-74, would get the Big Ten season started in high fashion for Indiana. Calbert Cheaney would lead the way with 30 points, and Eric Anderson added a double-double of 20 points and 10 rebounds. Taking care of business with a win over Northwestern, the Hoosiers would now travel to West Lafayette with a showdown against Purdue. In a game where there was a constant swing of momentum from both teams, and, where IU stars Calbert Cheaney and Eric Anderson had to play the final ten minutes of the game with four fouls each, Indiana would pull out a victory 65-62, thanks in part to junior Jamal Meeks forcing a late Purdue turnover (Meeks had missed two free throws before the Purdue possession which would have sealed the victory for IU).

The 3rd-ranked Hoosiers would suffer their first blemish in conference play in Bloomington to the hands of the Ohio State Buckeyes, the 4th ranked team in the country. In a game where OSU led by as many as 22 points, which was worn down to three by a stout Indiana press, the Buckeyes would prevail, 93-85. It was clear to many that the Big Ten title was a two horse race — Indiana and Ohio State.

Over their next six conference games, the Hoosiers would take care of business against the likes of Michigan, Michigan State, Wisconsin, Minnesota, Northwestern, and Purdue. In front of a host of former IU players, including John Ritter (a member of Bob Knight’s first team at IU), Glen Grunwald, Steve Alford, and Jay Edwards, making his first return to Assembly Hall since forgoing his IU career for the NBA, Indiana took care of business against the Boilermakers, 81-63. The Hoosiers now stood 10-1 in conference play.

Things would get bumpy for the Hoosiers as they would drop their next two straight in Big Ten play to the likes of Ohio State and Iowa. Many considered the Ohio State game, a 97-95 loss in double OT, to have been the very best game during the 1990-91 college basketball season. The Ohio State game, in many ways, showed the nation of the capability of freshman Damon Bailey, who carried the Hoosiers in both the first and second overtime periods with Calbert Cheaney fouling out in regulation. IU would bounce back, destroying Michigan 112-79 at home on February 24th. In a rare occurrence, the Hoosiers actually had more steals (8) than turnovers (6) against the Wolverines.

In their final four games of the regular season (three of which were played on the road), Indiana went 4-0, defeating Michigan State, Wisconsin, Minnesota, and Illinois. The two consecutive losses to Ohio State and Iowa earlier in the season, however, proved to be quite hurtful, as Indiana finished the conference season tied with Ohio State at 15-3. Ohio State would be awarded with the #1 seed in the Midwest Region of the 1991 NCAA Tournament, while Indiana settled for the #2 seed in the Southeast Regional (although Indiana did get to play their first round games in Louisville, only a few hours from Bloomington).

After victories over Coastal Carolina and Florida State, Indiana would face a tough Kansas team in the Sweet Sixteen. Indiana was sluggish from the start, and ended up down 49-27 at half, their largest halftime deficit of the season. The Jayhawks would cruise to a 83-65 win, and would eventually make it all the way to the NCAA title game before falling to the Duke Blue Devils.

The 1990-91 season had been the breakout for sophomore Calbert Cheaney, who led Indiana with a 21.6 ppg average. Additionally, he would become the first player in IU basketball history to have over 1,100 points after his sophomore season. Cheaney would also earn third-team All-American honors, and first-team All-Big Ten recognition. Indiana junior Eric Anderson would earn second-team All-Big Ten honors, and Damon Bailey would be recognized as the Big Ten Freshman of the Year.

With only senior Lyndon Jones graduating, Indiana would return a very talented group that would be posed to build on a successful season in 1990-91 and set even higher goals for the 1991-92 season.