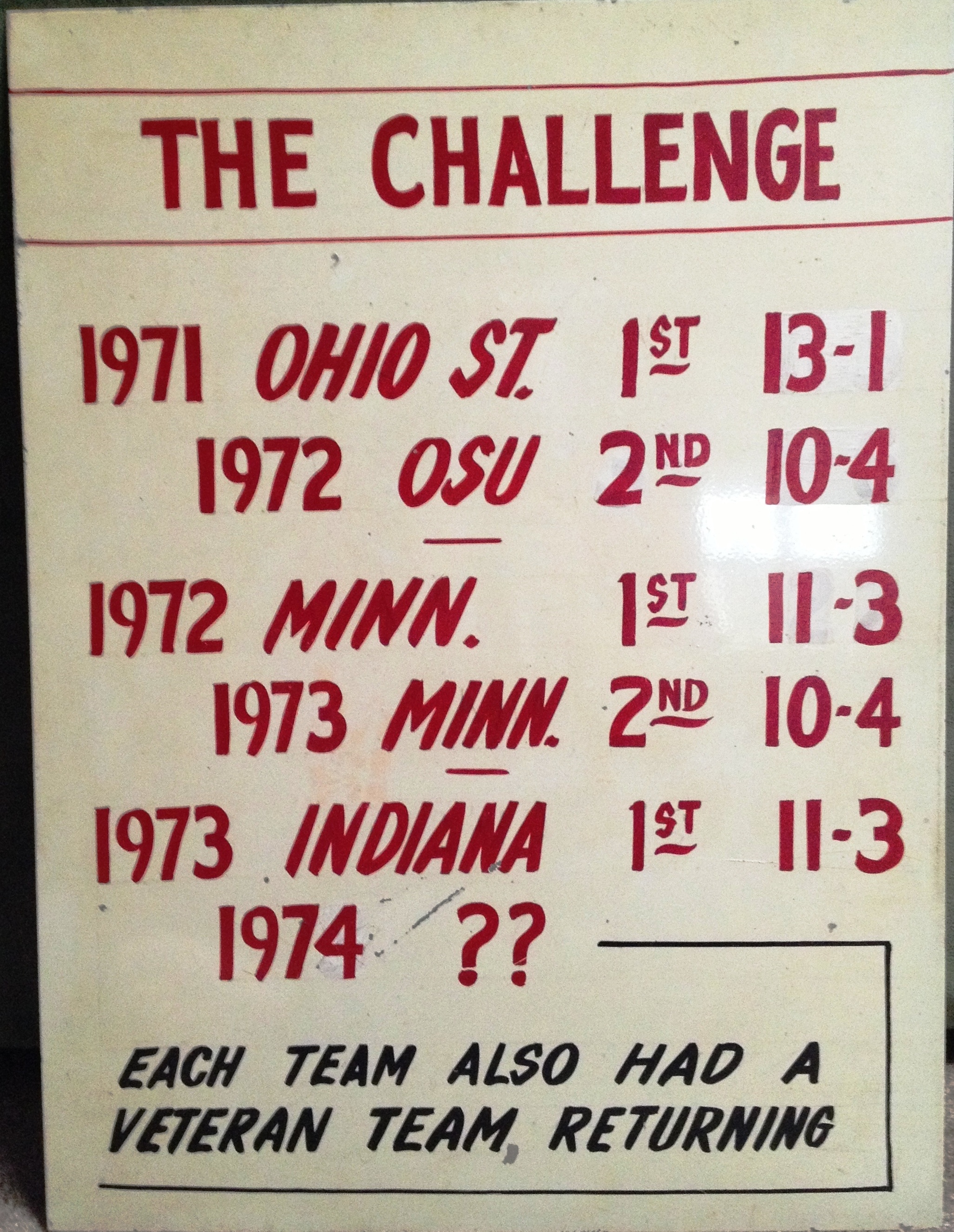 Collector’s note: This is a rare, one-of-a-kind hand-painted sign that appeared in the Indiana University basketball locker room for the 1973-74 season. Bob Knight was the kind of coach that would always use motivational messages in the locker room to get every ounce of effort out of his players. “The Challenge” referred to IU repeating as Big Ten Champions, something the 1972 Ohio State Buckeyes and 1973 Minnesota Golden Gophers were not able to do. Indiana’s “Veteran Team” would includes the likes of Steve Green, John Laskowski, Quinn Buckner, and Jim Crews.

It did not take long for a Bob Knight-coached team to make a splash in Bloomington.

In only his second season as the head coach at Indiana (1972-73), Knight’s Hoosiers would reach the NCAA Final Four.

With John Ritter and Steve Downing graduated, the Hoosiers of 73-74 would be talented, but young. The core group that would go on to lead IU to the 1976 NCAA title — Kent Benson, Scott May, Bobby Wilkerson, Quinn Buckner, and Tom Abernathy — would be only freshmen and sophomores.

IU entered conference play with a 7-2 record, defeating the likes of Kansas and Kentucky along the way. After letting a lead slip away at Michigan, which led to a 73-71 loss, Indiana regrouped and reeled off 12 straight victories, including a dominant victory over Michigan in Assembly Hall, 93-81, behind 37 points by junior Steve Green. The win was significant as Indiana now stood at 8-1 in conference play and atop the Big Ten standings.

In its final 5 games of regular conference play, Indiana went 5-1, the lone loss to Ohio State. The loss, however, would prove costly, as Indiana and Michigan finished the Big Ten season tied atop the conference standings at 12-2.

Because the teams had split the season series, and due to the fact that no post-season conference tournament yet existed, Indiana and Michigan would face off for a third time in a special playoff game to be held at the University of Illinois, a neutral site. Michigan prevailed, 75-67, propelling them into the NCAA Tournament. (NCAA rules of the time only allowed the conference champion to play in the NCAA Tournament. Indiana would instead play in the short-lived Conference Commissioners Association Tournament (CCA), defeating the likes of Tennessee, Toledo, and USC to take home the tournament championship.)

The Big Ten co-championship for Indiana in 1974 may not have been completely fullfilling for Coach Knight and his team, but the talent on his roster was only beginning to show its full potential.

The seasons to come would be quite rewarding.