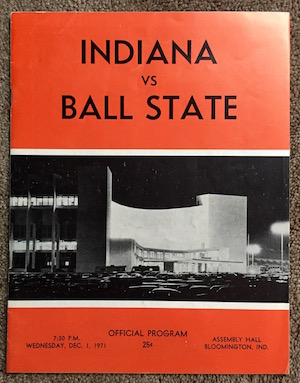 The 1971-72 Indiana men’s basketball season would be one of many new beginnings.

A long overdue new facility, Assembly Hall (original seating of 16,666), would make a statement that Indiana University was committed to providing a competitive atmosphere for its basketball team. Gladstein Fieldhouse had been home to the Hoosiers since 1960, but was never intended to be permanent.

Along with the hire of Bob Knight as its new head basketball coach (replacing Lou Watson), excitement was in the air. Knight would bring to IU a new system, and, a new fashion statement with the introduction of the famed “candy-stripe” warm up pants.

This December 1, 1971 Indiana versus Ball State program is from the very first basketball game played at Assembly Hall.

The Hoosiers were victorious 84-77, behind the stout interior play of Steve Downing and Joby Wright, returning players from Lou Watson’s 1970-71 team. Downing grabbed 26 rebounds against Ball State, which to this day remains an Assembly Hall single-game record.

IU would go on to a 17-8 overall record, 9-5 in the Big Ten that season. However, a new era was in the works in Bloomington. IU would reach the Final Four in 1973 for the first time since 1953, setting the stage for years of success for Bob Knight and his Hoosiers.