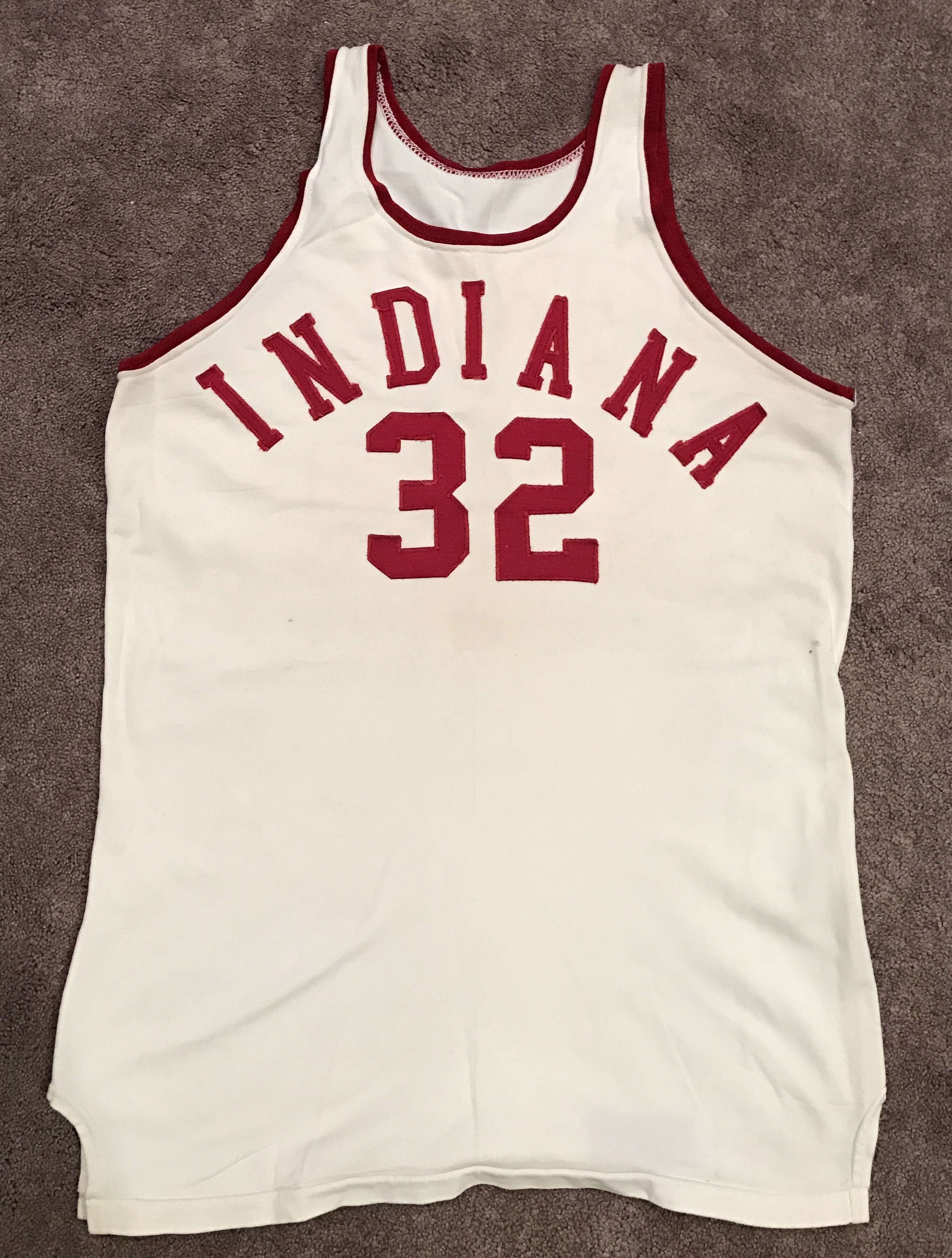 I’m going to preface this by saying that the story I am about to tell is straight out of “American Pickers.”

It involves digging through garbage, 40+ years of old moldy t-shirts, cardboard boxes, fossilized mouse turds, and anything else you could expect to find in an old garage.

He was in the sports equipment and apparel business for over 40 years, and his garage became a dumping ground for back stock that never sold, new old stock (NOS) of blank t-shirts and sweatshirts, and about every variety of jock strap known to man (yes, there are choices).

The family told me that he was friends with former IU basketball coach Bob Knight, and over the years he had accumulated lots of IU memorabilia including football schedule posters, photos, pocket schedules, and literally the largest collection of Antwaan Randle El mouse pads that I had ever seen. (Back in 2001, Indiana University advertised their star football player, and Heisman finalist on nearly anything they could find. To see over 200 of these mouse pads was needless to say, a little overwhelming.)

Going into the situation, I didn’t have high expectations.

Finding some football schedule posters from the 70s and 80s would be neat, but they are fairly common. Nonetheless, I began digging.

There was a huge pile of t-shirts five feet high, and each layer was like going back in time.

It started with 1992 Copper Bowl t-shirts, then Liberty Bowl shirts, then All-American Bowl shirts, and a few hats. The occasional generic IU basketball t-shirt would show up during the dig, but the condition was rough. Nothing was really salvageable.

But then, things, got interesting.

I came to a group of plain white t-shirts that seemed to be used to wrap something up. I didn’t think much of it at first, and tossed them aside. However, something caught my eye in the stack: a vintage Rawlings basketball jersey tag. Given that the gentleman was in the sports equipment business, I thought it may have been a generic jersey.

However, I nearly fell over when I pulled it out from among the plan white t-shirts that had surrounded it for over 4o years and finally got a good look:

In fact, the style of the jersey is one of my all-time favorites in Indiana University basketball history.

For some reason, though, I had the hardest time recalling who wore 32. I embarrasingly had to look it up, and I was astonished: the jersey was worn by former IU All-American Steve Downing during his first two seasons at Indiana: 1970-71 and 1971-72.

I presented all the items that I had found on the pick to the kids of the property owner, explained the significance of the jersey, and finalized the purchase. As a collector, it was one of the greatest feelings in the world. I rushed straight home.

Once the confirmation was made through photo-matching, I had so sit down at my house and do more research. I knew a lot about Downing, but wanted to know about every game that he played in wearing this jersey.

Steve Downing had arrived on campus in the fall of 1970 along with his former Indianapolis Washington High School teammate, George McGinnis. The 1970-71 season would be the last for IU head coach Lou Watson.

Even with the phenomenal scoring season of McGinnis, who averaged 29.9 ppg (still an all-time IU record), the Hoosiers struggled to a 17-7 record (9-5 in the Big Ten). Given the talent on the team of McGinnis and Downing (who averaged a solid 9.6 ppg, and 9 rpg), as well as fellow sophomores John Ritter and Joby Wright, the season was one of disappointment.

Watson would resign at the end of the season amid a cloud of negativity from his own players, and from Hoosier fans.

Bob Knight started his IU career in the 1971-72 season, which was Downing’s junior season. McGinnis had left Indiana for the ABA after one season, a huge blow for the Hoosiers. However, Ritter and Wright were be back, and Knight’s Hoosiers would handle the coaching transition well.

Downing, wearing the above jersey, would go on to have a great junior season.

In the very first game in the newly opening Assembly Hall, on December 1, 1971, the Hoosiers were victorious, 84-77. Steve Downing pulled down 26 rebounds, which to this day remains an Assembly Hall record.

Ten days later, against Kentucky, Downing had the type of performance that would be talked about for years to come (and still is). Having suffered a knee injury against Kansas on December 6th, Downing was not at 100%. However, in a game that would go to double-overtime, Downing played every minute, scored 47 points, and grabbed 25 rebounds, helping to defeat Kentucky, 90-89.

I was astounded to find out the significance of the jersey. It was the kind of experience (the pick, the discovery, and the research) that makes me appreciate the history of Indiana University basketball even more.

As a collector, it doesn’t get any better!