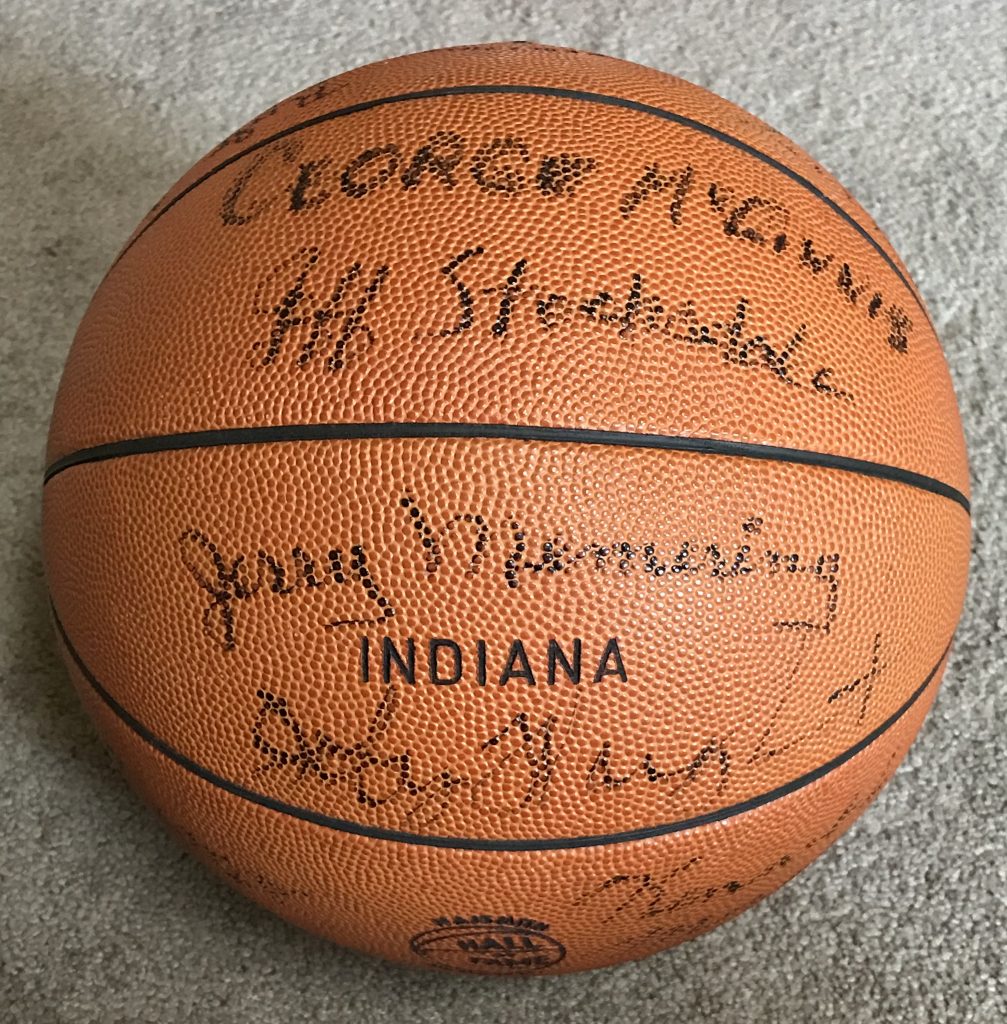 Collector’s note: I have always had a great passion for collecting team-signed IU balls. If they connect to a key season, such as a Big Ten and/or NCAA title, the relic is even that more significant.

When I was able to acquire this 1970-71 ball, I felt very certain that it was probably one of a kind, especially since the ball is an official game used “INDIANA” ball. The key signature on the ball is obviously George McGinnis, whose lone season at IU stands out as one of the best of all time.

Team-signed IU basketballs, especially those that pre-date the 1980s, are becoming harder and harder to find.

The Lou Watson era of Indiana basketball is an oft-overlooked six seasons of IU history.

Considering his predecessor (Branch McCracken) and his successor (Bob Knight) are responsible for Indiana’s five national titles, it’s easy to look upon Watson’s helm as head coach and dismiss it.

Despite winning a Big Ten title in 1967 (18-8 overall, 10-4 in conference play), Watson’s record as head coach for his other five seasons in Bloomington produced only one winning season, that coming during the 1970-71 season.

Jerry Oliver arrived in Bloomington to be an assistant under Lou Watson in the fall of 1968. He had won a state title at George Washington High School in Indianapolis in 1965, and his 1967-68 squad included talented prep up-and-comers George McGinnis and Steve Downing. When Downing and McGinnis became coveted recruits all over the country, IU had the inside track to bring the two to Bloomington with Oliver on the staff.

Following a dismal 7-17 season in 1969-70 (the Hoosiers finished dead last in the Big Ten Conference) in which Oliver served as interim head coach for Watson (who had back surgery and had to sit out the season), bringing in players of the caliber of McGinnis and Downing gave IU fans hope of a quick turnaround.

Lou Watson returned to the sidelines for the 1970-71 season, and his squad featured six incoming sophomores (freshman would not be eligible to play until the 1972-73 season) in addition to Downing and McGinnis. Other noteworthy underclassmen included John Ritter out of Goshen, Indiana, who would complement a roster that included junior Jim “Bubbles” Harris, the leading scorer returning to the team, and Savannah, Georgia native, junior Joby Wright.

On paper, the talent may have been the best of any Watson team up to that point, and some in the media had Indiana tabbed as a favorite to win the conference crown.

Vern Huffman, who was an All-American in both basketball and football during his time at Indiana from 1932-1936, said at one point during the season: “They may go all the way to the NCAA finals if they can put everything together.”

The first major test for the Hoosiers came on December 12th when 3rd-ranked Kentucky came to Bloomington. During a hard-fought contest by both teams, and despite a major performance by George McGinnis with 38 points and 20 rebounds, the Wildcats eked out a 95-93 victory.

Despite the setback against Kentucky, Indiana rebounded in tremendous fashion against 6th-ranked Notre Dame with a 106-103 win in South Bend. Austin Carr, Notre Dame’s All-American senior who had lit up the Hoosiers for 30 points a season prior, went for a season-high 54 points in the loss (the 54-point performance by Carr remains a Notre Dame record in a losing effort). McGinnis and Downing led Indiana with 29 points each.

Indiana returned to the friendly confines of the “New Fieldhouse” with wins over Ohio University and Butler on December 18th and 22nd to move to 5-1 on the season.

The west coast awaited Indiana for a three-game commitment in the Far West Classic in Portland, Oregon.

In the opening game, Indiana struggled out the gate, including a 23-point deficit at half, before falling to Washington State 83-80. Indiana took care of business in its next two games, defeating San Jose State (86-76) and Ohio State (85-77), a rare matchup against a conference foe prior to the beginning of Big Ten play.

Indiana then had nine days off before the start of conference season. At 7-2 overall, many in Bloomington still felt confident that they had yet to see the best from their Hoosier squad.

The conference opener against Northwestern resulted in a 101-90 victory in Evanston, and it was yet another example of just how dominant McGinnis could be. In addition to his team-high 38 points, he also grabbed 23 rebounds. Double-doubles were becoming a common occurrence for the superstar sophomore.

IU split its next two games, winning at home against Minnesota but losing on the road to Michigan.

An underwhelming non-conference foe in Northern Illinois then gave Indiana (9-3) all it wanted and more on February 2, 1971, as the Huskies commanded a lead as high as 11 points — including a six-point lead at the half. But behind 45 points (a career high) and 20 rebounds from “Big George.” Indiana survived with a 113-112 victory. Joby Wright added 19 points, while John Ritter poured in 14. IU head coach Lou Watson was not surprised his squad came out sluggish in the game, given the two weeks off since the Michigan loss.

In-state rival Purdue traveled to Bloomington five days later to resume Big Ten play. Indiana had not defeated the Boilermakers since the 1966-67 season.

Indiana was in command most of the game, building a lead to 13 points in the second half. However, Purdue was able to chip away at the lead with consistent free throw shooting, and after McGinnis fouled out of the game with 5:32 remaining Purdue would go on to secure the 85-81 victory.

Many fans complained about the unbalanced foul calling by the officials, which had prompted Purdue’s frequent charity stripe visits.

Indiana’s most inspiring and impressive play of the season would come over the next six ball games.

Indiana went on the road for two straight victories against Michigan State and Iowa. Two late free-throws by Wright sealed the victory over MSU, 70-71. Indiana would take care of business handily in their rematch against Michigan State 90-76 on February 16, led by McGinnis’ 37 points and 12 rebounds, as well as 14 points from “Bubbles” Harris.

The Hoosiers’ next three foes included Illinois, Michigan, and Northwestern, all resulting in victories. Indiana’s victory over Michigan (88-79) handed the Wolverines their first conference loss of the season. McGinnis led IU with 33 points (seems like a trend, right?), but it was his high school teammate Downing’s stat line of 28 points, 17 rebounds, and 10 blocks that was most impressive.

Downing is still, to this day, the only Hoosier to record a triple-double.

With four conference games remaining, Indiana stood 8-2 and tied for second place with Michigan. So the Hoosiers were still in good position to contend the Big Ten title. But then Indiana traveled to Wisconsin on March 2nd as the heavy favorite and came home devastated, losing in double-overtime 94-87. The loss eliminated any scenario of securing a ninth Big Ten title.

IU did rebound against Iowa on March 6, winning 104-88 behind 28 points from McGinnis, and 23 points each from Harris and Downing. The Hoosiers dropped another game to Ohio State (91-75), who would clinch the Big Ten title with the victory.

The day following the OSU loss, news began to circulate that Indiana coach Lou Watson was meeting with his team (except sophomore John Ritter), along with IU athletic director Bill Orwig and Indiana University president John Ryan. It was revealed to Watson that players had reached out to an IU faculty member, Dr. John Brown, with concerns regarding Watson as coach.

The player issues were revealed in the meeting, as well as reports of alumni airing their grievances to Orwig about their lack of faith in Watson as coach.

In discussing his decision, Watson cleared the air: “It started when my players had a meeting Sunday without my knowledge to discuss my problems. I would have liked to finish out the year, but after this happened, I felt I had to resign. I was hurt by the fact that the players didn’t talk this over with me.”

With Watson stepping down, assistant coach and former interim head coach Jerry Oliver took over for Indiana’s season finale against Illinois on March 13th. With the off-court distractions surrounding Watson’s exit, and the uncertainty of who the next head coach would be, Indiana faltered from the get-go, losing to a less talented Illinois squad, 103-87.

Despite scoring only 17 points (his season low), McGinnis set a new Big Ten scoring record for a sophomore with 418 points, breaking the record previously held by Purdue great Rick Mount (416).

Given the outlook for the season, and the talent on the roster, many Hoosier faithful considered 1970-71 to be one of the most disappointing seasons in program history. The hits would keep coming for IU fans when, on April 3, George McGinnis announced he would be leaving IU to playing basketball professionally.

With the basketball season over, the IU athletic department announced a nationwide search for its next basketball coach, one that would transition the program into a new era of Indiana basketball.