Collector’s note: IU media guides are one of those items to me that you either go all in and attempt to collect every year, or you don’t even bother. I have collector friends who do not have any interest in IU basketball media guides at all. To me, media guides are fascinating, especially from around 1980 and prior. The biographical information is a great read, and, what’s always interesting (especially in the versions from the 1950s and 60s) is the season outlook provided by the head coach.

The seasons of 1961-1965, which were the final four seasons for head coach Branch McCracken, never amounted to a great deal of team success for the Hurryin’ Hoosiers, as no team finished higher than 3rd in conference play.

Many attribute the lack of the success, as well as the inability for Indiana to recruit the top players from the state of Indiana, to the NCAA recruiting violations incurred primarily by the Indiana University football team under head coach Phil Dickens in the late-1950s. These violations would tarnish the reputation of the athletic department, something that may very well have turned off potential basketball recruits.

The 1962-63 team would graduate two key top scoring seniors in sharp shooter Jimmy Rayl and forward Tom Bolyard. Rayl would leave Indiana as one of its greatest all-time scorers, twice scoring 56 points in a single game (1962 vs. Minnesota and 1963 vs. Michigan State), which is still an Indiana single-game record. The Hoosiers would finish the season in 1963 13-11 overall and 9-5 in conference play, good for 3rd place.

Returning for the Hoosiers in 1963-64 would be the twin dynamic duo of Tom and Dick Van Arsdale, as well as the versatile Jon McGlocklin, a junior from Franklin, Indiana. Questions were plenty on how the Hoosiers would be able to replace Rayl and Bolyard. Additionally, there were no seniors on the roster, meaning that leadership questions were abundant for coach Branch McCracken.

A glance over the roster also revealed a weakness in the middle, as the Hoosiers were lacking a skilled big man. Nonetheless, with experience returning from the previous season, high hopes were in place for a successful season.

Indiana would start off the season strong with victories over Southern Illinois and Notre Dame (played at the Fort Wayne Colliseum). The Van Arsdale brothers duo would going on a terror in the Notre Dame game with Dick going for 42 points and Tom adding on 34 points. North Carolina and Kansas State (an eventual 1964 Final Four team) were up next, which provided Indiana with their first two losses. In both losses, weakness at the center position proved to be evident.

The Hoosiers were able to bounce back with victories over Missouri (100-76) and Detroit (110-92) with Tom and Dick Van Arsdale going for double-doubles against Missouri, and combining for 53 points against Detroit. The victories would put IU 4-2 overall. However, things would begin to make a disastrous turn with the pre-season conference ending, and Big Ten play commencing.

Beginning with a double-header losses at Oregon State, the Hoosiers would reel off eight-straight losses, including their first four conference games against Iowa, Northwestern, Michigan State, and in-state rival, Purdue. Throughout the losses, the Van Arsdale brothers on-court play provided the only bright spot.

Nevertheless, Dick and Tom would not be able to win games alone.

The Hoosiers were dealt another non-conference loss (amidst Big Ten play) in Chicago against Loyola on January 27th. A double-double by Tom VanArsdale alone would not be enough as IU fell, 85-78.

A game against Purdue in West Lafayette on February 1st would resume conference play, but a similar result would follow as the Hoosiers would drop yet another, 87-84. Following the Purdue loss, “Letters to the Editor” in the Bloomington Herald Telephone were going all in against Branch McCracken, calling for his immediate firing.

Clearly, McCracken was aware of the heat.

In a article from the Terre Haute Tribune, McCracken stated “the kind of job I would want would be coach of an orphanage, where there are no parents to come around, or at a state penitentiary, where the alumni never come back.”

Illinois would arrive in Bloomington on February 3rd with the Hoosiers, sitting at 4-10 overall, desperate to try to salvage some pride in their season. The trio of Tom and Dick Van Arsdale and Jon McGlocklin would go for 79 points combined to propel IU to a 104-96 victory over the Fighting Illini, snapping the eight-game losing streak, and giving Indiana its first conference victory.

Season ends with a whimper (and criticism)

There would be little to cheer about over the next three game, however, as the Hoosiers dropped three straight to the likes of Ohio State, Iowa, and eventual Final Four team, Michigan.

Criticism once again came pouring in as many of the Hoosier faithful were losing faith in McCracken’s coaching ability. The Hoosiers were able to bounce back once again with three straight victories over Wisconsin (x2) and Purdue, but the roller coaster season was unsettling to many fans.

With Indiana going 1-2 on their final three games, IU would conclude the season at 9-15 overall, and 5-9 in Big Ten Conference play. The season would be the worst for Indiana in terms of wins since the 1954-55 season, and only the third time in Branch McCracken’s coaching career at Indiana that the Hoosiers would not reach 10 wins overall.

With no seniors graduating, Hoosiers fans would gear up, hoping for a stronger season in 1964-65. Little did many know, however, that it would be the last season for the man who had brought Indiana its first two NCAA basketball titles. 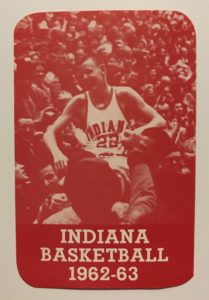 Collector’s note: When collecting Indiana basketball programs and tickets, I’ve always wanted to focus on collecting key games as a priority. To other IU collectors I’ve encountered over the years, this is a similar goal. Whether it would be Calbert Cheaney’s Big Ten scoring record, Walt Bellamy’s single-game rebounding record, or Steve Downing’s monster game of 47 […] 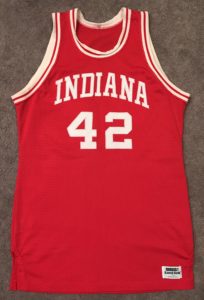 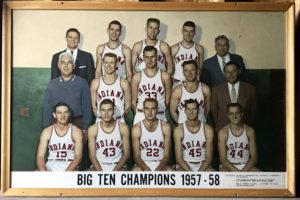 I have always been obsessed with the older large versions of Indiana basketball team photos. This variation, complete in its original frame and under the original glass, displays beautifully still to this day. 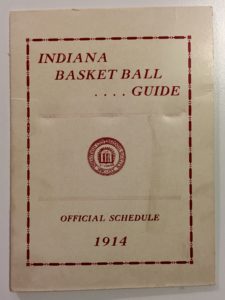 IU schedules have always been one of my favorite items to collect. This 1914 is very unique, and probably the most detailed IU schedule variety I have ever seen.

The 2000-01 season would be not only a season of change at the head coaching position, but also one with uniforms. This season also featured one of the greatest wins in the history of Assembly Hall.