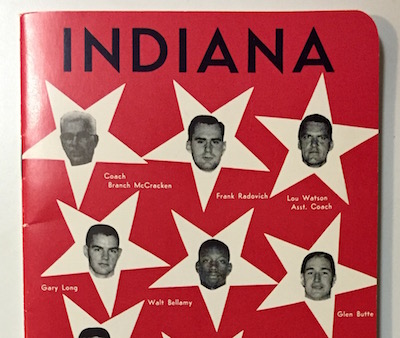 Indiana basketball head coach Branch McCracken’s 1959-60 team may not ring a bell to many fans as one of the better IU basketball teams in history.

After all, they did not win an NCAA title, nor a Big Ten championship.

But the lack of a banner should not preclude this team from being discussed among Indiana’s all-time greats.

On paper, the Hoosiers were experienced and balanced. Led by All-American center Walt Bellamy, IU had a superior presence in the paint. Bellamy’s 22.4 ppg and 13.5 rpg would lead the Hoosiers, but the upperclassmen duo of Herbie Lee and Frank Radovich would add additional firepower to the Hoosier lineup.

McCracken once noted that his team could beat anyone in the country if they decided to show up and play as a team, instead of worrying about individual stardom.

Indiana would enter Big Ten Conference play with a strong 8-1 record, their lone loss being by only three points to Missouri. However, IU would slip early in their Big Ten season, losing three consecutive games to the likes of Purdue, Northwestern, and eventual NCAA Champion, Ohio State (for whom future IU basketball coach Bob Knight was a key reserve).

IU would reel off 11 straight Big Ten victories to end the season, including a dominating 16-point victory over Ohio State at the IU Fieldhouse, OSU’s only conference loss.

What’s more amazing about the victory is that Herbie Lee, a double figure scorer and regular starter, was expelled from Indiana University the morning of the Ohio State game. Even without Lee in the lineup, all five starters for IU would score in double figures, led by Walt Bellamy with 24 points.

Per college basketball rules of the day, only the conference champion would move on to play in the NCAA Tournament. IU would settle for second place in the conference, finishing 20-3 overall for the season and also finishing 7th in the final Associated Press Poll. Ohio State would go on to easily clinch the 1960 NCAA title, led by greats Jerry Lucas and John Havlicek.

Bill Murphy, avid IU fan and author of the book Branch, and someone who attended many games during the 1959-60 season, is convinced that IU would’ve beaten Ohio State in the 1960 NCAA Tournament, if they had been allowed to play.