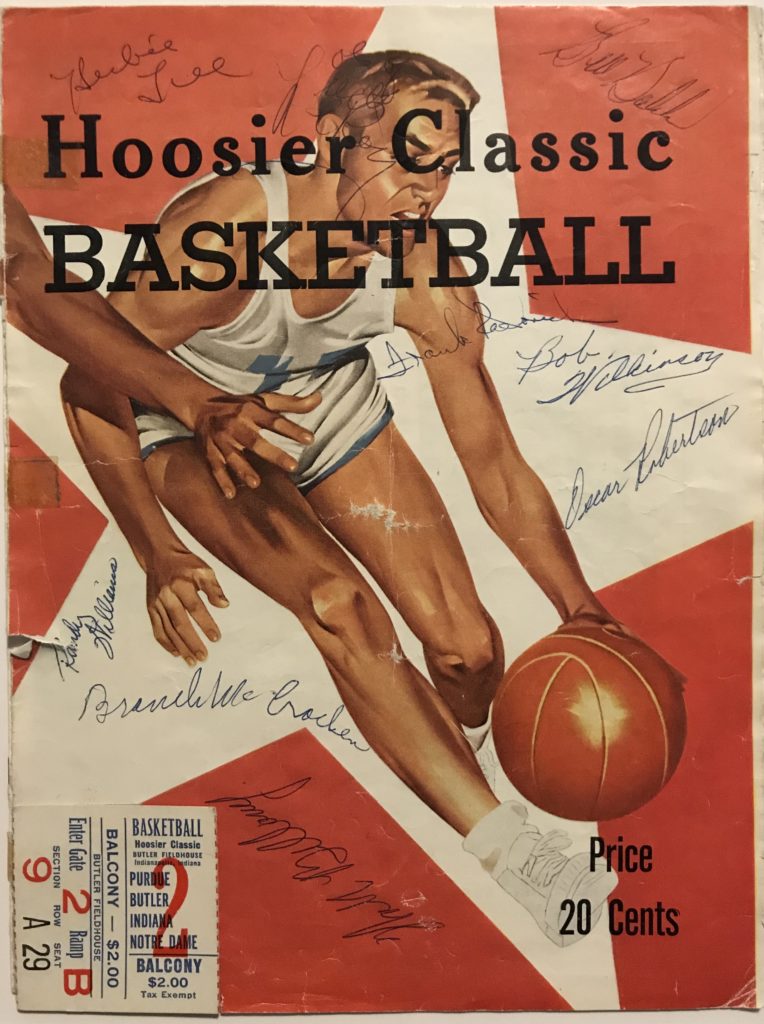 Collector’s note: This signed program ranks high in terms of the more unique items in my personal collection.

The program itself represent the tournament that was the precursor to what is now the “Crossroads Classic.” Closer inspection of the signatures includes head coach Branch McCracken, an early signature of sophomore Walt Bellamy, Frank Radovich, Herbie Lee, Leroy Johnson (“Lots of Luck Leroy”), Randy Williams, Bob Wilkinson, and Bill Balch.

The most impressive signature on the program, however, seems somewhat out of place. The young fan who attended the Hoosier Classic that season was able to secure the autograph of then-Cincinnati Bearcat, and one of the greatest basketball players of all time, Oscar Robertson. The “Big O,” who was in the middle of his junior season at Cincinnati, was back home in Indianapolis spectating the in-state games between Indiana, Butler, Notre Dame, and Purdue.

In terms of rarity, signatures of Indiana teams from the late-1950’s are somewhat obscure. Branch McCracken signatures are around, but I’ve only seen a handful of Walt Bellamy signatures from early in his Indiana career.

Head coach Branch McCracken had talent on both squads, starting with center All-American Archie Dees, but questions remained about the ability of the team as a whole to perform when it mattered.

Both teams started out very slow and would gain momentum during conference play, finishing 10-4 both seasons to secure Indiana’s first back-back titles since the ’53 and ’54 seasons. The 1958 team would graduate six seniors including Dees. Looming questions remained about if McCracken’s squad would once again feature another talented center to following in the footsteps of Don Schlundt and Archie Dees.

Walter Jones Bellamy hailed from the small town of New Bern, North Carolina. He was attracted to Indiana University in many ways from his high school basketball coach, Simon Coates, who had attended IU for graduate work, and had become acquainted with head coach Branch McCracken.

Bellamy would later describe his decision to attend Indiana:

In the summer after my junior year of high school I played with some guys from Indiana. Indiana at the time was the closest school to the South that would accept African-Americans. It was an easy transition for me to make. Not that I was naive to what was going on in Bloomington in terms of the times, but it didn’t translate to the athletic department or the classroom. Every relationship was good.

Bellamy would enter his sophomore season, and first year of varsity eligibility, with the likes of talented in-state players Leroy Johnson, Herbie Lee, and Gary Long. Even with the talent coming in, added with upperclassmen Gene Flowers, Bob Wilkinson, Frank Radovich, uncertainty remained as to how well the team could perform. Additionally, as back-to-back defending Big Ten Conference Champions, expectations were high.

In the season opener, Indiana was able to do something that the ’57-’58 squad had failed to do: win the opening game. In fact, the first game loss in 1957 was a first during the Branch McCracken coaching era at Indiana.

Facing Drake on December 1, 1958, Indiana would be victorious 68-59 behind 16 points from Hammond native Frank Radovich, and 12 points and 15 rebounds from Walt Bellamy. Double-doubles would be a common place during Bellamy’s career. His 59 overall remain tops in IU basketball history.

In its first road test of the season, at Kansas State, Indiana struggled with foul trouble as big man Walt Bellamy would foul out of the game with eight minutes remaining. Indiana lost 82-79.

Following a victory back in Bloomington against Missouri, behind 32 points from Bellamy, Indiana would take a west coast trip to Eugene, Oregon for a rare double-header contest against Oregon State on December 19th and 20th. After a victory in game one 57-53, Indiana couldn’t hang on to a stable lead in game two, losing 73-69.

Indiana would not be able to secure their next win until the conference season began. Over the next three games, all away from the friendly confines of the IU Fieldhouse, Indiana would lose to in-state foes Notre Dame and Butler, then drop their Big Ten Conference opener in East Lansing to the Michigan State Spartans, 79-77.

Following a four-game losing streak, Indiana would finally return to the IU Fieldhouse for the first time in almost a month as in-state rival Purdue came to town on January 5, 1959. The Hurryin’ Hoosiers finally broke through with a 77-69 victory behind 27 points from junior Frank Radovich.

Then, only four days before Indiana was set to host DePaul, it was announced by the Indiana University Athletic Department that IU basketball players Bob Wilkinson, Leroy Gamble, and Glen Butte were declared academically ineligible. While Gamble and Butte had only played sparingly through the 1958-59 campaign, Wilkinson was a starting guard.

Gary Long would be inserted into the starting lineup for McCracken’s squad. In fact, in his first game in the starting role, Long scored 17 points to help Indiana defeat DePaul, 75-69.

Indiana would next face the Ohio State Buckeyes in Columbus for a showdown on February 2nd. What happened was a record performance that still is talked about to this day. Six Hoosiers scored in double figures, led by Gary Long with 29 points, while sophomore Herbie Lee added 20.

What is so amazing about Indiana’s performance is this simple stat: Indiana led at half 49-48 and ended up winning 122-92. Indiana’s 122 points broke the previous Big Ten record of 113 points scored by the 1952-53 Indiana squad that went on to win the NCAA title. The 122 point total remains an Indiana basketball record to this day.

After securing their third-straight victory against Michigan on February 7th, Indiana would stumble against Illinois, losing 89-83, to remain in second place in conference play. Indiana fans would watch in disbelief as the Hoosiers would blow a 17-0 lead early in the contest and would struggle from the field in the second half, shooting an abysmal 29%.

After bouncing back in Minneapolis against the Golden Gophers 62-57, IU let any and all chances of a Big Ten title slip away, losing four straight games to Purdue, Illinois, Ohio State, and Michigan State. The Spartan victory in Bloomington would clinch the Big Ten title.

Despite the late season slump, Indiana would be able to finish the season on a high note with a blowout victory over Wisconsin at the IU Fieldhouse. The 11-11 overall finish (7-7 in Big Ten play) was a gut check for a team that had looked so promising at many times during the season.

The reality for Coach McCracken was clear: he had a talented, but young squad. However, the play of center Walt Bellamy showed Hoosier fans that another impressive big man was destined for stardom in a Cream and Crimson uniform. In fact, Bellamy’s 17.4 ppg and 15.2 rpg averages were higher than first season averages of stars Don Schlundt and Archie Dees.

Even as Indiana fans may have been down on the 1958-59 squad, considering the successful two seasons prior, many exciting moments awaited with #35 on the floor.