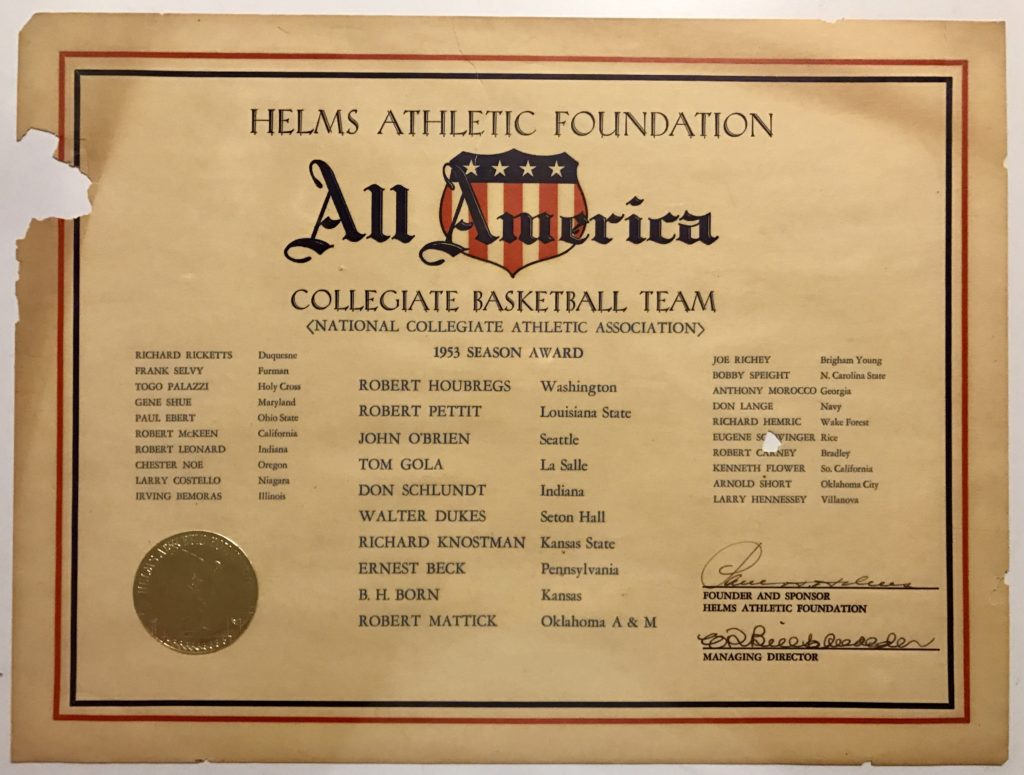 Collector’s note:  The Helms Foundation was a California-based athletic foundation that awarded All-American honors for athletes in basketball, football, and baseball.  Awards for first, second, and third team honors were handed out from the mid-1930s until the early 1980s. College basketball accolades were also awarded retroactively going back to the beginning of  the 20th century.

Certificates and plaques were awarded to the individual player, and additionally, the university or college would also receive a certificate acknowledging the achievement. Helms Foundation awards, especially those that are pre-1960 are hard to find, especially those for first team All-American honors. I have only seen two other Helms Foundation awards honoring Indiana basketball players, and these are in private collections.

It didn’t take long for Branch McCracken, the All-American center for Indiana from 1927-1930, to make a splash as the head coach of his alma mater.

McCracken had been the head coach of Ball State Teachers College (today simply known as Ball State) from 1930-1938 before returning to Bloomington to replace his college coach, Everett Dean, who had left IU to become the head basketball at Stanford. In only his second season, McCracken would lead Indiana to their first NCAA basketball title.

Following a three year stint serving in WWII, McCracken returned to IU in 1946. McCracken’s teams of the late ’40s were competitive, but never broke through to similar success found in 1940.

Fortunately for McCracken, things were looking up.

Don Schlundt, a towering 6’9″ product of Washington Clay High School in South Bend, chose to play at Indiana, and would begin his college career in the fall of 1951. Because of a unique waiver in place with the Korean War going on, freshman would be allowed to compete in NCAA games due to a shortage of male students at U.S. colleges and universities.

Schlundt would take full advantage of the opportunity, averaging an impressive 17.1 ppg during the 1951-52 campaign. As a team, Indiana would finish 16-6 overall, 9-5 in the Big Ten (4th place).

The 1952-53 team would return a veteran group that set the bar high for a successful campaign.

Although senior guards Sammy Miranda and Bob Masters had graduated from the previous season’s team, junior Bobby Leonard and sophomore Burke Scott were able to take over the important backcourt roles with little difficulty. Along with Schlundt, who was out to improve from his fantastic freshman season, juniors Dick Farley and Charles “Chuck” Kraak would round out the starting lineup.

The Hoosier basketball season would not get off to a fast start as Indiana struggled to a 1-2 record, losing to the likes of Notre Dame and Kansas State, both of which were nationally ranked.

Indiana would begin Big Ten Conference play earlier than ever before that season. Conference officials would test a “round robin” format in which each conference team would play each other twice, one at home and one away. This meant that conference play began prior to the winter break.

Indiana would open up play at “The Fieldhouse” (today the Wildermuth Gymnasium) against Michigan on December 20th. The Hoosiers would roll over the Wolverines, 88-60, behind 24 points by Don Schlundt. Three straight victories would follow, all on the road, against the likes of Iowa, Michigan, and Michigan State. Over those three games, Schlundt would average 32 ppg.

The Hoosiers would continue their streak by winning the next five games to improve to 8-0 in the conference, and, a #2 national ranking. In fact, Indiana’s lone blemish during conference play came with the second-to-last game of the season at Minnesota, falling 65-63 when Golden Gopher guard Chuck Mencel hit a long jumper with only two seconds remaining. The loss for the Hoosiers ended their 17-game winning streak.

In the season finale, however, the Hoosiers would rebound with a 68-61 victory over Iowa. The victory gave Indiana a 17-1 conference record, and their 4th conference championship in school history. The Hoosiers would also end the regular season as the #1 team in country.

IU would face DePaul in their first game in the 1953 NCAA Tournament at Chicago Stadium. In a game that was close from start to finish, the Hoosiers would prevail 82-80 behind 23 points from Don Schlundt and 22 from Bobby Leonard.

LSU was be the last hurdle that IU would face in order to reach the national championship game. With the dominant inside/outside game of Leonard and Schlundt, Indiana was too much for the Tigers and prevailed 80-67. Schlundt led all Hoosier scorers with 29.

Indiana would face Kansas in the national title game. Ironically, Indiana had also faced Kansas in the 1940 NCAA title game in which the Hoosiers triumphed. As was the case in the semifinal game, the title game would take place in Kansas City, which provided a much greater “home court” advantage for Phog Allen’s Jayhawks.

The game was tight throughout, with neither team able to jump ahead comfortably. With under a minute to play, the game was tied 68-68. Indiana guard Bobby Leonard would be fouled with 30 seconds remaining and would go to the foul line to shoot two free throws. Leonard would miss the first, but bury the second shot to give Indiana a one-point lead.

The slim margin was enough as Indiana did not allow Kansas a good shot in the remaining seconds of the game. In the end, Indiana would be victorious, 69-68 to clinch their second NCAA title.

Accolades poured in for Don Schlundt and Bobby Leonard following the storied season.

Both IU stars would be honored with First Team All-Big Ten and First Team All-American honors. Additionally, Schlundt and Leonard would be named to the All-Final Four team.

Branch McCracken, who would lead Indiana to its second NCAA title, would be named a consensus National Coach of the Year.