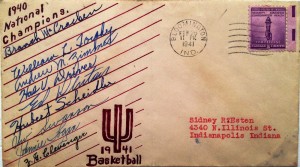 The 1940-41 “Hurryin’ Hoosiers,” as Branch McCracken’s teams were known due to their up-tempo play, had a tall order heading into the season.

Indiana was coming off winning their first NCAA Championship in only McCracken’s second season in Bloomington, and similar expectations were in place.

1st team All-American and 1940 NCAA MVP Marv Huffman had graduated, but the nucleus remained for the 1940-41 basketball team: Bill Menke, Curly Armstrong, Jay McCreary, and Bob Dro. Additionally, Andy Zimmer (a future All-American), and underclassman Johnnie Logan, would play key roles for the Hoosiers, who would go on to finish 17-3 overall, and 10-2 in the Big Ten Conference — one more win than the 1939-40 team had.

However, due to NCAA rules, only the team who finished first in the Big Ten would be eligible to participate in post-season play. Wisconsin, who finished first with an 11-1 record, would claim the 1941 NCAA Championship, the second consecutive NCAA title for a Big Ten Conference team.

This 1940-41 Indiana Hoosiers basketball signed envelope represents a unique relic from this important era in Indiana University Athletics history. So many rare signatures are present:

One of the more unique signatures is that of William “Bill” Torphy, a former unknown member of the 1940 NCAA Championship team, who went on to serve in WWII and tragically perished during the Invasion of Normandy in July of 1944. Torphy’s story was featured in the recent film, Not Pictured.