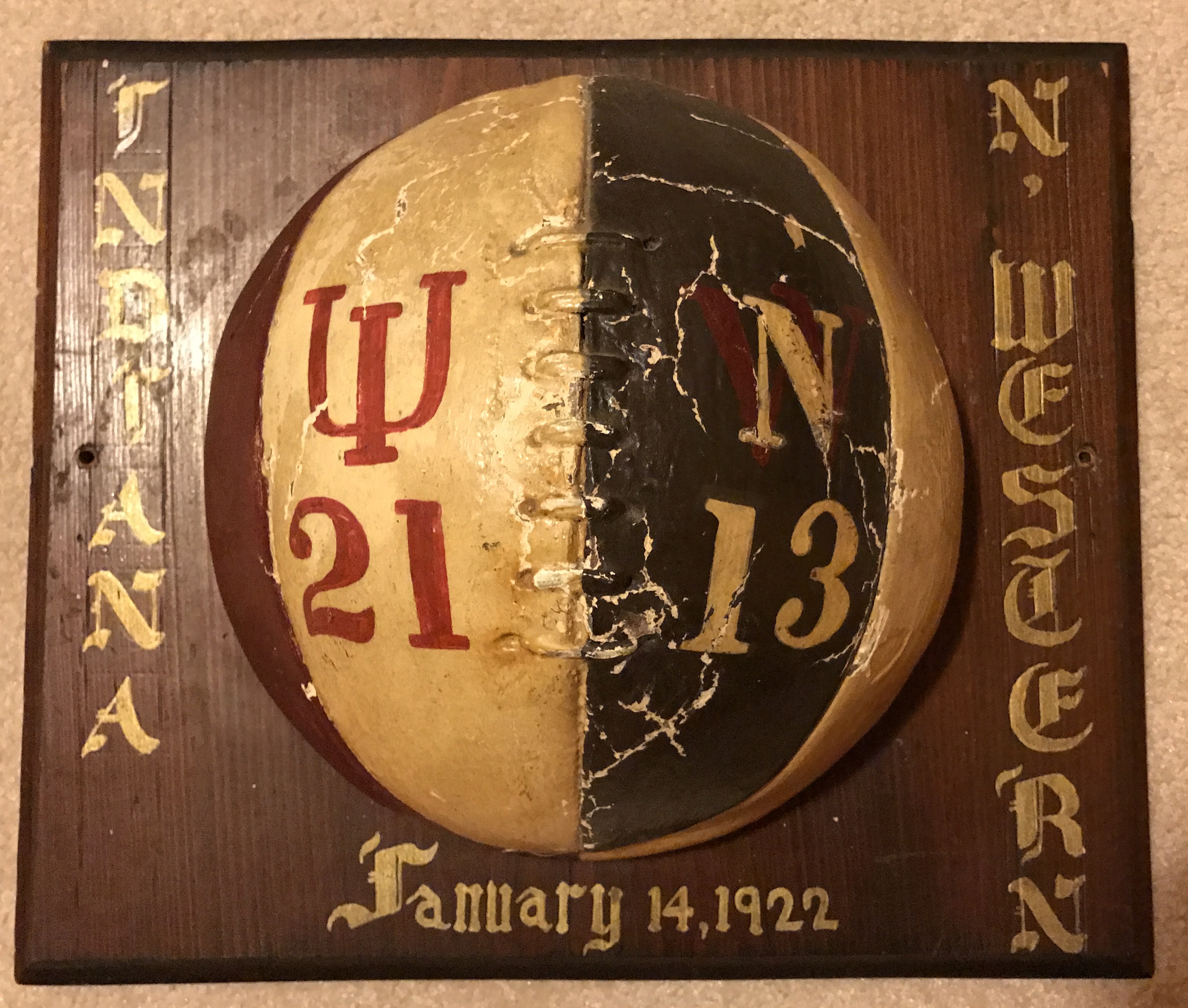 Collector’s note: Painted trophy balls have been around since the late 1800s, and have been used to commemorate sporting achievements. Indiana University began painting game balls from victories in baseball, basketball, and football in the early 1900s, through the 1930s. These would be first displayed in the old “Trophy Room” upstairs in the old Men’s Gymnasium (now part of the IU School of Public Health), and were later relocated to the Commons of the Indiana Memorial Union.

Indiana University trophy balls occasionally come up for auction, but are scarce. This is especially true for footballs, and even more for baseballs. In my time as a collector, I have only seen around ten footballs, and only two baseballs.

The first 21 seasons of Indiana basketball are not often referred to as the “Glory Years.”

In fact, the Hoosiers never won a Big Ten Conference title, nor did they finish above 3rd in conference play from 1900-1921. Indiana would not win its first Big Ten title in basketball until 1926.

The Hoosiers would be led by their 17th different head coach when the 1921-22 season would begin. However, this was a common occurrence at most universities in the country during the early part of the 20th Century as coaching jobs in most sports at the collegiate level were not lucrative positions.

The 1920-21 squad finished an impressive 15-6 overall, even after losing its final four games of the season, all against Big Ten competition. The Hoosiers were led by head coach George Levis, a former star basketball player at Wisconsin from 1913-1916. Levis was a two-time All-American, as well as the Helms Foundation National Player of the Year in 1916.

One major contributor from the 1920-21 team would graduate, leaving a major hole for Levis and the Hoosiers.  Everett Dean, Indiana’s first All-American in basketball, averaged a team high 11.1 ppg his senior season and would head to small Cartleton College to be their head coach before returning to Bloomington in 1924 to take the helm for the hardwood Hoosiers.

With Dean’s departure, Levis’s Hoosiers lacked a clear leader on the floor for the 1922 team. In fact, four of the five starters from the previous season had graduated.  With such a young, inexperienced team (ten sophomores on the roster), Levis would have his hands full when the season began on December 2nd against Manchester College in the old Men’s Gymnasium (now the western-most building of the IU School of Public Health).

Indiana was able to turn it around over its next five games, going 4-1, with victories over Rose Poly (know known as Rose-Hulman), Huntington College, Camp Benning, and their conference opener against the Northwestern Wildcats. Big man Harold Sanford would lead IU with 11 points.  The Hoosiers now stood 6-3 overall as Big Ten Conference play was underway.  However, coach George Levis still had concerns about his young Hoosiers being about to compete in conference play, especially against powerhouses Michigan, Wisconsin, and the Purdue Boilermakers.

After the victory over Northwestern, Indiana would drop its next two conference games in Columbus against Ohio State, and at home against Minnesota. One bright point from the losses was the emergence of sophomore Harold Sanford, a 6’1″ forward from Lebanon, IN, as Indiana’s scoring leader. A non-conference game against DePauw would right the ship once again as Indiana prevailed, 36-32.  Willfred Bahr, another sophomore from Evansville, would lead the way for the Hoosiers with 12 points, while Harold Sanford and team captain Eugene Thomas added 10 points.

Following two more victories against non-conference foe Marquette, and Minnesota, the Hoosiers stood 9-5 overall, a strong record considering a lack of upperclassmen and returning starters on the Hoosier squad. Even with the strong current record, the final six games of the season would be a disappointment, similar to the end of conference play a year prior.

Purdue, the eventual conference champions, would arrive in Bloomington on February 11th and took care of business with a 24-19 victory, including an astounding 18-5 lead at half. The Michigan Wolverines, one of the top teams in the Big Ten would come to town two days later and fall to the Hoosiers 15-14. Indiana coach George Levis considered the Michigan victory a major triumph for his young team and hoped that the win would spark more success going in to the final four games of the season. However, this would not come to fruition.

Just as the Hoosiers had done the season before, Indiana would close the season with four straight losses. Losses to Northwestern in Evanston and Michigan in Ann Arbor led Coach Levis to call for intense practices in order to straight his team out, according to an Indiana Daily Student article.

Plain and simple, Levis was frustrated. “I’m tired of high school basketball from a Big Ten team.” The intense practices did little to save the IU season as Indiana would lose the final two games of the season to Purdue and Ohio State to finish 10-10 overall and 3-7 in conference play, good for 9th place.