The triumphant culmination of the 1980-81 season, which resulted in Indiana’s fourth overall NCAA basketball championship, was one that at many points during the season seemed unattainable.

The Hoosiers got off to a sluggish 7-5 record prior to Big Ten play, including losing to the likes of Clemson and Texas Pan-American. Entering Big Ten play, even with talented players like Isiah Thomas, Ray Tolbert, Randy Wittman, and Jim Thomas, the Hoosiers lacked consistency.

One individual who had seen more time on the bench than action on the floor for much of the season was junior forward Landon Turner. As it turned out, Turner was actually the key to Indiana’s success all along.

Landon Turner arrived in Bloomington in the fall of 1978 out of Indianapolis’ Arsenal Tech High School as part of a four-player recruiting class that included three other Indiana natives: Ted Kitchel, Randy Wittman, and Steve Reish.

Turner, like many players of that era, had reservations initially about playing for coach Bob Knight. Decorated as a McDonald’s All-American, Turner’s skill and athleticism on the basketball floor were expected to transition well under the tutelage of Knight.

However, Turner would quickly find himself in coach Bob Knight’s doghouse as one of five players who were discovered to have allegedly used marijuana during a pre-conference tournament in Alaska. In the end, with three team members being dismissed (Tommy Baker, Don Cox, and Jim Roberson), Turner would remain on the squad and be placed on probation.

Despite that early obstacle during his freshman season, and playing largely in a supportive role, Turner averaged 5.5 ppg along with 3.4 rpg as a member of the 1979 NIT title team that went 22-12 overall.

The 1979-80 season was one of the “what could have been” seasons in the history of the program. The Hoosiers entered the season with a preseason #1 rank and were a favorite to a win the NCAA title. With heralded newcomer Isiah Thomas added into the mix with returnees Mike Woodson, Randy Wittman, Ray Tolbert, and Landon Turner, the Hoosiers were anticipating hanging banner number four in Assembly Hall.

Turner’s production was expected to increase during his sophomore campaign, especially after the loss of Wittman (foot injury during the Kentucky game) and Woodson (who would need back surgery after struggling to play during through Toledo game).

With Indiana down two key players, the outlook against their next opponent on December 22, North Carolina, was bleak. The Hoosiers gave everything they had, but fell 61-57. Turner, coming off the bench, had his best performance of the season with 13 points and six rebounds.

Despite having the ability to make impacts in games throughout the 1979-80 season, Knight was becoming frustrated with Turner’s lackadaisical approach on the court — and even more so, in the classroom. Turner himself, in a 20/20 interview that aired in the early 1990s, admitted that his attitude toward studying and classes was not where it should have been during most of his IU career.

A fan following the team during Turner’s sophomore season may have seen the potential there for stellar play, such as when Turner held Purdue big man Joe Barry Carroll to only 11 points in IU’s 69-58 win on January 26, 1980. That same fan, however, would see how prone to foul trouble Turner could be throughout Big Ten play.

All in all, in one of the most memorable seasons in IU history — when the Hoosiers overcame major injury setbacks en route to a Big Ten title — Turner’s overall production continued to increase (7.4 ppg and 4.4 rpg). Still, Knight felt that Turner had yet to reach the potential that he had hoped for his 6’10” big man.

As Hoosier fans, most of us know the story of how the 1980-81 season began. A 7-5 record through 12 games was, well, both surprising and concerning. And through Indiana’s ups and downs, there remained the inconsistency of now-junior Landon Turner.

Jim Crews, an Indiana assistant coach at the time, described Turner in stating, “He could be the most enjoyable player to coach and then the most frustrating.” Turner scored 15 points in a loss to Kentucky, 23 in a loss to Notre Dame, and 23 in a win over Baylor. Despite his ability to show his gifted talent on the floor, by the time Big Ten played rolled around, Turner once again seemed lost and in Knight’s doghouse.

Teammate Ray Tolbert would later say that Turner’s frustration at times with Knight had led him to the point of considering quitting the team. In the early part of conference play, Knight would have most likely been in agreement with this, and as a result, essentially gave Turner an ultimatum that he needed to take ownership of his play. Turner must have received the message loud and clear, as he played a pivotal role in Indiana’s dominant play in their last five Big Ten games — winning by an average of 13 points en route to defending as Big Ten champions.

Knight specifically commented on Turner’s change following their win over Ohio State: “Turner has made great strides in that it upsets him to make mistakes. When it upsets a player to make mistakes, he’s come a long way toward becoming a better player.”

Indiana’s 21-9 overall record awarded them a 3-seed in the Mideast Regional. If the Hoosiers could get by their first round opponent, Maryland, they would be awarded with playing essentially a home game, as IU’s Assembly Hall was a regional host site.

The Terrapins proved to be no match for Indiana and the now nearly unstoppable Landon Turner as IU cruised to a 99-64 win with Turner scoring 20 points. Indiana would once again dominate its next two opponents on their home court with victories over Alabama-Birmingham and St. Joseph’s (PA), the latter of which had upset Boston College to reach Indiana in the regional final. Landon Turner would lead all IU scorers with 14 in the St. Joe’s victory, which would propel IU to the Final Four in Philadelphia, an accomplishment considered improbable with the start of the season.

With Turner in sync, Indiana continued to look unstoppable. In their semi-final matchup against LSU, the Hoosiers rolled to a 67-49 win behind Turner’s 20 points, earning MVP honors in the semi-final game. A Monday night showdown with North Carolina, who defeated the Hoosiers earlier in the season in Bloomington, stood in the way for Indiana to clinch its fourth overall NCAA title.

Sophomore Isiah Thomas dominated the contest, leading the Hoosiers with 23 points en route to a 63-50 win. Turner added 12 points and 6 rebounds. In reflecting on the victory, coach Bob Knight stated, “I’ve never seen a group of kids stay with a goal or work harder toward an end they had set for themselves. Never losing sight of the fact that they had to improve.”

One could argue that the message emphasized the massive turnaround of Landon Turner, and how he found himself at the right time during the season to help dictate the success the Hoosiers would find. Isiah Thomas, reflecting on that faithful season years later, stated that without Turner’s play, the Hoosiers never would have won their title in ’81.

At the conclusion of the 1980-81 season, major changes were ahead with Indiana’s roster. Not only would four seniors be departing (Ray Tolbert, Steve Risley, Phil Isenbarger, and Glen Grunwald), but star sophomore guard Isiah Thomas would be leaving Indiana after two seasons for the NBA.

When Bob Knight sat down with Turner at season’s end to begin preparations for the 1981-82 season, one could assume that his message for his rising senior was clear: I need you to be the leader of this team. In addition to evaluating his upcoming senior year, many around the country began assessing Turner’s potential as a star at the professional level.

The sky was the limit for Turner.

Unfortunately, Turner’s future as a basketball player, and his life altogether, would take a drastic turn on July 26, 1981.

While en route to King’s Island with a group of friends, Turner lost control of his vehicle and crashed, leaving him paralyzed from the neck down. It was a devastating, cruel blow to a young man’s promising future at Indiana and beyond.

When Bob Knight called Turner’s parents to discuss his condition following accident, Knight was at a loss of words, a rare occurrence for The General. 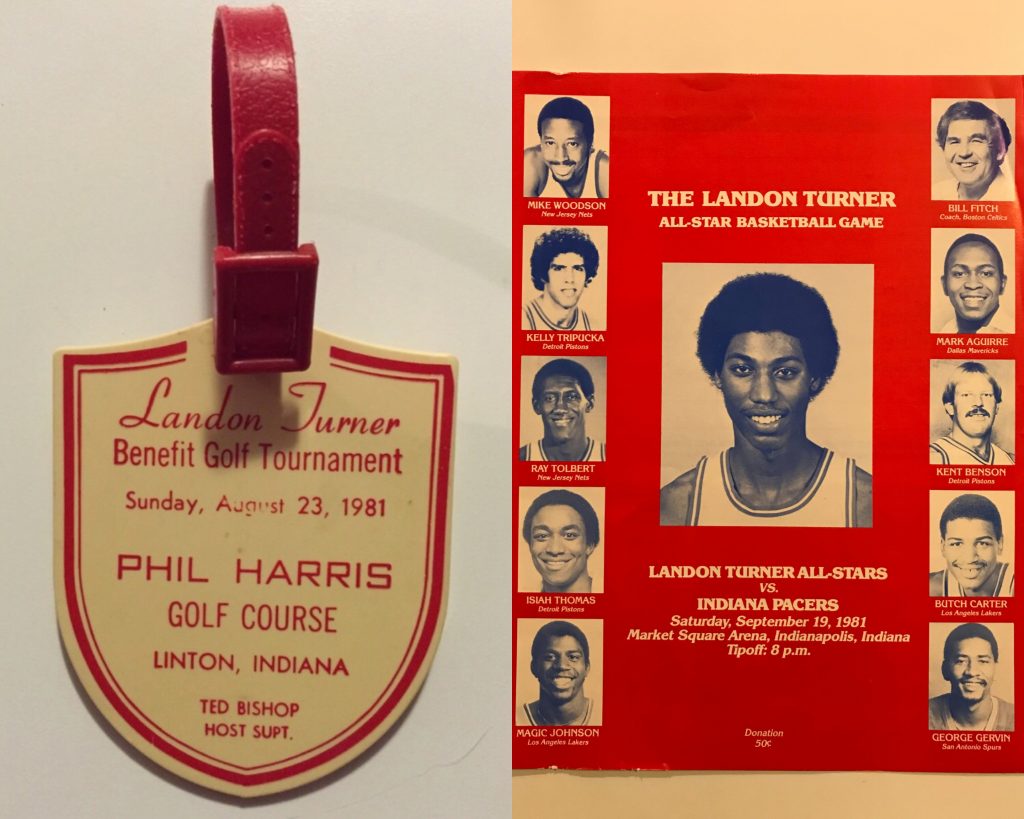 Support from all over the state would pour in following Turner’s car accident that would leave him paralyzed. Over $500,000 would be raised.

Even if Knight was speechless concerning his 6’10” center’s condition, he knew that his actions would speak volumes in assisting Turner however possible. Fundraisers and events all over the state of Indiana occurred in the fall of 1981 and beyond that would raise over $500,000 for assisting Turner moving forward.

In a true show of class, knowing Turner’s basketball career was over, the Boston Celtics selected Turner in the 10th round of the 1981 NBA Draft.

Despite not being able to be in the floor directly, Turner would never be a stranger to the IU program.  To this day, he’s a regular in the IU locker room, a fixture on the sidelines on for IU games, and a true symbol of perseverance.