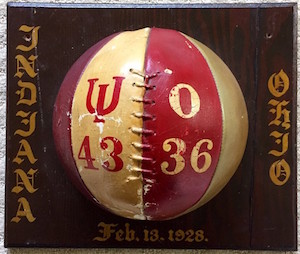 If you were a student at Indiana University any time from the 1960’s-1980’s, you might recall seeing football and basketball plaques hanging in the Indiana Memorial Union Commons.

The next time you watch “Breaking Away,” pay close attention to the fight scene that takes place in the IMU between the “Cutters” and IU students, as some of the plaques will be visible above the entrance to the bowling alley.

The Indiana University Athletic Department would create game ball plaques all the way through the late 1930’s by taking the actual football or basketball used in an IU victory, deflating it, painting it in the school colors of IU and their opponent, and then mounting it for prominent display.

Originally, these relics would be on display in the “Trophy Room,” which was located upstairs in the original Men’s Gymnasium (now part of the IU School of Public Health). After the balls were removed from the IMU, they would remain in the possession of Indiana University, with some eventually being displayed at the Gables Restaurant (now Buffa Louies).

Over the years, some have made their way to online auctions, but the location of many remain unknown. Painted IU game ball baseballs are extremely rare, and have only shown up twice in online auctions in the last 15+ years.

The 1928 Indiana vs Ohio (referring to THE Ohio State University, not Ohio University) is a special piece of IU history, as it comes during the Everett Dean coaching era, and the Branch McCracken playing era.

McCracken was a first-year player as a sophomore during the 1927-28 season (freshmen students would not be eligible to participate in collegiate football or basketball until early 1970s) and made an immediate impact. Behind McCracken’s team-leading average of 10.1 ppg, Indiana would go on to clinch a share of the Big Ten title, their second overall in the program’s history.

In this particular game, McCracken would score 11 points in the victory, behind only Bob Correll and Jim Strickland with 12 points each.