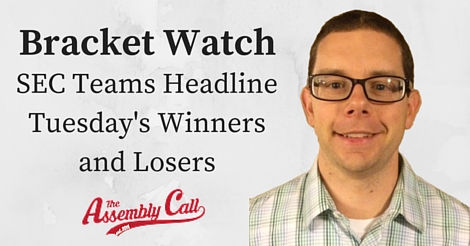 Tuesday night’s slate proved to be pretty uninspiring, but a handful of winners and losers emerged, primarily from the SEC.

The Wildcats are continuing to climb the seed list after blowing out Alabama at home. They’ve won five of their last six games, with all of the victories coming by double digits.

Kentucky now has 11 Top 100 wins and is pushing toward the three line with road games against Vanderbilt and Florida up next.

Guard Pat Birt continued his recent scoring binge with 23 points in a 19-point win over conference-leading Temple. While it isn’t quite a Top 50 win, it does move the Golden Hurricane to 7-8 against the Top 100.

They finish the regular season with winnable games at Memphis and home against South Florida, and a pair of wins would like position them inside the field heading into the AAC Tournament.

The Commodores aren’t dead yet after winning at the O-Dome to complete a season sweep of Florida. Vandy is 9-3 in its last 12 SEC games, with five Top 50-ish wins.

A pair of sub-100 losses are working against the ‘Dores, but they have a huge opportunity to pick up a marquee win when Kentucky comes to town on Saturday. For now, they’re on the outside looking in.

What a difference a week makes. After knocking off LSU last Wednesday, the Crimson Tide had won five straight and were starting to get some breathing room. But after an ugly home loss to Mississippi State and a drubbing at the hands of Kentucky, Alabama is just 6-9 against the Top 100 with two sub-100 losses.

They now sit firmly on the bubble, and their remaining games (Auburn, Arkansas, at Georgia) are ones they can’t afford to lose.

Tuesday’s home loss to Vandy leaves the Gators at 1-3 in their last four games. Perhaps most importantly, Florida has just two wins against the Top 50, and outside of those wins over Saint Joseph’s and West Virginia, there isn’t much on the profile.

The Gators are now 2-7 against the Top 50 and 7-10 versus the Top 100, and they can ill afford to lose on the road against a reeling LSU squad this weekend.

Speaking of the Tigers, Tuesday’s beatdown at Arkansas all but ends the discussion of LSU as an at-large contender. And if that means we won’t need to hear about or discuss their chances anymore, I’ll consider it a win.

The Owls were an intriguing bubble contender last season, and they seem headed that way again this year. Losing at Tulsa certainly doesn’t qualify as a bad loss, but Temple is now a mere 7-9 against the Top 200 with a sub-200 loss at East Carolina as well.

While the Owls have picked up four Top 40 victories in league play, they have zero non-conference wins over the Top 200. They have to close out the regular season with three wins against Central Florida, Memphis and Tulane on the schedule.