You are here: Home / Library / Better Than Advertised: The Story of the 2015-16 Indiana Hoosiers 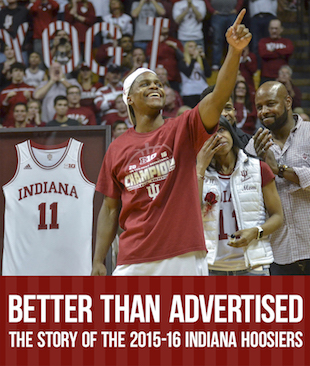 The 2015-16 Indiana mens’ basketball season was a season of moments.

This book is your portal to reliving them all.

The Indiana Hoosiers men’s basketball team entered the 2015-16 season with great expectations. But the season was soon in shambles after a miserable trip to Maui and a pathetic loss at Duke in early December.

A remarkable comeback against Notre Dame would come soon thereafter, followed by an impressive run through the Big Ten regular season that saw the Hoosiers capture the outright title by two games.

Though many people left these Hoosiers for dead in Durham, this group of Hoosiers never stopped believing, never stopped working, and finally started defending with some purpose. As a result, they started winning … often, and in impressive fashion.

The Hoosiers finished the regular season on a 20-3 stretch after that ignominious Duke loss, capturing the school’s 22nd Big Ten Championship. The Hoosiers would also defeat hated rival Kentucky in an epic Round of 32 battle.

Yogi Ferrell broke Indiana’s all-time assists record and joined the annals of IU legends along the way. Tom Crean, was named Big Ten Coach of the Year, a well-deserved honor given where the Hoosiers were and where they ended up.

And along the way, numerous other storylines emerged — which is what made this one of the most memorable seasons of Indiana basketball in recent memory.

Better Than Advertised: The Story of the 2015-16 Indiana Hoosiers is an anthology of this remarkable season, as told by the hosts of The Assembly Call IU Postgame Show.

The season spanned 37 total games, each providing its own unique contribution to the tapestry of the Hoosiers’ overall body of work. This book goes game-by-game, taking you back to the thoughts and feelings, the excitement and doubt, that smart, passionate IU fans were feeling as the season unfolded.

By ordering our book, you will not only be getting a copy for yourself, you’ll also be supporting The Assembly Call (the proceeds will help us recoup the expense of getting the book printed), and help convince Amazon to keep it in stock so other IU fans are able to get their copies too.

<!--- <h2>Here's the special pre-order offer Pre-orders make a huge difference! Not only do they dictate where the book will rank when folks search for IU-related books, but the more books we get pre-ordered, the more Amazon will keep in stock, and the more IU fans hands we'll be able to get the book into. We created the paperback version of the book so that IU fans who felt a special bond with the 2015-16 team could order it and have a special, physical keepsake to refer to anytime they want to be transported back to ...

Or any other of the many, many special moments last season brought. (I have a book like this for the 1993 team, and it's among my more cherished possessions.) By ordering, you will not only be getting a copy for yourself, you'll also be supporting The Assembly Call (the proceeds will help us recoup the expense of getting the book printed), and making sure other IU fans are able to get their copies too. So please consider picking up your copy! And if you choose to order during the pre-order period, even better. If you decide to pick up more than one copy during the pre-order period -- one for yourself and then additional copies to give away to friends -- we want to reward you. All you have to do is send me a screenshot of your receipt. Here's how the rewards will be tiered:

You can co-host an episode of The Assembly Call with us next season* -- or, grant your spot to someone else who you think would want to be on the show.. * - BTW, we do reserve the right to take this offer away if we find any reason to believe you're actually just a desperate UK or Purdue fan who would buy 20 copies to infiltrate a rival's show. 🙂

You can be a guest on an offseason episode of The Assembly Call and share your favorite IU hoops stories -- or, grant your spot to someone else who you think would want to be on the show.

I will send you an official Assembly Call logo coaster, made out of durable limestone. (Glasses don't stick to it!)

You can sponsor/dedicate one Banner Moment during a postgame show next season. You pick the game. First come, first serve. You'll just need to send me your dedication ahead of time. It can be 25-30 seconds.

We'll send you a thank you note, with an official Assembly Call laptop sticker enclosed. Pretty simple. Click here to pre-order your copy on Amazon ---!> If you have any questions, just shoot me an email: jerod@assemblycall.com. Can't wait for you to get your copy!