In the second episode of The Inside Scoop with Tamar Bates presented by Speakeasy Sales Copy, we have a special guest.

It’s the person who knows Tamar, and his game, better than anyone.

So we take an entertaining trip down memory lane to get the best stories from their earliest days playing one-on-one, to teaming up for a state title in high school, to their goals of one day playing together again.

One of the most insightful sections of the conversation occurs when Trey gives his own scouting report on Tamar. If he was Tamar’s coach, what would he run to set him up for success? And on the flip side, if he was coaching against Tamar, what would he do to frustrate him? The answers are pretty telling for the kind of player we’re likely to see this season in the Cream and Crimson.

And while there is plenty of love and appreciation directed at their father, there also is some trash talk too … which means we may need to get him on a future episode to defend himself (since he apparently couldn’t defend Trey).

All of that and much more on Episode 2 of The Inside Scoop.

Speakeasy Sales copy was founded in 2020 by award-winning copywriter Clay Manley, formerly the “voice of Petco.” After years of watching entrepreneurs suffer from mediocre copy, Clay now helps them turn their words into leads, sales, and loyalty by leveraging the billion-dollar secrets he uncovered writing for the world’s biggest brands.

Or watch the video:

END_OF_DOCUMENT_TOKEN_TO_BE_REPLACED

This week on AC Radio, one of our favorite recurring guests hosts is here: Chris Williams aka @IUArtifacts.

Chris has some of his most prized Mike Woodson memorabilia possessions (well, all except for one) to show us and share the stories behind. We all know how amazing Mike Woodson’s career at Indiana was, but it’s still fun to linger on some of the incredible details, and to lament his few missing accomplishments — one in particular that he undoubtedly hopes to achieve now as coach.

In addition, Coach shares his takeaways from being at Big Ten Media Day, the guys run through some Hoosier Headlines, and then they answer your questions — including one about which home games should be the favorites in a ticket draft.

All of that and more this week on Assembly Call Radio.

On the mics: Coach and IUArtifacts

END_OF_DOCUMENT_TOKEN_TO_BE_REPLACED

This week on AC Radio, we focus on the Big Ten conference with Big Ten Media Day occurring and the “official unofficial” Big Ten media poll recently being released. What do we make of the Big Ten this season? And what bold predictions are we willing to go on record with?

Also, we make a special announcement about a new content partnership that will take our private discussion community to the next level. Learn more at assemblycall.com/community

Plus, as always, answers to community member questions.

On the mics: Jerod (hosting again!), Ryan, and Coach Adragna

END_OF_DOCUMENT_TOKEN_TO_BE_REPLACED

In the first episode of The Inside Scoop with Tamar Bates presented by Speakeasy Sales Copy, Jerod and Tamar lay out their goals for the show and dig into Tamar’s offseason transition to Bloomington.

Among the topics discussed:

• How the show came about
• What they want fans to take away from the series
• How Tamar reacts when his coaches and teammates call him “cocky.”
• His relationship with Rob Phinisee (and how Rob is looking offensively)
• The impact of Clif Marshall
• His impression of what’s different this year compared to before his arrival
• The lessons learned and confidence gained from the Bahamas trip
• The early leader for his favorite restaurant in Bloomington
• What he and his family will be doing before and during Hoosier Hysteria
• His goals for his freshman season — team and personal

Speakeasy Sales copy was founded in 2020 by award-winning copywriter Clay Manley, formerly the “voice of Petco.” After years of watching entrepreneurs suffer from mediocre copy, Clay now helps them turn their words into leads, sales, and loyalty by leveraging the billion-dollar secrets he uncovered writing for the world’s biggest brands.

Or watch the video:

END_OF_DOCUMENT_TOKEN_TO_BE_REPLACED

For years, college athletes have faced restrictions due to NCAA rules and regulations. That all changed this off-season thanks to new Name, Image, Likeness (NIL) rules that now allow athletes to engage with fans and sponsors in new and unprecedented ways.

Hoosier fans will get a taste of that starting next week as 5-star freshman Tamar “Scoop” Bates is taking his talents from Assembly Hall’s Branch McCracken Court to The Assembly Call airwaves for a one-of-a-kind, 20-episode podcast series during the team’s much-anticipated 2021-2022 basketball season. (Click here to subscribe to The Assembly Call.) 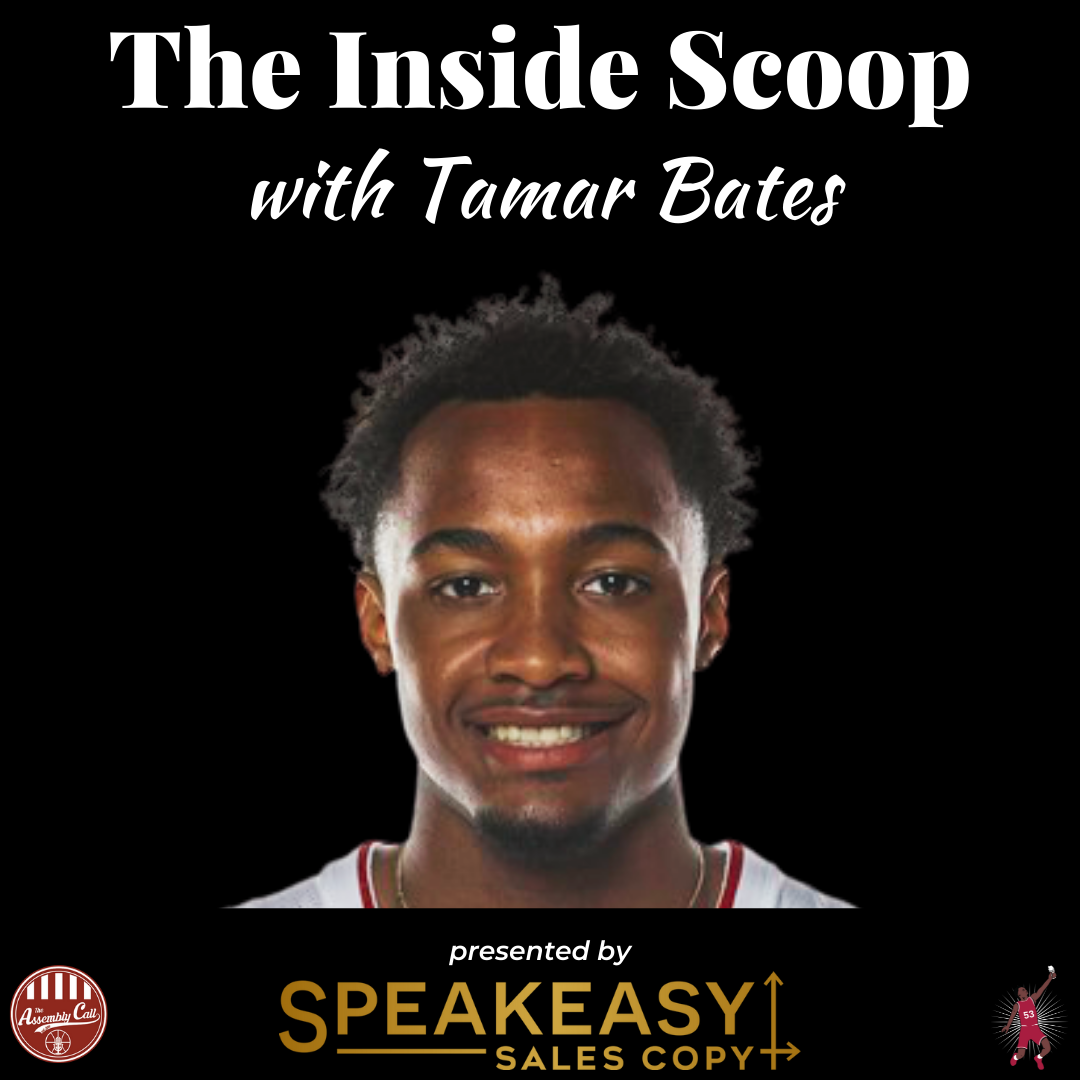 The show, which will give listeners an inside look at what it’s like to be a freshman basketball player lacing up for a first-year head coach at a hoops-crazy school, is called “The Inside Scoop with Tamar Bates,” an ode to Tamar’s nickname, Scoop.

This is the first time an active Indiana University basketball player will be giving fans a detailed account of his experience on and off the court during the season.

“The new NIL rules provide a fan podcast like ours with opportunities we’ve never had before,” said Assembly Call host and co-founder Jerod Morris. “To be able to arrange a regular interview series that will be entertaining and insightful for our audience, while also being able to compensate the athlete for his time and energy, is really a no-brainer that we were excited to pursue.”

“We’ve had other recurring guests in the past, who we paid an appearance fee to,” Morris continued. “So it’s only fair that an athlete like Tamar, who will have to juggle this commitment with all of his other commitments, gets paid too.”

“I’m excited to have this opportunity to let IU fans get to know me and my family, and also provide insight on our season,” Bates said. “At the same time, I feel fortunate to be arriving on campus at this time, with opportunities like these now available to college athletes. It’s been a long time coming.”

The first episode tips off Wednesday, September 29th, just in time for Hoosier Hysteria, and Speakeasy Sales Copy has signed on as the presenting sponsor.

“I’m an IU grad, I’ve listened to The Assembly Call for a long time, and I have high hopes for Tamar as a player and representative of Indiana University. So I jumped at the opportunity to be the presenting sponsor for this first-of-its-kind series,” Speakeasy Sales Copy founder, Clay Manley, explained.

“This is the kind of insider access I’ve always wished for as a Hoosier fan. I’m thrilled to support the program and athletes like Tamar in this way, while giving fellow fans even more to cheer about this season.”

Catch the first episode of the 20-episode series on Wednesday September 29th to experience firsthand the trials and tribulations of a budding star chasing a national championship while playing for a former NBA standout at one of the nation’s premier basketball schools.

The episode will be posted to The Assembly Call podcast feed and YouTube channel on September 29th, ahead of Indiana’s Hoosier Hysteria on October 2nd.

Tamar “Scoop” Bates is a freshman basketball player at Indiana University. He is originally from Kansas City, Kansas where he led Piper High School to a state championship as a sophomore, and then as a junior was named Kansas All-Classes Player of the Year. He played his senior year at IMG Academy. Bates was named to the Jordan Brand Classic roster and earned a 5-star recruiting ranking.

About The Assembly Call

The Assembly Call is the longest-running podcast dedicated to Indiana basketball. Launched at the beginning of the 2011-12 season by Jerod Morris, Ryan Phillips, and Andy Bottoms, the show is entering its 11th season covering IU basketball. The regular programming schedule features postgame shows that go live online immediately following every game, along with a weekly show on Thursday nights. The Assembly Call also hosts a weekly email newsletter and private discussion community for thousands of IU fans.

Speakeasy Sales Copy was created in 2020 by award-winning copywriter and copy coach, Clay Manley, who has worked with brands like Petco, Marvel, Slim Jim, and more. After years of watching entrepreneurs and small business owners suffer from mediocre copy, Clay now helps them turn their words into leads, sales, and loyalty by leveraging the billion-dollar secrets he uncovered writing for the world’s biggest brands.

Rob Phinisee has had an interesting, and in may ways contradictory, three years in Bloomington.

It hasn’t really made a lot of sense.

But what does seem to make sense, at least IU fans hope, is that Rob and the entire IU program will have a chance to be reborn under the direction of a new staff and with a rebuilt roster.

In this wide-ranging conversation with Rob we discuss the many contradictory elements of his time at IU and look forward to what his fourth season may bring. Among the topics we get into:

And so much more. We cover a ton while reliving some of his most memorable moments as a Hoosier.