You are here: Home / Commentary / All Indiana Needs From Al Durham is What He’s Already Shown Us He Can Be 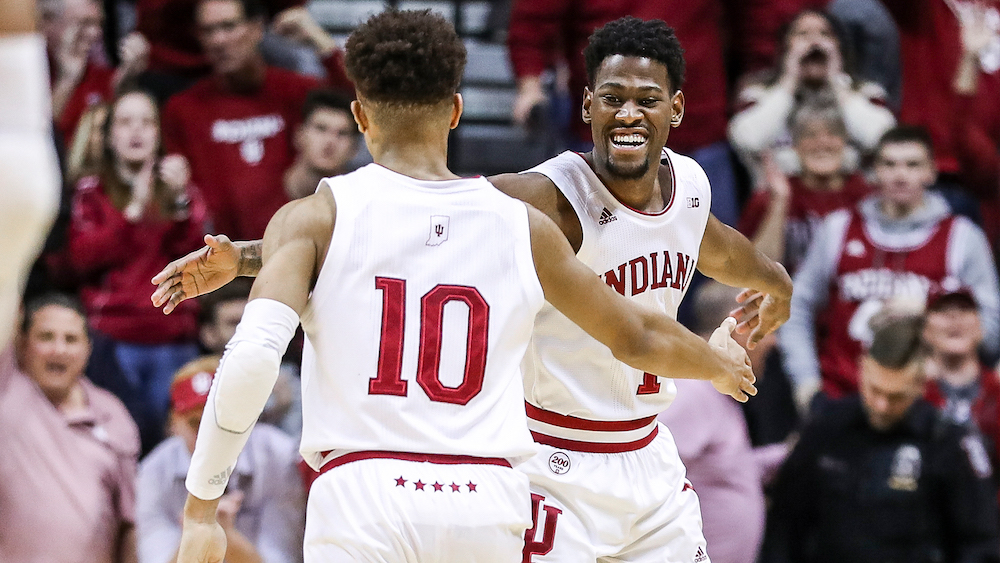 Coming into this season, I said that Al Durham was Indiana’s second-most indispensable player behind Trayce Jackson-Davis.

Not Indiana’s second-best player, but it’s second-most indispensable player — thanks to the Hoosiers’ dearth of reliable perimeter scoring beyond him.

The first nine games of the 2020-21 season have changed that somewhat.

Race Thompson is now Indiana’s clear #2 given how Joey Brunk’s injury, Justin Smith’s departure, and Jerome Hunter’s struggles at the 4 have demolished the frontcourt depth. Indiana simply cannot absorb any injury, ineffectiveness, or foul trouble from its big man combo.

And Armaan Franklin’s emergence as a higher-usage, sharp-shooting scoring threat has been a pleasant and absolutely necessary surprise. Is it here to stay? The 50% shooting from deep surely is not, but the acceptable efficiency on 22% usage probably is, with plenty of room still to grow.

Yet even with Race’s improvement and Armaan’s emergence, Indiana remains just 3-4 against top-100 competition, with an offensive efficiency wallowing in the 50s nationally and 12th in the conference through two frustrating losses.

There are number of reasons for this, but the #1 reason is that Al Durham … just hasn’t been Al Durham.

And if Indiana is going to snap out of this 0-2 conference funk and make good on its still-high computer rankings (#23 in KenPom, #18 in Torvik), the Hoosiers have to get more out of their senior guard.

Why Al is the key to improved offensive production

Now, you may be wondering why I’m singling out Al here instead of Rob Phinisee.

And while improvement from both Rob and Al would nice, asking Rob to be better offensively is asking for something we haven’t actually seen him do.

Yes, Rob can theoretically be better (it’s always theoretical with Rob, isn’t it?), and he surely will be in fits and spurts as the season progresses, but we’ve never seen consistent offensive production from him. So I’ll appreciate the strong defense and enjoy any improved offense if it comes, but I’m not expecting it.

Al, on the other hand, showed us over an extended stretch of play last season how productive he can be offensively.

And just that same level of production that he’s already shown, even without any improvement at all, is the difference between Indiana having an offense that isn’t good enough to win Big Ten games and one that can actually capitalize on the Hoosiers’ improved defense.

The math here is pretty simple.

If Al had simply reproduced his roughly 12-point production from the back half of conference play last season, Indiana wins both games. He had the opportunities, he just didn’t seize them.

Look at Indiana’s most recent game against Illinois. Al did nothing in the first half, but finally got going in the second half. Unfortunately, his overall line was inefficient and not enough: 9 points on 4-12 shooting, including 1-5 from downtown, and no free throws.

Perhaps a better line from Al doesn’t win that game for Indiana, but it gives the Hoosiers a better chance down the stretch … as Al did last year at Illinois when he produced 13 points on 3-6 shooting and 5-5 from the line in a one-point loss.

Inside the numbers: where Al is struggling most this season

Al’s inefficient shooting and lack of free throw production in this year’s Illinois game really is a microcosm of his disappointing offensive struggles as a senior.

As a junior in Big Ten play, Al shot 39.0% from 3-point range. He was also second in the conference in Free Throw Rate (FTA/FGA) at 59.2% while making 82.4% of his free throws. This is a uniquely efficient statistical profile that made Al an excellent wing accoutrement for Trayce Jackson-Davis.

But through the eight games he’s played this season, Al’s shooting and scoring numbers are down in almost every category — and that’s with two games against sub-250 competition included in the mix.

Al is shooting just 25.8% from downtown, with many of the misses being of the left/right variety instead of long/short, a sure sign that a shooter is struggling with his mechanics, his confidence, or both.

Just as concerning is that Al is only getting to the free throw line at a career-low 30.3% clip (FTA/FGA), and he’s only making 60% of his free throws once he gets there.

Al is a 75.4% free throw shooter and a 33.9% 3-point shooter for his career. He has a long track record of acceptable efficiency in these two areas. So it’s clear that something is very, very off right now mechanically or mentally.

Yet it’s not all bad.

Despite what the eye test may lead you to reasonably assume, Al is actually turning in career highs in rebounding percentage, assist rate, and turnover rate. And his 2-point field goal percentage (48.6%) is actually higher than his career rate (47.9%).

The bottom line is that Al’s struggles this season boil down to the fact that his two most reliable offensive abilities — hitting outside shots and making efficient use of the free throw line — are failing him. That’s why his struggles have been so hard to watch. We’ve seen him do the things he’s failing to do this season.

And, fair or not, it’s costing Indiana wins.

It’s also leading to reasonable questions about Al’s role on the team because, simply put, he has to be producing points to be worth playing.

What should Al’s role be moving forward?

We all know that Al is a player with limited abilities. He’s subpar defensively and he’s not going to be the primary creator offense for others very often. That’s why he was the 230th-ranked recruit in his class.

And it’s why the possessions with Al running point have been so maddening. I don’t blame him for this, of course. I just wonder what the coaches are thinking.

Literally any ball-handler we have is a better option than Al for initiating the offense because he’s not adept at it and makes poor decisions. Plus, more to the point, it takes away from what he does best, which is being either a) a spot-up wing who can make shots and attack closeouts, or b) someone who can come off screens, catch, and attack downhill.

My plea to Indiana’s staff would be to let Al play to his limited but important strengths. If you can’t figure out an answer at point guard with your 4-star junior and 5-star freshman, I guarantee you the 3-star scoring guard isn’t the answer.

Al has proven that in the right role he can produce points for himself by hitting 3s and getting to the free throw line, all while helping to spread the floor for Trayce and Race inside. Indiana has one other guy doing that right now in Armaan Franklin. The offense would look a whole lot better with a second guy doing it, which is why Al’s immediate improvement is so important.

And it’s fair to hold out some realistic hope that such improvement will come. We’ve seen reliable sources of perimeter offense struggle as seniors before. In recent seasons, both Robert Johnson and Nick Zeisloft struggled at the start of Big Ten play during their final seasons before getting back to being their old selves.

That’s all Indiana needs from Al Durham now: for him to simply do what he’s already shown he can do. They just need last year’s Al Durham to start showing up for this year’s team.