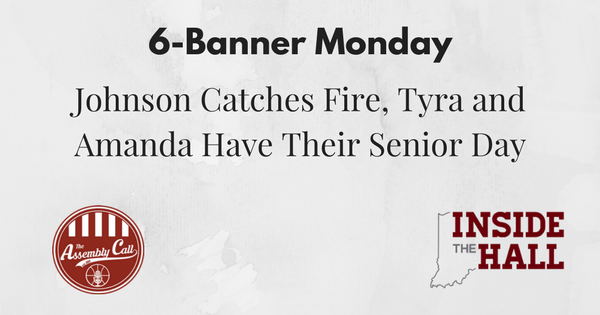 Welcome to another edition of 6-Banner Monday, where we highlight the six most essential IU basketball stories of the past week.
Indiana’s winning streak doubled from two to four last week, as the Hoosiers took down Illinois and Iowa. But let’s not forget the women’s squad, which celebrated the final home game for seniors Tyra Buss and Amanda Cahill.
In this week’s edition:

Robert Johnson had the game of his life on Saturday afternoon. With Juwan Morgan hampered with foul trouble, the senior picked up the slack, leading Indiana to an 84-82 road win.
The Hoosiers looked to be in deep trouble early on, as Iowa made their first 10 shots from the field to take a 13-point first half lead.
But before long, Robert Johnson put the squad on his back. He scored a career-high 29 points and tied a program record by hitting nine 3s against the Hawkeyes.
It wasn’t just Johnson that was instrumental to the victory. Freddie McSwain and Devonte Green both played major roles, and combined for the winning score on a beautifully executed pick-and-roll in the final minute.
The win brings the Hoosiers’ record to 16-12 overall, and 9-7 in the Big Ten. There is now a real possibility of postseason ball beyond the Big Ten Tournament, where Indiana is now guaranteed no worse than the No. 7 seed.
Content from Iowa City:

The Assembly Call is proudly supported by SeatGeek — the ticket search engine that makes finding tickets to sporting events, concerts, and many other live events a cinch.
Click here to browse the best prices for IU basketball tickets.
If you’re interested in going to these upcoming Indiana home games, tickets remain available:

Remember: add our promo code ASSEMBLY to your SeatGeek account to receive a $20 rebate on your first purchase.
The links in this section are affiliate links, meaning we earn a commission if you click on them and purchase tickets. This makes it a great way to get the best prices on tickets and support The Assembly Call at the same time. Thank you!

The first several banners each week are usually reserved for the men’s team, but today we make an exception.
That’s because on Saturday afternoon, seniors Tyra Buss and Amanda Cahill played their last regular season game at Assembly Hall.
The duo are unquestionably two of the best players in program history, taking the Hoosiers to heights they hadn’t seen in years. Tyra Buss is already well over 2,000 career points, while Cahill has over 1,000 points and rebounds herself.
Not only were they honored on Saturday, but they put on a show. Buss put up an insane 37 points, while Cahill recorded a double-double as they won their seventh straight.
For the Hoosier Network, Josh Eastern has more on the iconic tandem:

When Moren arrived in Bloomington four years ago, both Cahill and Buss were faced with a dilemma. They were entering their freshman season with a coach that didn’t recruit them. It was something they both mentioned in the videos they narrated postgame.
As the story goes, they stuck it out in Bloomington. It seems to have worked out for all parties involved.
“I can speak for Amanda about this too, we’ve worked extremely hard for this,” Buss said. “We’ve played every single game together since our freshman year and you can tell we’ve grown each year and gotten better each year.”

More on Buss and Cahill:

The Indiana high school basketball regular season is almost complete, and Romeo Langford is inching ever closer to Damon Bailey’s career scoring record.
As luck would have it, at Langford’s senior night in New Albany on Friday, Bailey was on the opposite bench as an assistant coach.
Kyle Neddenriep of The Indianapolis Star adds context to the coincidence:

Bailey was remarkably consistent during his senior season. He averaged 31.3 points in 1989-90 with a high of 42 points. Over 110 games in his four-year career, Bailey averaged 28.4 points per game.
“From everything I’ve heard about Romeo and seen, he plays the game the right way,” Bailey said. “He’s unselfish, he gives the ball up when he’s double-teamed and doesn’t get caught up in the hoopla. He goes on to the next game. I know he’s had some terrific games lately from a point total. But if that record was all I cared about, we wouldn’t even be talking about it. And if it was something that he really cared about, he would have broken it already.”

Langford scored 25 points as he led the Bulldogs to a senior night win. With one regular season game and the postseason to go, he is 329 points shy of Bailey’s record. Given New Albany’s bye in the sectional draw, he would have to average something like 47 points per game to do it — so it’s unlikely.
Then again, it’s Romeo. So rule nothing out.

There was no shortage of former Hoosiers taking part in this weekend’s NBA All-Star festivities in Los Angeles.
Eric Gordon of the Houston Rockets attempted to defend his three-point contest crown, but fell well short and was eliminated in the first round.
Meanwhile, Victor Oladipo was a participant in several events. On Saturday, the Pacers star competed in the dunk contest. Although he didn’t make the final round, his dunk while wearing a Black Panther mask was quite impressive.
The next day, Oladipo took part in the All-Star game for the first time in his career. Oladipo played 15 minutes, finishing with seven points, two rebounds, three assists, three steals and one sweet dunk. I have a feeling he’ll be in this event again in the years to come.

Get authentic Indiana apparel and merchandise from the Official IU Online Store. Shop licensed Hoosiers shirts, hats, hoodies, and Indiana accessories, including youth gear, to find the perfect gift for any fan … or yourself.
For quick access in the future, bookmark this URL:

The links in this section are affiliate links, meaning we earn a commission if you click on them and make a purchase. This makes it a great way to get great IU gear and support The Assembly Call at the same time. Thank you!

What’s up with student attendance?

If you were at IU’s win over Illinois on Wednesday, you may have noticed something in the student section. Or rather, a lack of something: students.
It wasn’t the first time this season this has happened, but it was the most glaring. Riding a two-game winning streak, the lower level student section wasn’t even half-full at tip-off. Long-time fans were upset, disappointed, and even embarrassed.
So, why the lack of student enthusiasm?
There are many factors behind lagging student attendance. A down Big Ten, weird scheduling, and student conflicts are some of them.
On the latest CrimsonCast, Galen Clavio and Chronic Hoosier broke it all down and provided essential context about the issue — why it’s occurring, why it’s not just an IU issue, and why it actually might not be as big of a problem as some are making it out to be.
Give it a listen.

With the regular season winding down, the IHSAA released the draws for sectionals on Sunday night. Here are the notable news surrounding the draw when it comes to IU commits and targets (info via Kyle Neddenriep of The Indianapolis Star):

And with that, the joy of hanging Banner #6 is now one week closer.
Thanks for your continued support for The Assembly Call. We’ll be back next weekend with a new roundup.
Now go enjoy yourself a 6-banner Monday.