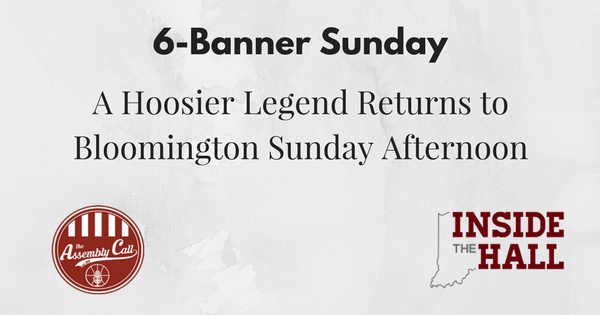 Welcome to another edition of 6-Banner Sunday, where we highlight the six most essential IU basketball stories of the past week.
Despite losing De’Ron Davis for the season, the team has shown improvement in wins over Minnesota and Penn State. And Simon-Skjodt Assembly Hall will welcome an IU legend on Sunday afternoon … he’ll just be on the opposite bench.
In this week’s edition:

The Hoosiers picked up their second consecutive conference win, defeating the Nittany Lions, 74-70, on Tuesday evening at Assembly Hall.
It was an all-around effort from Indiana, with five players scoring in double-figures, led by Juwan Morgan’s 21. Despite another poor shooting performance from beyond the arc (6-of-27), Indiana controlled the battle on the boards and only turned the ball over nine times. As with seemingly all meetings in recent years between these two squads, the ending was too close for comfort when Penn State hit several desperation threes late, but time simply ran out on the Nittany Lions.
After the win, Archie Miller praised his team’s ability to come out with the win despite an imperfect showing:

We weren’t great, by any stretch of the imagination. But guys were locked in, playing to win. I think we had a good mindset in terms of that and we’ve got to keep growing.

The Assembly Call is proudly supported by SeatGeek — the ticket search engine that makes finding tickets to sporting events, concerts, and many other live events a cinch.
Click here to browse the best prices for IU basketball tickets.
If you’re interested in going to these upcoming Indiana games, inexpensive tickets remain available:

Remember: add our promo code ASSEMBLY to your SeatGeek account to receive a $20 rebate on your first purchase.
The links in this section are affiliate links, meaning we earn a commission if you click on them and purchase tickets. This makes it a great way to get the best prices on tickets and support The Assembly Call at the same time. Thank you!

Davis out for the year

On Wednesday afternoon, IU athletics published a press release stating that sophomore De’Ron Davis will miss the rest of the season after undergoing surgery to repair a ruptured tendon in his right Achilles.
After drastically changing his body over the offseason and sharpening his game, Davis came into the season as perhaps the most hyped player on the roster. Early on, he showcased a much-improved game, scoring in double-figures in six of the first seven games of the season. The performance that stood out most came against Duke, when Davis put up 16 points on 6-of-7 shooting, bullying the heralded freshman-filled frontcourt of the Blue Devils.
Following the career-night against Duke, Davis’ production slowly declined as he struggled with foul trouble. In his last game against Wisconsin, Davis scored just two points in 10 minutes.
The recovery period for Davis is expected to be somewhere around six months, and he should be ready for his junior campaign.
On Thursday, Davis tweeted out a post-surgery photo where he looked to be in good spirits. We wish Davis the best during his recovery.

Indiana’s next game comes later this afternoon when the Hoosiers take on a veteran Northwestern (11-7, 2-3 Big Ten) team. Tip-off is scheduled for 4:30 p.m. eastern on CBS.
The Northwestern Wildcats came into the season returning nearly everyone from a 2016-17 team that made the second round of the NCAA Tournament. Expectations were high, and a Big Ten regular season title did not seem out of the question. But Chris Collins’ team struggled out of the gate and have yet to find their rhythm. Northwestern has yet to win a game over a Kenpom Top-50 team. Blowout losses include a 36-point defeat to Texas Tech, a 26-point clobbering at Oklahoma, and 15-point losses to Nebraska and at Penn State.
But downing the Wildcats will be far from a simple task for Indiana. The Hoosiers have struggled with consistency throughout the season and have been far from perfect on their home floor.
For Inside the Hall, Alex Bozich broke down the keys for Indiana:

The return of A.J. Guyton

There will be a very familiar face inside Assembly Hall tomorrow, although in a much different position. A.J. Guyton, the 2000 Big Ten Player of the Year for Indiana, will be on the Northwestern sideline.
Guyton, in the midst of his first season director of player development for Northwestern basketball, will make his first trip back to Bloomington since being inducted to the IU Athletics Hall of Fame in 2015.
Guyton, who scored over 2,000 points in his four years donning cream and crimson, spoke to Mike Miller of The Herald-Times about his impending homecoming.

It’ll be loud, and it’ll be great to experience it on the other bench and see what those other teams went through trying to win games in Assembly Hall. I’m excited to see the new things that the new building has to offer and to be in that moment. And honestly? I hope we pull the win out.

Get authentic Indiana apparel and merchandise from the Official IU Online Store. Shop licensed Hoosiers shirts, hats, hoodies, and Indiana accessories, including youth gear, to find the perfect gift for any fan … or yourself.
For quick access in the future, bookmark this URL:

The links in this section are affiliate links, meaning we earn a commission if you click on them and make a purchase. This makes it a great way to get great IU gear and support The Assembly Call at the same time. Thank you!

Even with the transfer of Curtis Jones, the Hoosiers have plenty of capable guards on the roster. The issue has been finding consistency from top to bottom.
Every guard on the roster has had their share of ups and downs throughout the season. Now without De’Ron Davis’ post presence for the remainder of the campaign, it will be incumbent on the guards to step up.
In a lengthy post for The Hoosier Network, a brand new site from IU students featuring IU sports content, Zain Pyarali breaks down the situation in the IU backcourt.

It’s time for Newkirk and Green to turn the page and become more consistent on the floor for the Hoosiers. Tuesday’s game against Penn State was the step in the right direction for both.
With Johnson having a down game just three-of-13 shooting, 10 points and four turnovers against the Nitanny Lions, Newkirk and Green were able to stabilize the backcourt. Newkirk put up 16 points; four assists with no turnovers and Green contributed 13 points with zero turnovers, as well.
They also both combined to make all eight free throw attempts in the final 25 seconds of the game to ice the win for IU.

Best of the rest

Before you go, a few updates on IU targets and commits:

And with that, the joy of hanging Banner #6 is now one week closer.
Thanks for your continued support for The Assembly Call. We’ll be back next weekend with a new roundup.
Now go enjoy yourself a 6-banner Sunday.