Welcome to another edition of 6-Banner Saturday, where we highlight the six most essential IU basketball stories of the past week.

This is Andy, filling in for Jerod. In this week’s edition:

Plus this week’s podcast episodes, the best deals on IU tickets from SeatGeek, what’s hot in the forums, another moment of #BoilerFail, the Tweet of the Week from Chuck Martin, and one more look at our IU Gear Deal of the Week.

Multiple Hoosiers asserting themselves as leaders in the offseason

Outside of the continued emergence of OG Anunoby as the team’s most entertaining interviewee, the importance of filling the leadership void left by the graduation of Yogi Ferrell was at the forefront of this week’s media availability.

Replacing all of the tangible things that IU’s now-departed senior point guard brought to the table last year has been top of mind for all Hoosier fans heading into this season, but the comments of James Blackmon Jr., Robert Johnson, and assistant coach Tim Buckley this week all touched on how important it will be to replace his leadership as well.

Blackmon mentioned trying to be more vocal and taking on more of a leadership role, a sentiment Buckley echoed about both JBJ and RoJo. The Indy Star’s Zach Osterman shared his thoughts on the additional responsibilities the backcourt duo will inherit this season.

Johnson also talked about Collin Hartman taking on a more vocal role as a senior, while Buckley singled out Thomas Bryant for channeling his passion into being a leader. As an IU fan, it’s pretty tough not to get excited about that idea.

Buckley went on to describe the leadership situation as “evolving,” which probably isn’t surprising to most Hoosier fans given the losses of Yogi, Max Bielfeldt, Nick Zeisloft, and Troy Williams.

We’ve all heard the adage “if you have two quarterbacks, you don’t have one,” but I don’t apply the same view to leadership — at least not at this point of the season. In fact, I find it encouraging that so many players are stepping up to fill the void, particularly with so many new faces on the roster.

Crean and former players have talked of the desire to have a player-driven program, and the comments of the players as well as Buckley seem to suggest this group has embraced that philosophy in the offseason.

As the season unfolds, I will be interested to see how the leadership situation continues to evolve, as I’m not sure having more leaders than you can count on one hand is viable long-term. Ultimately the true leaders of this team should emerge organically, and it’s hard not to picture Thomas Bryant playing a prominent leadership role. Who emerges to complement him as a leader is a storyline I’ll be following closely as the season unfolds.

Leadership wasn’t the sole focus of the session, which touched on a number of topics. Inside The Hall wrote up some of the key takeaways, but a few other things stuck out to me:

The Assembly Call is proudly sponsored by SeatGeek — the ticket search engine that makes finding tickets to Indiana basketball and football games a cinch.

Listed prices valid as of date this post was published — click link to see latest prices. Add our promo code ASSEMBLY to your SeatGeek account to receive a $20 rebate on your first purchase.

Our weekly 6-Banner Saturday IU basketball news roundups are for Assembly Call members only. … but membership is completely free.

Click here to join right now (it only takes 15 seconds). Then you can read this edition of 6-Banner Saturday in its entirety, as well as all future editions.

Already a member? Log in here and finish reading:

In addition to the weekly 6-Banner Saturday roundups, you will also get a bunch of other awesome IU-related stuff.
Learn more and join (for free) today!

It all gets started six weeks from today, as Hoosier Hysteria is now set for Saturday, October 22nd. More details will be shared as the event gets closer, but as always fans are encouraged to bring donations to the Hoosier Hills Food Bank.

In addition to getting a first look at this season’s squad, fans will also finally get to see the inside of the newly renovated Simon Skjodt Assembly Hall.

And while we tend to focus far more on the men’s team, I’m also excited to see how Teri Moren’s women’s team will build on last season’s undefeated home record and a first-round NCAA Tournament victory.

C.L. Brown continued ESPN’s series focused on important questions that will shape the season by wondering whether IU’s sophomore big man can fuel a trip to the Final Four. It’s just the latest in a growing list of features about Thomas Bryant and the lofty expectations for the upcoming season.

Some of the same leadership themes that came up in Banner #1 also emerge here, with Brown highlighting Bryant’s strong showing against Kentucky in the NCAA Tournament as a sign of his improved maturity over the course of the season and a hint of what’s to come as a sophomore.

Given IU’s personnel changes this season, there was also discussion of whether the Hoosier offense might shift its focus inside given the frontcourt depth on this year’s roster, a topic that would also be covered in this week’s Podcast on the Brink. Either way, Bryant seems poised to become the first Hoosier to lead the team in scoring and rebounding since Cody Zeller.

Jerod, Ryan, and I got together this week to address a great listener question about IU’s non-conference scheduling philosophy and break down key stretches of conference play. Then we debate the best IU players to don jersey numbers 0-5.

Podcast on the Brink

ESPN’s John Gasaway joined Jerod and Alex to discuss his outlook for IU this season, specifically his lofty ranking of Thomas Bryant, his expectations of the post-Yogi offense, and his initial impressions of the Big Ten.

Click here to visit the episode page for POTB 141.

Just in case our scheduling discussion on this week’s show wasn’t enough, it’s never to early to start thinking about next year’s home slate. And it sounds like Athletic Director Fred Glass is doing just that.

While we don’t know much about next year’s schedule, we do know of at least five games. The series with Louisville continues with a road date against the Cardinals, while Notre Dame will be back on the schedule in the Crossroads Classic. IU will also get two games against some combination of Washington, Virginia Tech, and Providence in the 2K Classic in New York, and a likely road date in the Big Ten-ACC Challenge rounds out what we know.

Glass declined to get into specifics, but Hoosier fans and season ticket holders will be thrilled if he can reel in a big name opponent to visit Assembly Hall.

A wide-ranging interview with the always #feathery Victor Oladipo

While Oladipo had not yet been named the greatest Hoosier ever to don the #4, the interview still managed to cover a lot of ground.

From a basketball perspective, Oladipo talked about his transition to OKC and his growing relationship with new backcourt mate Russell Westbrook.  While the Thunder weren’t able to keep Kevin Durant, I’m still excited to see what Oladipo can do with a better supporting cast and what hopefully is a more stable coaching situation.

Off the court, the interview touched on Oladipo’s experience with the Jordan brand, a potential recording career, the upcoming election, and his thoughts on whether Colin Kaepernick’s protests will carry over into the NBA. As always with Vic, his responses were thoughtful and revealed the well-rounded personality that made him such a beloved figure in Bloomington.

IU Gear Deal of the Week

Stay warm this fall with deals from the IU online store, including a wife-approved suggestion for our female readers.

Here’s this week’s deal and how you get it:

Below are two items we identified that qualify for the discount that you should consider.

This first item was suggested by Jerod’s wife. It would make a great just-because gift, or a buy-and-stash for Christmas. 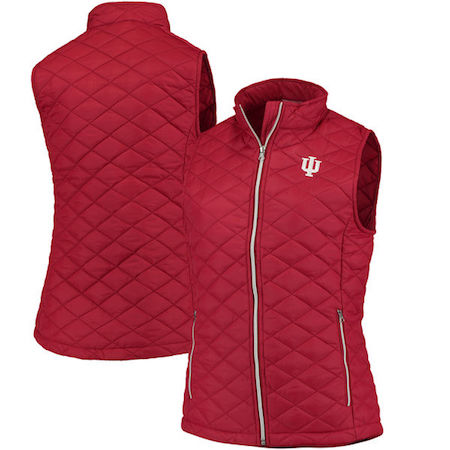 And for the gentleman, check out this fleece:

Omni-Wick™ pulls moisture away from the body and enables perspiration to evaporate quickly, keeping you dry and comfortable 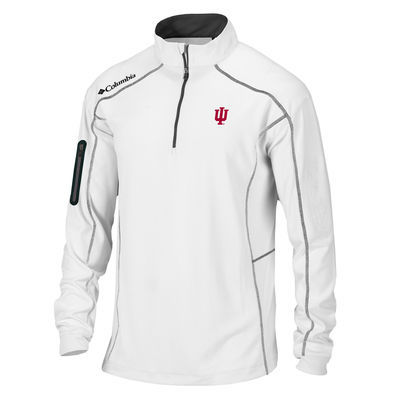 And now to Banner #6, the one we’re all anxiously awaiting being hung in the rafters of Assembly Hall someday soon …

I’m admittedly not one who fervently follows the recruiting trail, but it’s hard to ignore the consistent drumbeat of recruiting news this time of year. As such, a few key stories cropped up this week.

First, five-star forward Billy Preston has the Hoosiers listed among his five finalists with Kansas, Maryland, NC State, and USC rounding out the quintet. The 6-foot-10 recruit recently transferred to Oak Hill Academy for his senior season.

Finally, our friends over at Crimson Quarry posted a recruiting roundup earlier this week.

The Best of the Rest

CBS broke down the top five conference games from each major league, and the Hoosiers have a pair of tough road trips among the games selected for the Big Ten.

IU checks in at 13th in the Sporting News College Basketball preview magazine and are one of four Big Ten teams ranked in the 8-13 range. The Hoosiers were picked to finish fourth in the league.

ESPN rolled out campaign slogans for each of its Top 25 teams. Surprisingly, Purdue’s wasn’t “No seriously, we can make a Final Four. Why are you guys laughing?”

For your non-Seat Geek ticket needs, details are out about Holiday Break game packages.

And for those planning ahead for New Year’s Eve, the game time has been set for the Louisville game.

What’s hot in the forums?

Here are some active, interesting conversations in our members discussion forum that you should consider chiming in on:

And in this week’s edition of #BoilerFail …

Mo Egger is a sports talk host on 1530AM in Cincinnati and shared a geography-related #BoilerFail from his trip to West Lafayette, where UC’s 38-20 win gave the Bearcats their first road win at a Big Ten school since 1957.

Just prior to that Mike Tyson pick, I returned from a bathroom trip where I was asked by a press box staffer where in Ohio Cincinnati is.

Note: He is referencing Mike Tyson the defensive back for Cincinnati, not the boxer. The football Tyson was an honorable mention selection for the Jim Thorpe Player of the Week Award after securing three interceptions against Purdue.

Finally, this week’s Tweet of the Week from Chuck Martin

And with that, the joy of hanging Banner #6 is now one week closer.

Thanks for your continued support for The Assembly Call. We’ll be back next Saturday with a new roundup.