You are here: Home / Commentary / 4 Interesting Takeaways From the Early-Season Lineup Data 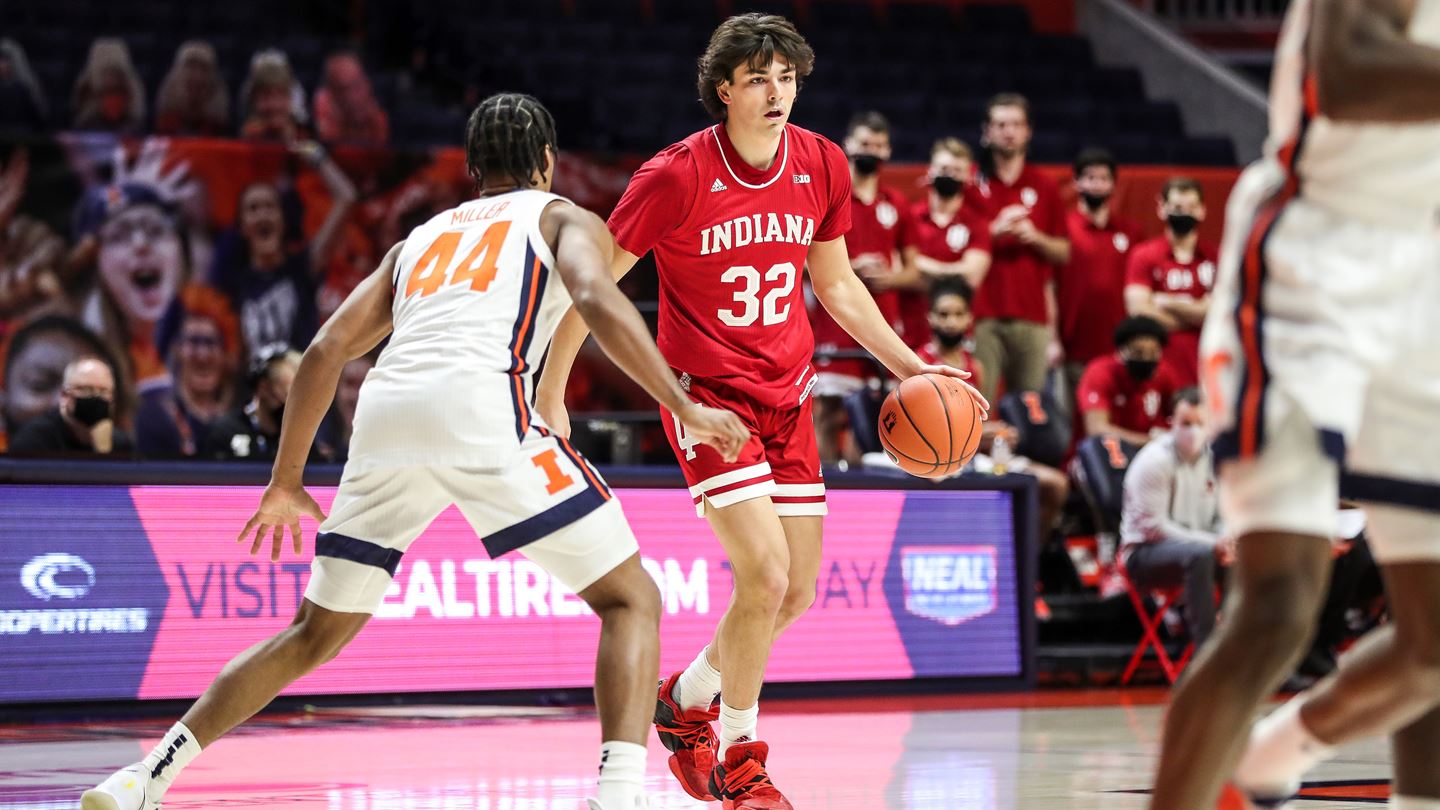 I treated myself to a new college hoops toy for Christmas: an account at Hoop Lens.

After spending some time clicking around and analyzing lineup data on the eight top-60 games Indiana has played in (record: 4-4), it seems there are a few things we’ve kinda/sorta* learned about this year’s Hoosiers.

* – The sample size is still pretty small, so everything in here should be viewed with that context.

Everyone knows that Trayce has the biggest impact on the Hoosiers’ overall play. But do you realize just how big the impact is? 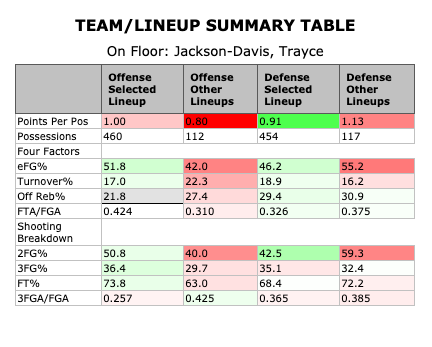 In the 112/117 possessions Indiana has played without Trayce, opponents have outscored Indiana by 0.33 points per possession.

That’s a massive swing of 0.42 points per possession. In other words, Trayce is the sun around which everything orbits this season and he needs to play as many minutes as he can reasonably handle.

2. Race and Armaan have been Indiana’s other two most impactful players … also by a lot

Here’s how the individual on/off data looks for all of Indiana’s players:

A few observations from this data:

3. Al and Rob playing together has been suboptimal so far this season

Based on the data above, you shouldn’t be surprised to learn that Indiana’s best four-man combination that has played significant time together has been Trayce, Race, Armaan, and Trey. 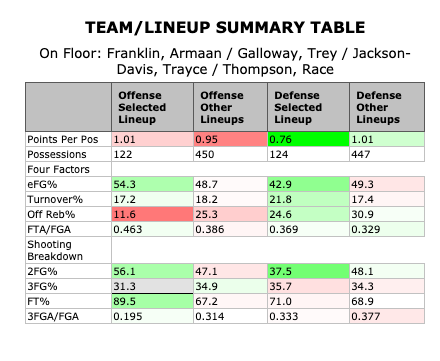 In their 122/124 possessions on the court, they are outscoring opponents by 0.25 points per possession. All other lineups are being outscored by 0.05.

But who is the best fifth man to pair with them?

So far, it’s been Rob Phinisee. 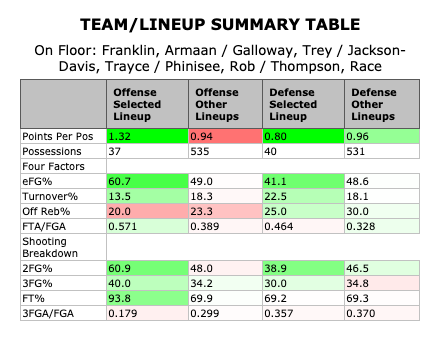 Indiana is dominating opponents by 0.52 points per possession with Rob, Armaan, Trey, Race, and Trayce playing together. It’s only 37/40 possessions, but it certainly blows away the alternatives.

In double the amount of possessions that Al has played with that group, Indiana’s offense has really struggled. Overall, the Hoosiers have only outscored opponents by 0.10 points per possession 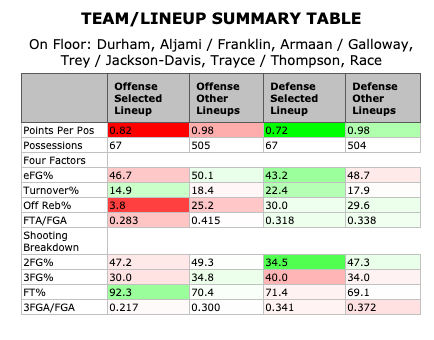 Neither lineup has a huge sample size, so I wouldn’t read too much into the data, but the difference is pretty stark.

The lineup that Indiana ended last night’s game against Penn State with was Rob, Al, Armaan, Race, and Trayce. Here’s how that group looks in 117/115 possessions: 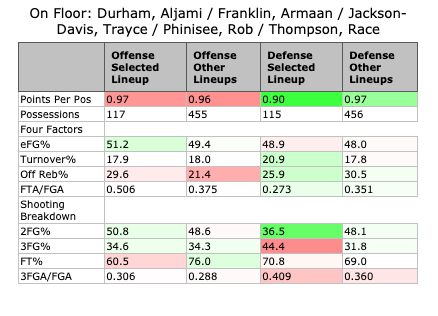 That group is only +0.07 … but it certainly came through when it mattered most!

The takeaway here, which shouldn’t be surprising given their early-season struggles, is that Indiana hasn’t been nearly as good with Al and Rob on the court together this season.

This is why Indiana has been better with Armaan and Trey on the court together: 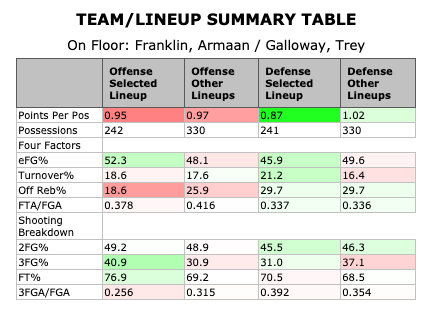 That offense is nothing to get excited about, but they compensate with solid defense.

Perhaps the Penn State game will signal a turnaround for Al and Rob. But until we see more consistent production from the two of them, Indiana seems better off minimizing the impact of their inconsistency by only have one on the court at the same time alongside Armaan and Trey.

One idea I’ve seen suggested, and even considered myself, is the possibility of Indiana playing small. This would mean playing just one of Trayce or Race, then surrounding them with four guards/wings.

The thought would be that this would open the offense some. The risk, of course, is that you sacrifice a lot of defense.

The numbers back this up.

Here’s what it looks like when Indiana plays with Trayce but without Race: 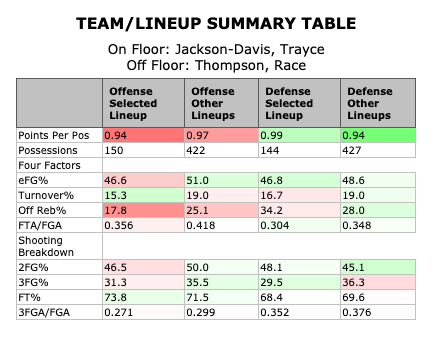 And here’s what it looks like when Race plays without Trayce: 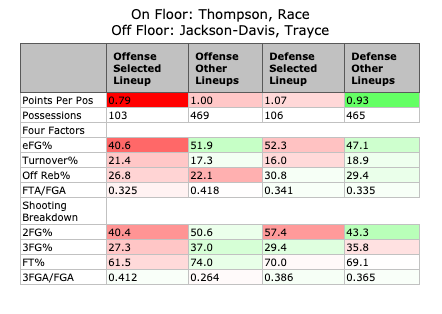 The problem with the “play small” theory with this particular team is that Indiana just doesn’t have enough guards/wings who are playing well enough offensively to offset the clear drop in defense. Plus, how would it affect Trayce’s offense without Race on the court to handle the most difficult defensive assignment in the post?

Until Jerome starts playing better, or both Al and Rob start producing consistently on offense, or Khristian Lander finally gets his sea legs, Indiana needs to play Trayce and Race as many minutes as they can handle.

What other takeaways do you have from this data? Or what questions do you have that I could dig into the data to answer?